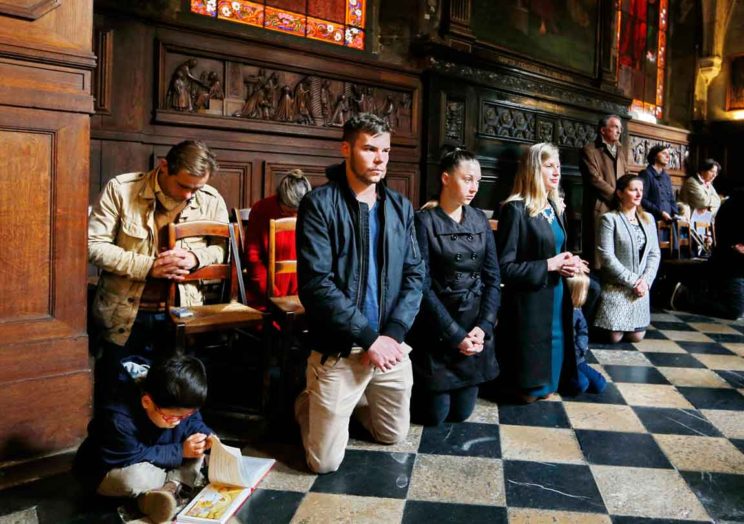 People kneel during a Paris Mass for the 129 victims of coordinated terrorists attacks. Catholic and Orthodox leaders have pledged to stand together against fundamentalism and terrorism, and to resist forces working to erode and destroy religious belief in Europe. (CNS photo/Paul Haring)

Catholic and Orthodox leaders have pledged to stand together against fundamentalism and terrorism, as well as resisting forces working to erode and destroy religious belief in Europe.

“Terrorist violence against people considered unbelievers or infidels is the extreme degree of religious intolerance – we unreservedly condemn it and deplore that such acts have developed in the soil of a misguided religious culture,” the church representatives said in a joint message.

“The constitutions of our states guarantee the fundamental rights of the human person. Nevertheless, in our societies, forces are always at work to marginalise or even erase religions and their message from the public space. We believe Europe needs more than ever the breath of faith in Christ and the hope it provides.”

The 14-point message was published after a meeting of the European Catholic-Orthodox Forum, co-chaired in Paris by Hungarian Cardinal Peter Erdo, former president of the Council of European Bishops’ Conferences, and Metropolitan Gennadios of Sassima for the Ecumenical Patriarchate of Constantinople.

It said Catholic and Orthodox bishops deplored “crimes that may have been committed in the name of religion,” but believed their churches should not be blamed “for attitudes of intolerance that are inadmissible nowadays, but used to be shared by societies in the past.”

“Our Catholic and Orthodox churches proclaim the centrality of the human person and of its dignity created in the image of God. … Human freedom is exercised to the utmost in the act of religious faith, which must always remain free,” said the statement from the forum, which was attended by Russian Orthodox Metropolitan Hilarion of Volokolamsk and bishops, archbishops and cardinals from 20 countries.

“Political power should not favour a particular religion but respect the supreme divinity which each religion names according to its convictions. … The state guarantees religious freedom for all, but is itself subject to a natural ethical order from which it cannot escape.”

The four-day meeting, co-hosted by Cardinal Andre Vingt-Trois of Paris and Orthodox Metropolitan Emmanuel of France, was the first since East-West ties deteriorated over Russian involvement in Ukraine.

The message said the meeting’s aim was “to demonstrate the convergence of Catholics and Orthodox on major issues of social ethics” and the will of both churches to stand together in the face of “unprecedented challenges and threats against Christianity.”

It added that the churches had no intention of “stigmatising the religion of Islam.” Noting that terrorists often were “socially disengaged young people,” it invited all youths to “commit themselves to building a fraternal world that excludes no one. We call on Muslim religious authorities to ensure there is no propagation of a systematically hostile image of the non-Muslim world.”

However, it added that religious freedom also faced “restrictive interpretation” and “more subtle forms of discrimination” in European countries, such as when Christians were “excluded from certain roles or professions,” denied the right to conscientious objection and subjected to “the media’s denigration of what is most sacred to some.”

The message said children should be “properly educated in their own religion and at the same time educated to respect the religion of others,” adding that schools not be places “for experimentation with anthropological theses without scientific foundation, like gender theories or certain ecological ideologies that go as far as transhumanism.”

A press statement from the Council of European Bishops’ Conferences said the forum had not tackled theological or doctrinal matters or replaced a separate Catholic-Orthodox theological dialogue commission, which is finalising an agreed document on papal primacy. By Jonathan Luxmoore Catholic News Service