The ‘Other Half’ of the Church 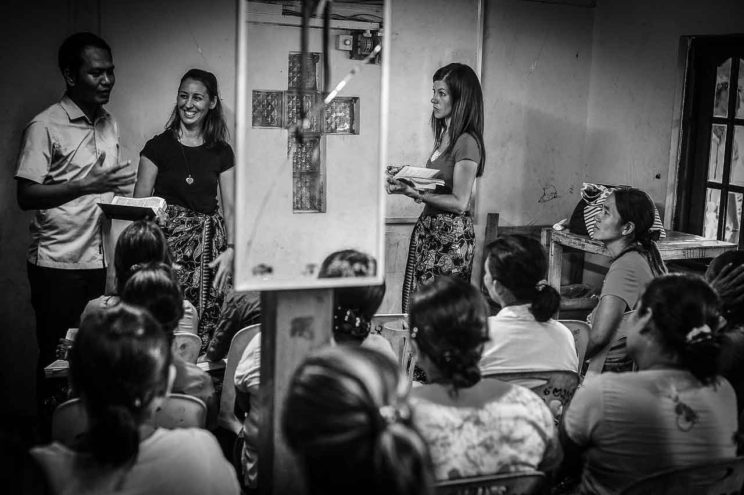 As you may have guessed from the headline this article addresses the subject of women and Vatican II. If Church statistics are reliable, it should in fact more accurately say, The majority of the Church, since it seems that in almost all places the vast majority of active Catholic laity are women.

While it is important, particularly in these times, to celebrate Vatican II, it would be remiss of me not to point out its gaps.

These gaps are not surprising, given that while a few women were observers at the Council after the first session, there were no women periti advising the bishops let alone, of course, women priests or bishops. Despite this, I suggest, the Council was, within its limitations, good news for women.

We have mentioned already the Council’s universal call to holiness (chapter 5 of Lumen Gentium), which emphasised that all are called to holiness, and implied that this was something universal: priest or lay, man or woman, important or unimportant, advantaged or disadvantaged.

Women, who are in the vast majority lay, disadvantaged and unimportant (at least according to those who hold power in our thoroughly unequal world) are seen by the Council as equally called to holiness, equally able, in theory at least, to be saints.

In its teaching on the laity, too, the Council implicitly affirmed women. Sacrosanctum Consilium, in affirming that all the people of God participated in the liturgy, did not distinguish between lay men and women in its claim. It is normal today for women to serve as ushers, lectors and extraordinary ministers of the Eucharist at Mass, and increasingly we see female altar servers.

That this has become more or less normal practice is illustrated by the following story.

I recall with delight an incident I observed in a London parish where the altar boys told the parish priest that if the visiting conservative celebrant objected to altar girls, they would be unavoidably unavailable to serve his Mass. To his credit, the visitor graciously acceded to the norms of the parish.

With regard to public life and the role of the laity, the Council (particularly in Gaudium et Spes) makes no gender distinctions. It simply says that the proper role of the laity in politics and business is to bring the moral insights of their faith into these sectors.

This goes even further: in Apostolicam Actuositatem lay people without regard to gender were called to be evangelisers in the apostolate of like towards like.

Indeed, given that this decree calls on laity to actively preach the Gospel in their contexts, one might infer that women are called to preach the Word to other women and men wherever and whenever the opportunity arises.

Of course, the most frequent references we think of with regard to women and the Church come in the parts of Gaudium et Spes relating to the family (47-52). Here the idea of the family as the basic unit of the Church is emphasised, as is the care of children and their nurturance in the faith.

Though this may seem quite traditional and even patriarchal, we should note that the vision of the Council regarding husband and wife is one primarily of partnership in rearing children.

While the issue of artificial birth control was removed from the Council’s deliberations, even the most ardent defender of the Pill would be at least a little dishonest to say that the Church’s subsequent teaching was wholly anti-women.

The availability of such birth control has given many men the idea that women are fair game, sexual objects rather than human subjects in their own right, and shifted the responsibility for managing conception unjustly on to women alone.

Perhaps the greatest weakness of the Council is that it did not devote a decree to women, though given the lack of women at the Council one suspects that it would not have been a particularly insightful document.

Subsequent papal and Church documents on women have affirmed most of what the Council taught implicitly about women, but they have been frequently criticised for what many women perceive as a kind of essentialism: women are primarily wives and mothers, nurturers of children, no matter how much the Church affirms their leadership roles in society.

One area never discussed at the Council, and currently prohibited from debate in Church circles, is the ordination of women. While there were rumblings over it before and after the Council from the St Joan’s International Alliance and in some of the writings of St Therese of Liseux (who deeply desired to be a priest, so much so that she is a patron of women’s ordination movements) it became a hot issue only from the 1970s onwards.

Currently the official debate has been suppressed. The official line is: it’s theologically impossible (though this was disputed by many theologians) and not to be discussed (which means, it seems, that everyone has an opinion, however ill-informed, but does not express it). Critics of the Vatican see this as a sign that the official line lacks substance which, ironically, we can neither affirm nor refute.

This issue casts a damper over the many good things the Church has to say about women. Despite the fact that the majority of active Catholics are women many of whom have no strong feelings on women’s ordination or in fact oppose it and despite the good things the Council said about women, the Catholic Church is frequently perceived as hopelessly patriarchal and irredeemably sexist.

Our challenge is to discern what can we do about that.

Our ‘Conscience Reigns Supreme’ – What does this really mean?

Can a Man be a Priest with Children?

Does the Church permits a priest to have children via in vitro fertilisation (IVF) or naturally before entering the priesthood. -Dmitri...