Religious Orders: Then and Now 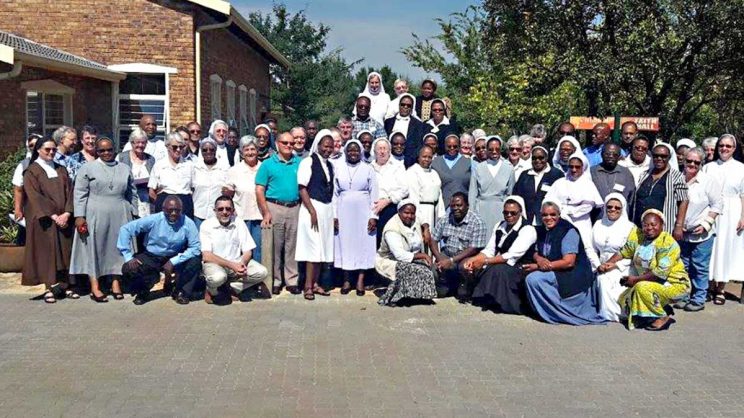 Delegates at this year’s’ AGM of the Leadership Conference of Consecrated Life. In the second and final part of his brief history of religious life in South Africa, Fr Anthony Egan SJ is looking at their work under colonialism and apartheid, where they are now, and what the future may hold.

Religious orders and congregations contributed heroically to the struggle against apartheid, but had a mixed record before then, as FR ANTHONY EGAN SJ explains in Part 2 of his brief history of the religious orders in South Africa.

By the 1960s religious orders and communities in South Africa grew increasingly aware and started to respond to the complex politics of a segregationist and apartheid state.

Certainly from the 1960s onwards, and reaching its climax in the ’80s, Catholic men and women religious took a strong and courageous stand against apartheid, a point well-documented elsewhere and thoroughly acknowledged by religious and secular activists from a range of political persuasions in the struggle.

From Fr Cosmas Desmond OFM, placed under house arrest in the 1970s for his stand against the state-forced removals in Natal, through priests like Frs Casimir Paulsen CMM and Theo Kneifel OMI who were exiled in the 1980s, to the many religious priests, Brothers and Sisters detained in the States of Emergency of the late 1980s, Catholic religious have suffered along with fellow anti-apartheid activists, spending time in hiding, a few even leaving the country.

Some religious became prominent figures in national opposition, a few joining the underground resistance too. The more scholarly ones served as advisors to Catholic youth and student activists, or developed a local form of liberation theology.

Religious communities hid activists — and for their troubles were raided by the Security Police. White seminarians were active in the anti-conscription movement, some openly embracing conscientious objection.

Among their white counterparts they were part of the few who had in the course of their formation lived and studied with black people, been into townships and seen the black experience of apartheid on the ground. In short, they lived in microcosm the future that 1994 promised (though admittedly has not fully delivered).

But this was not always the case.

Given the hostile anti-Catholic culture of 19th-century South Africa and the cultural assumptions of European superiority that permeated the Irish, Dutch, English, French and German home environments of the congregations that came to South Africa, a certain degree of racism was inevitable.

Social Darwinist theories of human evolution that presumed the supremacy of Europeans was common. Catholicism itself was not immune to any of this, despite official opposition to Darwinism and notwithstanding the presupposition that all baptised Catholics were equal in the sight of God.

Catholicism, like all other forms of Christianity in the colonies, was deeply rooted in European Greco-Roman philosophy — so much so that adaptation of the faith to non-European thought systems was unthinkable.

Christianity had even distanced itself from its Jewish roots, thoroughly “othering” the Jews in the process, giving rise to varying levels of anti-Semitism. This perhaps largely unconscious racism permeated the practice of religious orders and diocesan clergy in South Africa.

There was a presupposition that African Catholics were “new Christians”, still quite unlettered in the faith and needing firm guidance.

This manifested itself in how rural missions and parishes in “locations” were managed, in the manner in which students were taught in schools, and in the early 20th century how some missionaries, genuinely committed to the development of African Catholics, steered them away from nationalist movements and trade unions towards “Catholic” organisations that they could properly lead.

The other current of thought was the difficulty Africans would have adjusting to the Church’s (Roman plus English, Irish, French, German or Dutch) culture — the idea that cultural adjustment could be mutual seemed unthinkable!

In terms of the congregations and dioceses themselves, it led to a decided unwillingness until the early 20th century to consider admitting African vocations.

The first generation of black diocesan priests, who were ordained around 1900, experienced profound difficulties with bishops and superiors.

African candidates for women congregations were either dissuaded or sent to “diocesan congregations” or orders formed by European Sisters for the purpose of fostering local vocations.

Among some men’s congregations — not all, one must note — aspiring priests were nudged towards the dioceses or admitted as Brothers, then seen (quite contrary to any sound theology of vocation) as a “consolation prize” for men who couldn’t quite make priesthood.

Though many of the orders made adjustments in the 20th century, the damage was done. Many vocations were lost. As religious life globally started to decline from the late 1950s onwards and the supply of missionaries from the North started to dry up, many orders began having to close and consolidate communities, or even consider whether their presence was still viable.

I think it would not be an exaggeration or even an expression of pessimism to say that, as in most of the Catholic Church worldwide, religious life in South Africa is in decline.

It would also be true to say that, compared to the Church elsewhere in Africa and the world, young men and women entering the priesthood and religious life was never high.

Many factors account for this, apart from the tragic short-sightedness of many orders mentioned above. The commonly cited reason — mandatory celibacy — is not the only other major factor. Perhaps the kind of people most likely drawn to monasteries, convents and the apostolate — particularly those who had been  well-educated in Catholic schools—were the very people on whom parents and families depended. The sense of duty to family might have drawn many away.

Similarly, the urgency of South Africa’s political situation, the struggle for liberation. Though it certainly drew some to religious life as an expression of service and the promotion of Christian values of justice, the struggle may have drawn others away — to living out the same values in trade unions and political movements, and ultimately in the new struggle for building democracy and a more equal society.

Finally, I sense a certain anarchic quality in the South African psyche that makes the idea of obedience — even obedience rooted in dialogue and discernment with superiors — a little alien.

Whatever the case, religious life in South Africa is, by anyone’s estimation, in general decline. There are fewer local priests, whether diocesan or religious, and still fewer Brothers and Sisters.

Most orders are ageing. Many have had to close down works — handing over in many cases schools and hospitals to lay Catholics or the state. Some orders have done this while still having members on boards of governors and working to promote the original “ethos”.

A chance to reinvent

While obviously traumatic, religious congregations have at their best seen this crisis as an opportunity: to get back to original charisms or to move into new apostolates, new responses to the signs of the times.

During the time of missionary expansion, many congregations of priests became tied up with dioceses, serving territories sometimes as the only (or nearly the only) clergy there. There are still such areas and congregations that work in this apostolate. Other orders have withdrawn partly or fully from such work, discerning in the light of particular charisms where the needs of the times meet their founders’ visions.

New circumstances have created new works. Religious have been in the forefront of the Church’s work in HIV antiretroviral rollout and some communities have shifted focus from hospitals to home-based care.

Other religious communities have come to see the importance of communication, including new technologies, in evangelisation.

Within these circumstances, and faced with declining numbers, religious have more than ever to cooperate with lay people, with folk outside the Catholic Church — and even between religious congregations.

All this points, ironically, to a renewal of religious life that though not fully envisioned by Vatican II’s call, expresses the essence of what the Second Vatican Council called the whole Church to be.

n This article was produced in association with the Leadership Conference of Consecrated Life SA to mark 200 years of the Catholic Church’s establishment in South Africa. Part 1 of Fr Anthony Egan’s history appeared in the issue of October 14.