A Brief History of religious Orders in South Africa 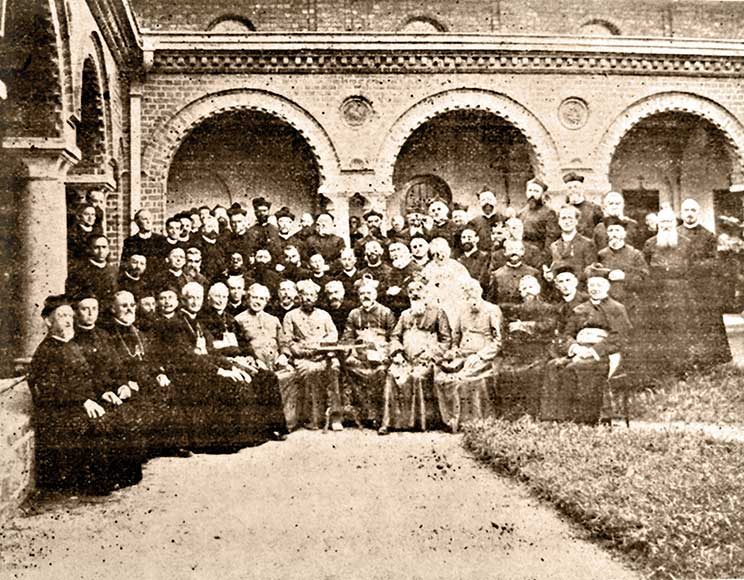 Religious orders and congregations did not just help build the local Church but also the country. Fr Anthony Egan SJ gives a brief history of religious life in Southern Africa.

It is almost impossible — in even a long-ish article such as this — to cover in depth the work of religious orders and congregations of Catholic women and men in South Africa.

This is a brief overview that looks firstly, and primarily, at the establishment and some of the founding works of some of these orders.

In the second part, to run in a fortnight, I shall examine how these congregations engaged with segregation and apartheid, before looking finally at the current state of religious life today.

Religious congregations of men and women came to South Africa from the mid-19th century. For the sake of giving form to an abundance of detail, I divide this into four “eras”, the first two of which I consider most significant in creating the forms (mainly active, occasionally contemplative) and focuses (mission, pastoral, education, health care) of the practice of religious life in the country.

In roughly the first 25 years, only a handful of orders, usually very small in number, arrived. Six Assumption Sisters and postulant — the very first order in the country — arrived in Grahamstown at the behest of Bishop Devereux, specifically to set up a school for Catholic girls.

The superior, Sr Marie-Gertrude, had grown up in Brussels’ high society before entering the convent, a major asset in Bishop Devereux’s eyes for creating educational excellence on the Cape frontier.

The second order to arrive were the Oblates of Mary Immaculate, a congregation of priests destined for mission work and building up the Church in Natal. Once again, it was Devereux’s initiative. He had asked the Jesuits initially, and the Spiritans, but the former were already overstretched in their work—particularly since their restoration in 1814 they had been trying to re-establish themselves in many of their earlier apostolates.

The Oblates’ response had a major impact on the growth of the Catholic Church in South Africa—and, indeed, on the history of the congregation itself.

In the century and a half that followed, South Africa would become one of the two biggest apostolic areas of the Oblates (the other was Canada), with the congregation spreading from Natal north and westwards through the Free State, Lesotho, Transvaal and the Northern Cape.

This area would be divided up into a number of provinces, with hundreds and priests and Brothers who would eclipse the other men’s orders — and diocesan clergy — by their sheer size.

It was by no means easy. The early years in Natal were hard for the few Oblates who pioneered the way. Their superior, Bishop Jean Francois Allard OMI, in what became the Natal vicariate in 1850, would have multiple worries, not least financial.

Following the first religious congregations in this early phase were two congregations of Dominican Sisters (in 1863 and 1877), the Holy Family Sisters of Bordeaux (1864), the Loreto Sisters (1878), and the French-founded Marist Brothers (1867).

What made these congregations distinctive was their common commitment to founding schools throughout the Cape Colony.  The Sisters also started up hospitals, particularly in small towns where public health care was limited or non-existent.

Following this pattern, the last religious community in this period, the Society of Jesus, also came to South Africa initially to start a school.

Having turned down the opportunity to be the main missionaries to Natal, the Jesuits were recruited in 1875 to run St Aidan’s College, the Catholic diocesan boys’ school in Grahamstown. For the next 98 years there would be a contingent of Jesuits in Grahamstown, most of them teaching at St Aidan’s. It closed by the mid-1960s with the school financially strapped.

In the next 30 years of religious congregation foundation in South Africa, similar patterns emerged. Sisters’ focused mainly on schools and nursing or working on new missions in southern Africa (including movement into Lesotho and Swaziland).

Male congregations were primarily missionaries in the expanding territories that would in 1910 become the Union of South Africa and the British Protectorate States: Basutoland (Lesotho), Bechuanaland (Botswana) and Swaziland (Eswatini).

A few, like the Irish-founded Christian Brothers and the Salesians of Don Bosco, focused on education and pastoral care, the Salesians placing particular emphasis on mainly urban ministry focused on schools and skills training for boys from poorer backgrounds or coming from difficult home situations.

The role of the Sisters — as teachers and in health-care — is particularly significant in this period for a number of reasons.

In the first instance, wherever the Sisters went — whether Dominicans, Holy Family, Holy Cross, Nazareth, Augustinians, Ursulines, etc—the pattern was familiar: set up a community, build a school (the latter two sometimes simultaneously), and often set up a hospital or clinic.

Often these would be set up adjacent or close to the local church,  building up in the process a kind of Catholic “centre” in places were Catholics were more often than not in a minority.

Many of the schools were ”open” schools, where all races could attend. As time passed and formal, legislated segregation grew — and often as the Sisters themselves were drawn into the colonial establishment — the Sisters would set up satellite schools in the “locations”  outside the white town centres.

Another policy the Sisters followed in schools was the frequent (often intentional) inclusion of non-Catholics.

This openness to Protestants was often a powerful way for them to thaw the mutual tension between Protestant and Catholic. In some places where Catholicism was for parts of the 19th century still a prohibited religion — like the early Transvaal Republic — Catholic schools (and sometimes hospitals) run by the Sisters served to open up relations.

The Dominican Sisters’ school in Potchefstroom was initially viewed with deep suspicion by the Calvinist authorities but since it was about the only school in the country at one point, even dominees sent their children there. From a cool beginning, relations between the sisters and the Zuid Afrikaansche Republiek warmed. And the toleration of Catholicism soon followed.

Similarly in medicine, many congregations helped to improve health care, in missions and in towns. Mission hospitals developed from humble beginnings into major concerns.

Perhaps the most significant in the 19th century was the hospital the Holy Family Sisters started in Johannesburg, the mining camp that became a great city in a few years of gold rush.

Medical facilities when they arrived was poor to almost non-existent. The first major hospital, in which these Sisters cared for sick miners and their families without regard to race (to the shock of many a white observer), became the city’s first general hospital.

When the state took it over, there was a shock in store for the Sisters: the government no longer accepted their French nursing qualifications, demanding instead training along British lines. Some Sisters retrained; others were required  — in a supreme irony for those who had worked there for years — to become assistant nurses.

The most significant event in this period for religious men began with a swop of a mission station that ultimately created South Africa’s first local men’s congregation.

Thirty Trappist monks from Germany and Austria-Hungary, led by Abbot Franz Pfanner, set up a monastery and farm on the Sundays River near Port Elizabeth in 1880.

When the Jesuits decided to extend their missionary work into southern Africa beyond the Transvaal Republic (where they were not welcome), the Trappists passed on the farm at Dunbrody to the Jesuits, who turned it into a centre of formation and base for their “Zambezi Mission”. The Trappists moved to Natal, near Pinetown, outside Durban, where Pfanner acquired land which he called Mariannhill and re-established the monastery.

While the Zambezi Mission ultimately led to a strong Jesuit presence in Southern Rhodesia (Zimbabwe), Dunbrody was an ongoing disaster, leading to the Jesuits having to sell the land by the 1930s.

Meanwhile at Mariannhill, Pfanner realised that the contemplative life could not be maintained amid what he saw was the urgency of mission work among the amaZulu. The monks became missionaries, very successful missionaries, but the Trappist Order objected. In 1909 the monastery was turned by the Vatican into the Congregation of Missionaries of Mariannhill.

The third great phase of religious congregations in South Africa — from after 1902 to the 1960s — saw once again an influx of religious orders and communities of men and women.

The Sisters were not to be outdone either: the Notre Dame (1907), Franciscan and Capuchin (1922, 1932, and 1955), Holy Cross (1937), Schoenstatt (1934) and other communities arrived. Contemplative Carmelite Sisters also set up convents (from 1931) – and became the makers of altar breads not only for Catholics but ultimately for many Protestant churches.

In the last phase in my structure, from the 1960s to the present day, more communities followed, often highly specialised groups who were moving away from the conventional  works of  mission  and pastoral ministry (for men), education and health care (for women).

These conventional works were themselves shifting, no longer reflecting the tasks of a Church being built, but of a truly local Church coming of age: from charity to development, from parish-based pastoral work for the most part to often specialised work with youth and students, and from the 1980s onwards a mission overshadowed by the struggle against apartheid and the battle against HIV and Aids.

Even in the post-apartheid era  new challenges — notably refugees and migrants — as well as perennial struggles about poverty and development occupied new congregations like the Missionary Sisters of Mary Help of Christians (arrived 2001), Sisters of St Vincent de Paul (2004) and the Kiltegan Fathers (1989).

During the last period (1960s to the present) the religious orders and communities in South Africa grew increasingly aware — and by the 1960s started to respond — to the complex politics of a segregationist and apartheid state.

This article was produced in association with the Leadership Conference Of Consecrated Life SA to mark 200 years of the Catholic Church’s establishment in South Africa.