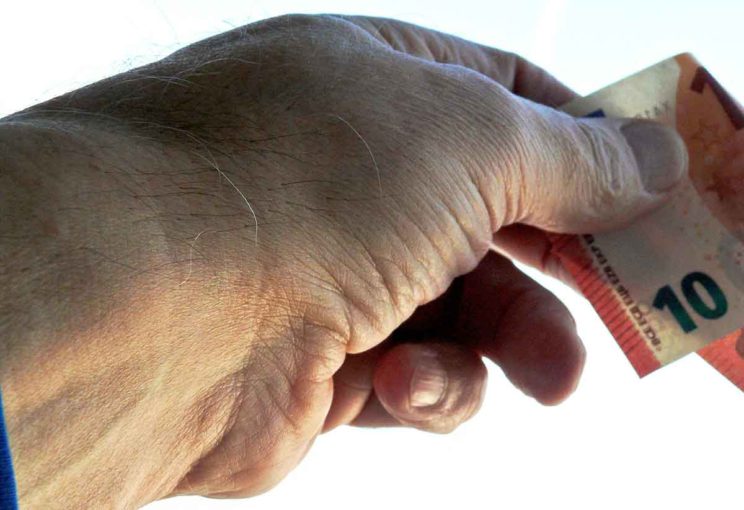 Father Chris Townsend is a priest who tithes. Here he explains how this practice has become a part of his life

I give a tenth of my income as a thanksgiving to God. This is not for some magic hocus pocus prosperity church “theology”, but as a considered act of thankfulness for the goodness of the Lord.

I don’t do it to get anything, but because I have got so much as blessing, and the only response is thankfulness.

I’ve undergone a gradual conversion to the idea of a full tithe. This has not been an easy process and there have been major thought challenges on this journey.

I also don’t write about this here to show off, but simply as an invitation for Catholics to look more closely at the practical thanksgiving that we participate in together.

My tithe, or tenth, is given to the parish where I am the pastor for the work of the Church. (For those interested, my tithe number on the parish reporting for “Planned Giving and Tithing” is 21.)

Many will talk about a “tenth” of “time, talent and treasure”. This is an important concept and I fully support this idea. But today I’m focusing only on the “treasure” part.

As a young priest in Soweto, I participated in an extended discussion on the Kabelo/Isondlo programmes — essentially a church dues initiative. The problem was that thought on this had stagnated and that the dues were set at a monthly contribution of R2 or R5.

Often, Catholics would contribute nothing more than that, lulled into complacency by the “poor-and-black” mentality of missionaries who were no longer there, but whose condescension had become ingrained.

In the Soweto deanery, we eventually came to the point of suggesting that the offering be 2% of what a person earned. This programme of giving helped the Soweto deanery come to the deeper self-sufficiency and ownership of the Church.

And yet, this was not the end of my journey. In Coronationville, the idea of the Tenth began to bug me. In that community, as in many others, the Church was haemorrhaging Catholics to Prosperity Churches.

If you’re struggling, the promise of untold wealth for little effort except faith in a pastor and giving a tenth seemed like a formula for success. Many would leave the Church and happily part with a tenth. And then return and never do that again — until they left for the next pastor.

It is here that I decided that I couldn’t ask for a tenth without giving a tenth. So I started — and haven’t stopped since.

The needs of our communities are great. I firmly and passionately believe the Catholic Church is the best-placed organisation to do something about the needs.

Yet, we are severely hampered by the institutionalised giving mentality of many Catholics. They were given a tickey to put into the plate in 1922 and have never grown up. They still put in a tickey…

Many of the services that the tithe in the Kingdom of Israel, as we know from Genesis, was to cover are now covered by the state and its tax collection: infrastructure, health, education and welfare. But the tithe was never about a tax — there is a clear distinction between a tithe which is personal and voluntary (no, not like eTolls) and taxes which are part of the social system. Expected and extracted.

Our giving is an offering of gratitude to God for God. Basically. It’s an injunction that Our Lord never rescinds in his preaching. In fact, he reinforces the principle I believe in the way that the “Render unto God” idea is counter-posed to the “Render unto Caesar” idea. Caesar was tax and force, unto God was a generosity born of mindfulness and thanksgiving.

Being unafraid to face this as a Catholic has been deeply liberating to me. I give to the parish not because I know how much it costs to run it. It has been a three-year struggle to produce clean financials in my parish. That’s not the point. The point is that I believe in the Church and my tenth is my act of “paying it forward”, a way that I can offer to those I can see a sign of the generosity of the God I can’t see.

I recently participated in a dialogue at a fantastic church in Randburg. It was an amazing experience. Many, many people employed full-time. An amazing campus. Well-organised, smooth-running.

Many will defensively argue that they give a lot to family and charities. I trust their generosity. But the tithe is not about charity or family—it is a personal, considered choice. You may not be able to tithe a tenth because of your commitments and debt and school fees and medical aid. I understand. I’m not asking for what you can’t do. Each must give, as St Paul says, accounting to their heart. I know where my heart is pushing me.

So to tithe is to give a tenth of one’s income (cash and cash equivalents) as a “pay-it-forward” in thankfulness. Not a due, not a tax, not a pressure nor a force. Simply as a way of saying: “I’m so blessed in so many ways — and I want to share that blessing.