Christians Must Stand up as Bridge Builders 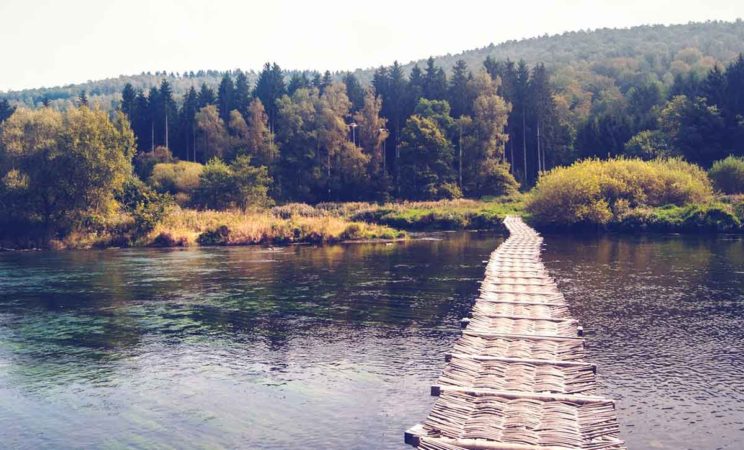 Christians must firmly send the message that they believe in building bridges, not walls, said Archbishop Angelo Becciu, a top official in the Vatican Secretariat of State.

When asked about U.S. President Donald J. Trump’s recent actions on immigration, the archbishop said, “Certainly there is concern. We are messengers of a different culture, that of openness.”

Speaking on the sidelines of an event in Rome he told TV2000, the television channel of the Italian bishops’ conference, that even though the pope also emphasizes the importance of a community’s “ability to integrate those who arrive, those who arrive in our society and culture,” it still stands that “we are builders of bridges, not walls.”

“All Christians must be strong in reaffirming this message,” he said.

Pope Francis, himself the son of Italian immigrants who moved to Argentina in the 1920s, has long spoken of the need to protect the rights and dignity of migrants and refugees. Here is a sampling of his most forceful pronouncements:

– “A person who thinks only of building walls, wherever it may be, and not of building bridges, is not Christian. This is not in the Gospel.” (Pope Francis with reporters on papal flight from Mexico to Rome Feb. 17, 2016).

– “That contradiction of those who want to defend Christianity in the West, and, on the other hand, are against refugees and other religions. … It’s hypocrisy to call yourself a Christian and chase away a refugee or someone seeking help, someone who is hungry or thirsty, toss out someone who is in need of my help. If I say I am Christian, but do these things, I’m a hypocrite.” (Pope Francis meeting with Lutherans from Germany at the Vatican Oct. 13, 2016).

– “Unfortunately, today’s context of economic crisis prompts the emergence of an attitude of closure and not of welcome. In some parts of the world, walls and barriers are appearing. Sometimes it seems that the silent work of many men and women who, in different ways, strive to help and assist refugees and migrants is overshadowed by the noise of others who give voice to an instinctive selfishness. Closure is not a solution, rather it ends up encouraging criminal trafficking. The only path to a solution is solidarity.” (Pope Francis catechesis on “welcoming the stranger” at his general audience, Oct. 26, 2016).

“It is not human to close the door, it is not human to close the heart, and in the long run, a price is paid for this. Here, the price is political, just as a political price can be paid for an imprudent judgement, for accepting more than can be integrated. What is the danger when refugees or migrants — and this applies to everybody – are not integrated? They become a ghetto. A culture that does not develop in relationship with another culture, this is dangerous. I think that fear is the worst counselor of countries that tend to close their borders, while the best counselor is prudence.” (Pope Francis with reporters on papal plane from Sweden to Rome Nov. 1, 2016).

– “When the stranger in our midst appeals to us, we must not repeat the sins and the errors of the past. We must resolve now to live as nobly and as justly as possible, as we educate new generations not to turn their back on our ‘neighbors’ and everything around us. Building a nation calls us to recognize that we must constantly relate to others, rejecting a mindset of hostility in order to adopt one of reciprocal subsidiarity, in a constant effort to do our best. I am confident that we can do this.” (Pope Francis to the joint meeting of the U.S. Congress, Sept. 24, 2015).

– On the refugee crisis: “We must not be taken aback by their numbers, but rather view them as persons, seeing their faces and listening to their stories, trying to respond as best we can to their situation. To respond in a way which is always humane, just and fraternal. We need to avoid a common temptation nowadays: to discard whatever proves troublesome. Let us remember the Golden Rule: ‘Do unto others as you would have them do unto you.'” (Pope Francis to the joint session of the U.S. Congress, Sept. 24, 2015).

– Martin Luther King’s “dream was that many children, many people could have equal opportunities. His dream was that many children like you could get an education. He dreamed that many men and women, like yourselves, could lift their heads high, in dignity and self-sufficiency. It is beautiful to have dreams and to be able to fight for our dreams. Don’t ever forget this.” (Pope speaking with children and immigrant families at a Catholic school in Harlem, N.Y., Sept. 25, 2015).

– “No American institution does more for immigrants than your Christian communities. Now you are facing this stream of Latin immigration which affects many of your dioceses. Not only as the Bishop of Rome, but also as a pastor from the South, I feel the need to thank and encourage you. Perhaps it will not be easy for you to look into their soul; perhaps you will be challenged by their diversity. But know that they also possess resources meant to be shared. So do not be afraid to welcome them. Offer them the warmth of the love of Christ and you will unlock the mystery of their heart. I am certain that, as so often in the past, these people will enrich America and its church.” (Pope Francis to U.S. Bishops in Washington, D.C., Sept. 23, 2015).