Fixing Up Our Holiest Churches

In February, Southern Cross editor GÜNTHER SIMMERMACHER made a private visit to the Holy Land. In the third of a series of six articles, he witnesses the renovations in the place of Jesus’ birth. 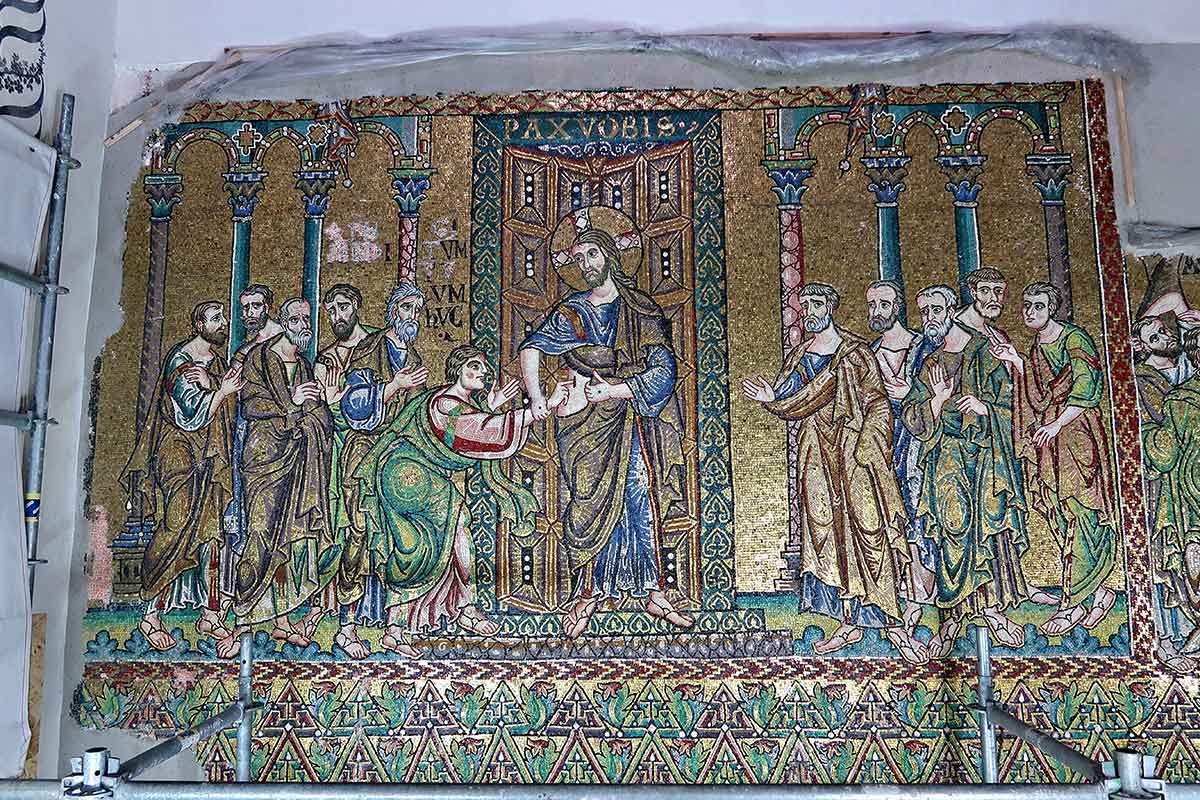 A newly-restored 12th-century mosaic of St Thomas inspecting Jesus’ wounds in Bethlehem’s Church of the Nativity. Soot, dust and rain damage accumulated over centuries had made the mosaic almost invisible from the bottom of the church. (Photo: Günther Simmermacher)

On the facade of Jerusalem’s church of the Holy Sepulchre, on the right window, stands a ladder that has not been moved in more than two centuries — because nobody can decide who has the authority to move it.

The problem is that virtually every crevice in Christianity’s holiest place — the site of Christ’s crucifixion and resurrection — is allocated to one of the several churches that occupy it. And the ladder stands on a cornice that belongs to the Greek Orthodox Church, but the window it leans against is Armenian. This means — to the churches, at least — that whoever moves the ladder could claim sovereignty over that particular possession. And if you let go of your possession of a little ledge, what else will you be asked to surrender?

The absurdity is rooted in an 18th-century ruling imposed by the Ottoman sultan, which conveniently gave all the best spots to the Greek Orthodox Church after they had invaded them on Palm Sunday 1753. The Status Quo, as it is called, has held, even though it has resulted, even in recent times, in physical brawls which required police intervention. 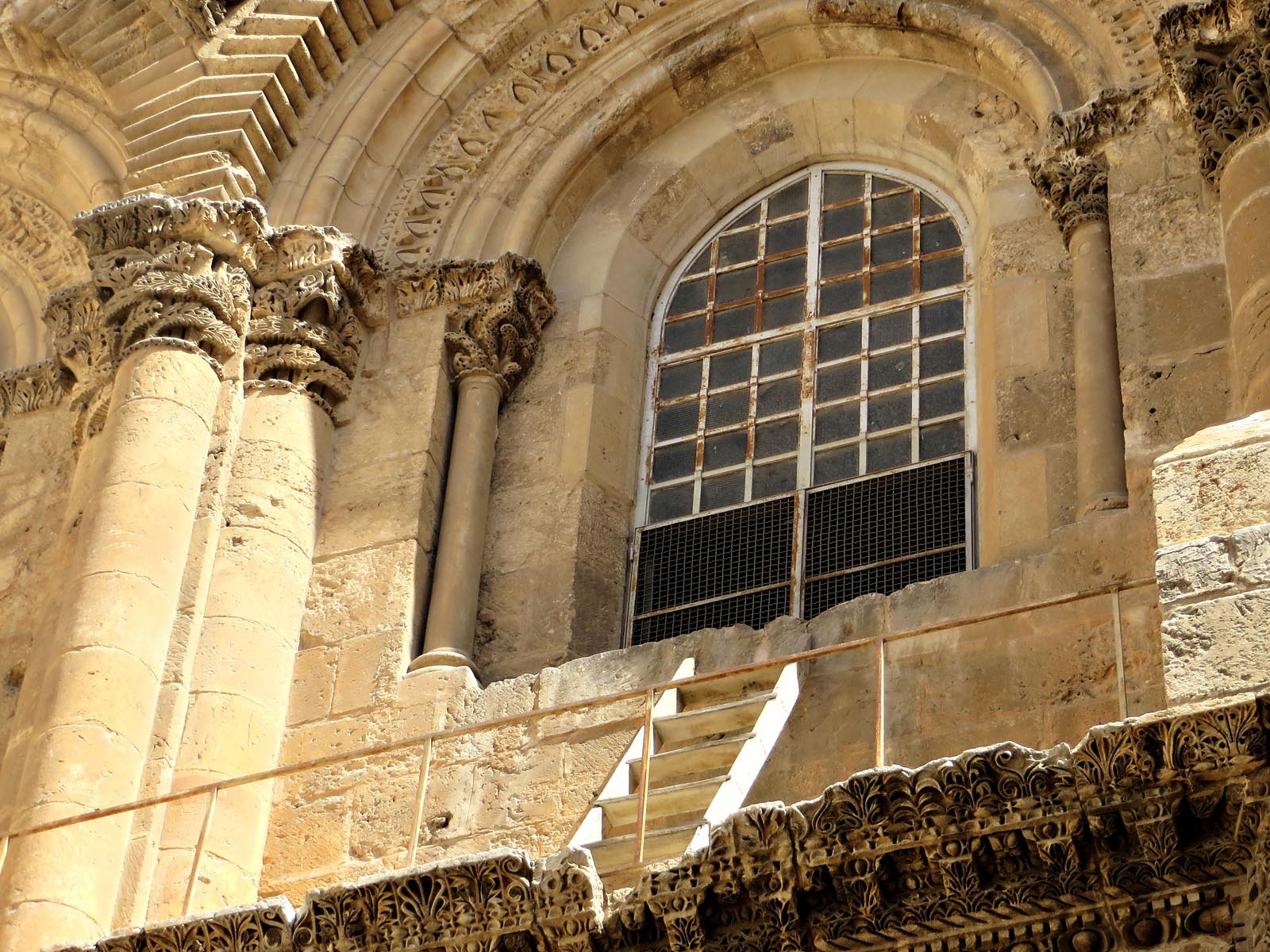 The ‘immovable’ ladder of Jerusalem’s church of the Holy Sepulchre. (Photo: Günther Simmermacher)

While the local Palestinian Christians coexist in exemplary harmony, the monks and clerics at the church of the Holy Sepulchre and in Bethlehem’s church of the Nativity, which is also subject to the Status Quo, are learning only slowly to rise above petty antagonism.

So it can be called a sign of remarkable progress that both holy churches have been undergoing renovations at the same time.

In the case of the Jerusalem church, which was re-built by the Crusaders and consecrated in 1149, it was a case of safety. The edicule — the building within the church that houses the tomb of the resurrection — threatened to collapse. The structure, built in 1808, had already been held together by unsightly steel girders placed there in 1934.

In the face of possible disaster, all the resident denominations had to agree to agree. The renovations, during which pilgrims still had access to the tomb, were carried out by the National Technical University of Athens. The restored edicule was revealed in late March.

As part of the renovations, archaeologists were permitted to lift the marble slab that covers the rock ledge on which the crucified Christ was laid and from which he rose. It was the first time since 1555 that it had been revealed. I wrote about what the Franciscans found at that time in my book, The Holy Land Trek. The latest opening was documented by National Geographic. I’m anxious to learn what exactly they found.

Excitingly, a small window has been created to allow us a view of the original rock of the tomb.

Bethlehem’s church of the Nativity, since 2012 a UNESCO world heritage site, was also in urgent need of renovations because of the deterioration of the roof.

Here the Palestinian government took charge in marshalling the resources for a comprehensive makeover for the church, which was first built in the 4th century and rebuilt in the 6th century.

It took some pressure from Palestinian President Mahmoud Abbas to have the churches agree to the renovation plan. No church is running the renovations, even if some — like the Vatican and the Russian and Armenian patriarchates — have contributed funding.  Much of the financing is sourced locally, from Christian and Muslim Palestinians.

Apart from securing the roof (and making it earthquake-proof), replacing windows, cleaning up the exterior stone facade and interior walls, and so on, the international team was also tasked with restoring ancient artworks. And that’s where things get quite exciting. 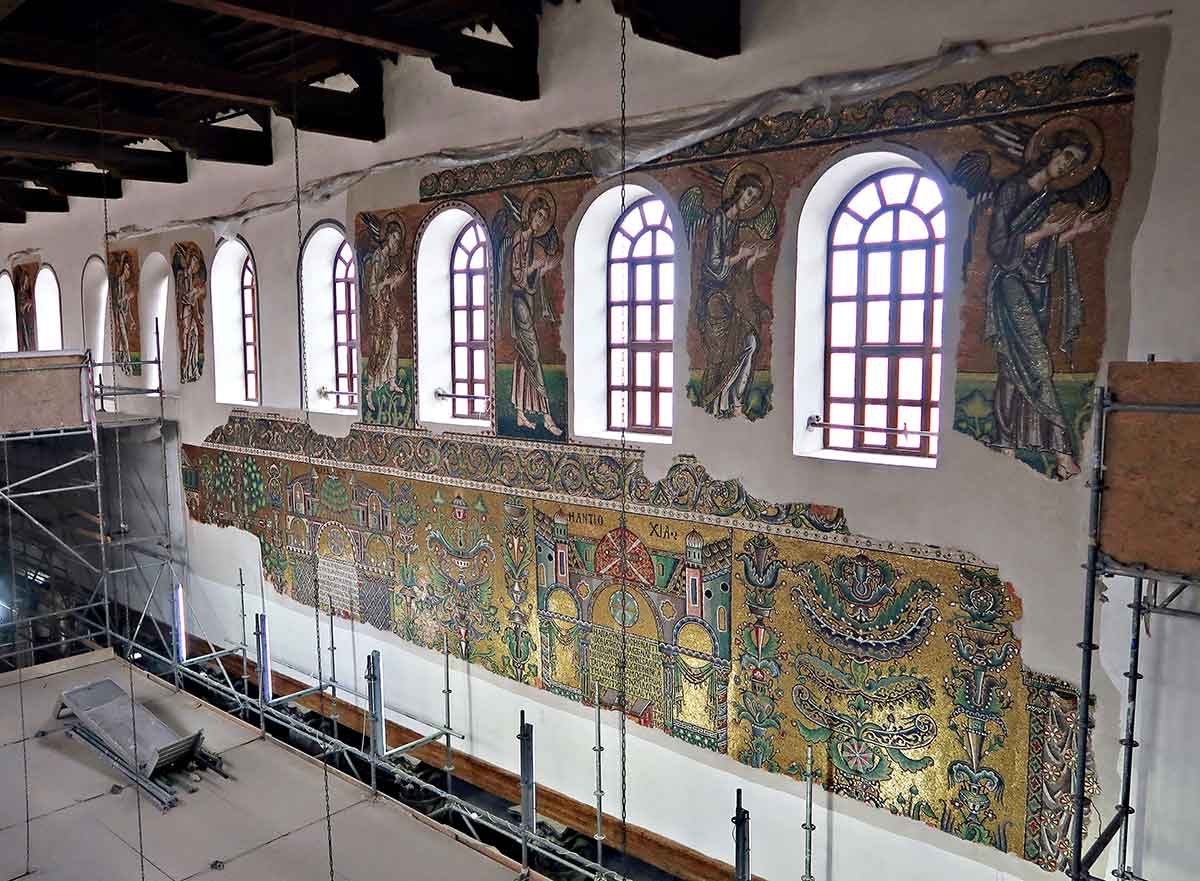 Newly-restored 12th-century mosaics high up in the church of the Nativity. The angels between the windows point to the grotto of Jesus’ birth.

The columns in the nave are still covered up, but one that was restored has been exposed since October last year. The artwork on it had faded to the point that it was difficult to notice. Time will tell how much more artwork will be revealed on the other 49 columns when the coverings eventually come off.

And much more work is planned, if funding can be secured. And there is no guarantee of that. Even now, the renovation team must down tools periodically while they wait for new funds to come through.

In the future, they would like to restore the 4th-century floor mosaics in the nave, and the floor above them. The plans are in place: all now depends on financing them.

The renovations have produced some sensational finds.

While renovating the wooden door of the narthex (the lobby between the church’s entrance and the nave), the restorers made an astonishing discovery: hidden behind old wooden boards was the original upper part of the door. Now visitors can see the door in its original form.

But most exciting is the restoration of the Crusader-era mosaics up on the walls of the church. On our visit in February, we had the very special privilege of being invited up on the scaffolds by chief engineer Ibrahim Abed Rabbo, a Palestinian Catholic.

Ibrahim explained the extraordinary process of all the renovations in the church but took particular pride in the beautifully restored mosaics from 1155 which had been made near-invisible by the accumulation of centuries of soot and dirt, rain-damage from the leaky roof, and, in one instance, having been covered by plaster.

Restoring them was painstaking work, of course, but it also required difficult decisions, Ibrahim told us. For example, every bit of damage sustained over the centuries, every missing stone, would be subject to deliberation over whether to leave things as they were or whether to execute cosmetic repairs to preserve the integrity of the image. 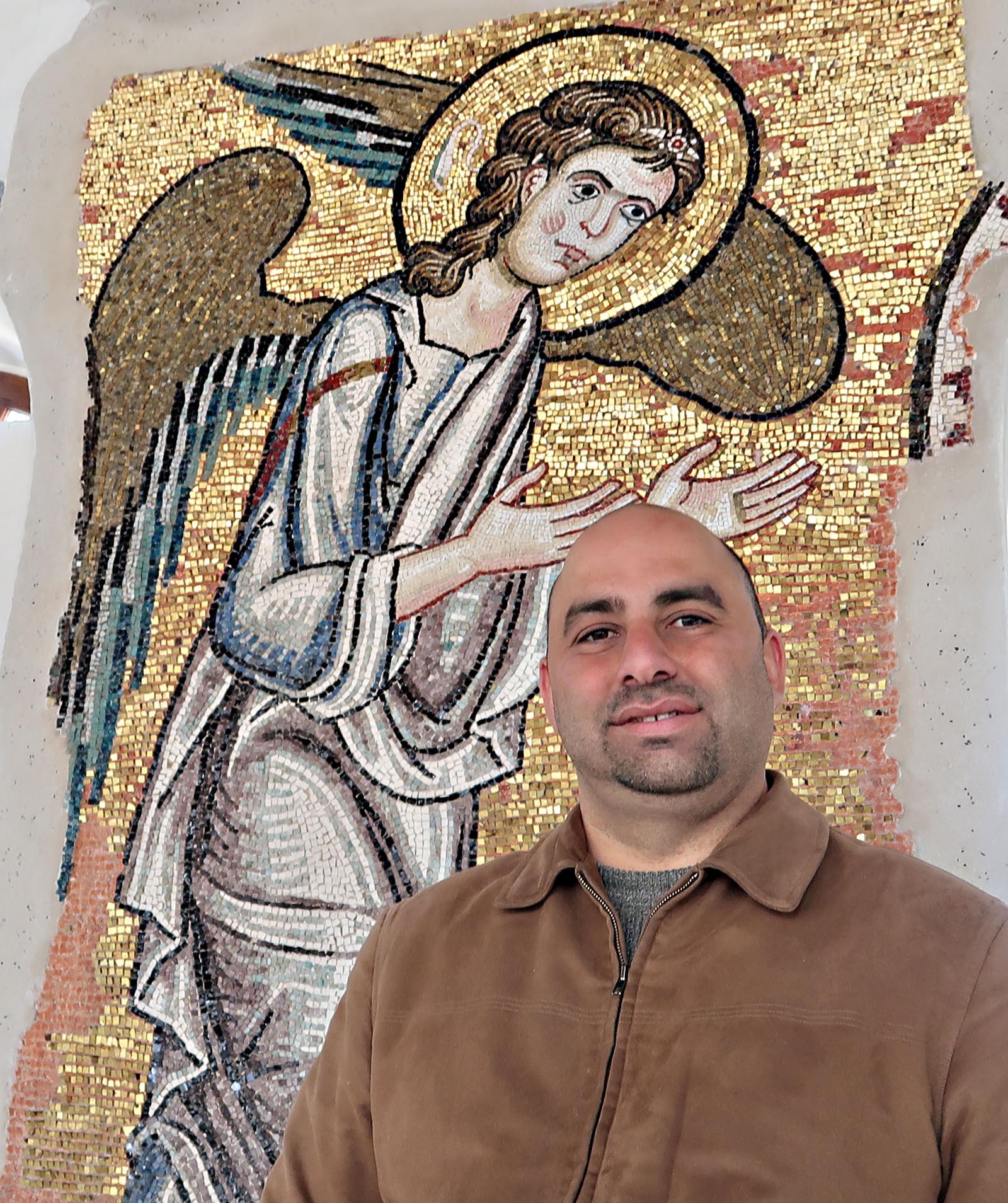 Chief engineer Ibrahim Abed Rabbo with a newly-recovered 12th-century mosaic in Bethlehem’s church of the Nativity.

For the most part, Ibrahim explained, this was a process of conservation, which means that there would be a minimum of intervention on the artworks. During this, the Italian restorers inspected and restored more than 1,5 million tiny mosaic pieces.

Only about 20% of the mosaics that once covered the walls have survived. Most stones were lost through rain-damage, some possibly through theft.

The artistry of the mosaics is astounding. For example, the original artists would layer gold-leafed mosaic pieces at precise geometric angles so that light would reflect off them into the church.

The most exciting mosaic discovery surely is that of a radiant angel — its stones include mother of pearl and gold and silver leaf pressed under glass — which for centuries had been hidden under plaster. It might have been covered to protect it from the elements, or perhaps from iconoclastic Ottomans who had a way of shooting depictions of people and animals in the face, as they did with other angels here.

Painstakingly the restorers removed the plaster so that the angel could “join” the other six angels that point the viewer to the grotto of the Nativity, the traditional birthplace of Jesus.

The other angels had their noses shot off, an act which the shooters believed would kill the angels.

The restorers took the decision to repair their faces, “so that they may have a second life”, Ibrahim said.

Unusually, we know the identity of the artist who created these angels mosaics, for he signed one of them: Basilius. Another grand mosaic, of St Thomas inspecting Jesus’ wounds, is also signed by Basilius, along with Ephraim. 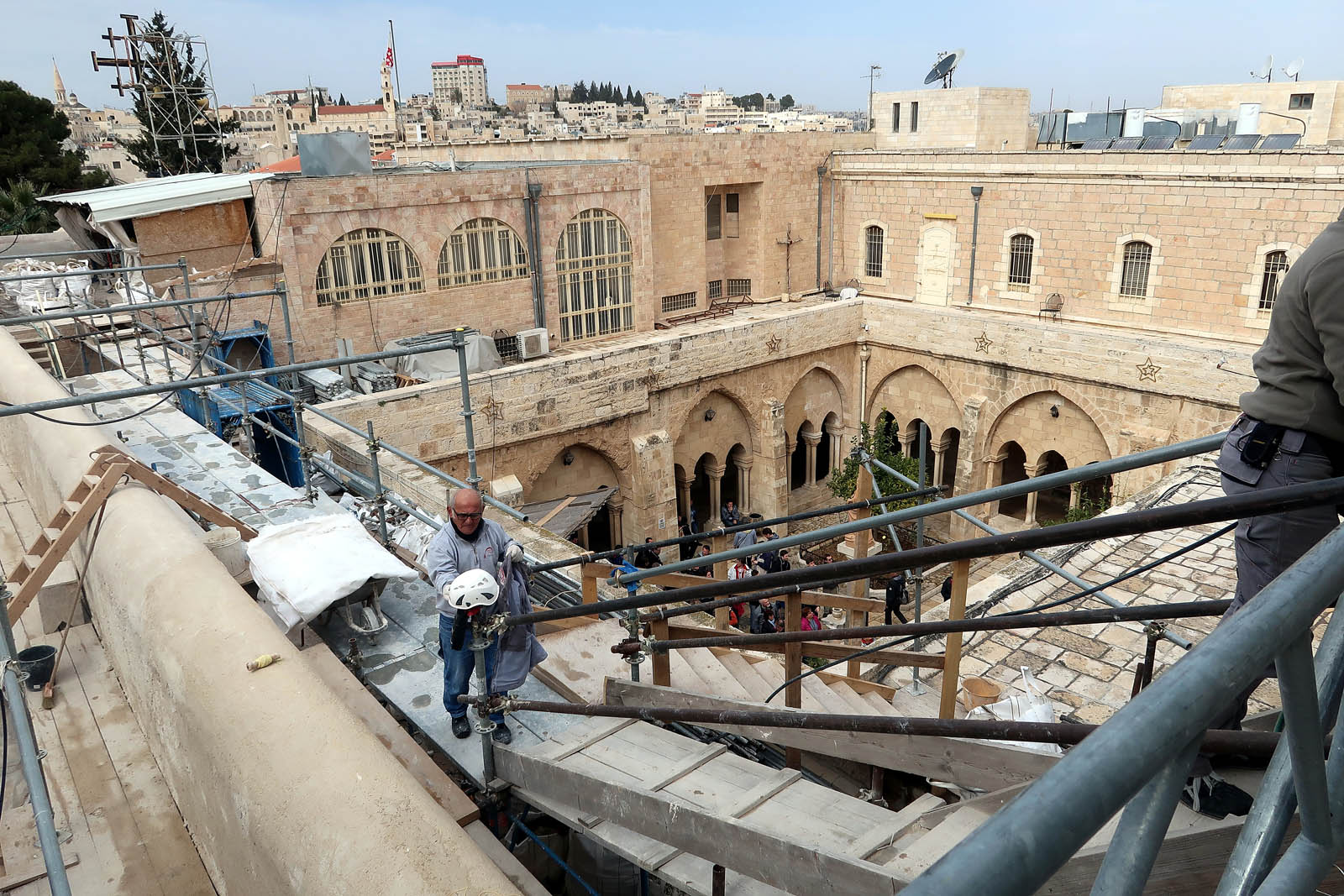 Renovations on the roof of Bethlehem’s Church of the Nativity in February 2017. (Photo: Günther Simmermacher)

The last time the church was renovated was in 1479, so very few people, if any, will have seen these mosaics close-up in the intervening half-millennium. In a few months the scaffolds will come down, and it will be another few hundred years before anyone will see them close-up.

Next time I come to the church of the Nativity, I will have to look up to see these mosaics. But I will remember the blessed privilege that allowed me to see these astonishing works of art right before me, their surviving parts looking much as Basilius and Ephraim left them 862 years ago.

All project contracts and disbursements are audited by Deloitte & Touche

Previous articles in the series: To Stand Where Jesus Once Stood and The Faith of Palestine’s Christians