To Stand Where Jesus Once Stood 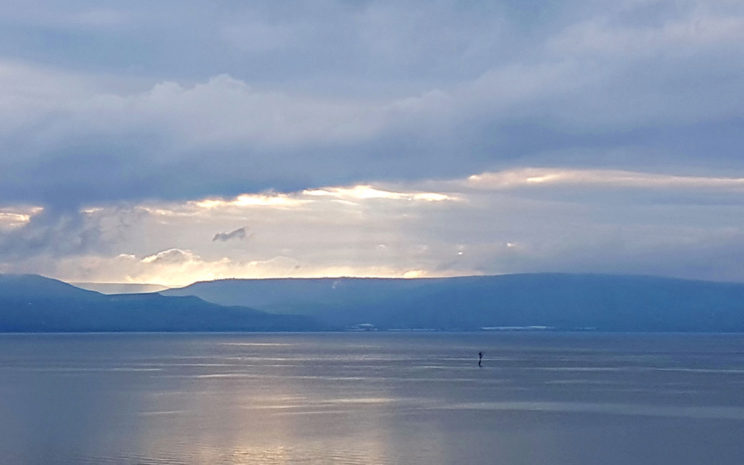 The Sea of Galilee glistens in the morning. This might have been the view the Risen Lord had as he made the fish breakfast for the disciples. (Photo: Günther Simmermacher)

Last month Günther Simmermacher made a private visit to the Holy Land. In the second of a series of four articles, he visits the Sea of Galilee

Why, my friend Rimon demanded to know, do we celebrate bears on Valentine’s Day? Bears are dangerous, not cuddly. Why don’t we rather have Valentine’s donkeys? Those animals are cute, useful and harmless, he pointed out.

Then Rimon, a Catholic Palestinian tour guide, produced a photo of a donkey decked out in Valentine’s Day red which was making the rounds on Facebook.

With a couple of days to go to Valentine’s Day, I teased my beautiful wife that I’d get her a Valentine’s donkey.

On Valentine’s Day we stayed at the Pilgerhaus, a Benedictine-run guesthouse right on the shores of the Sea of Galilee at Tabgha. As we walked on the grounds before breakfast that morning, we were — I’m not making this up — serenaded by four donkeys on the slope behind the Pilgerhaus. And having performed their choral Song of Eeyore, the four donkeys trotted off, in single file.

Serendipity or God having fun with us? Either way, my promise of the Valentine’s Donkey was kept, the lack of red dress compensated for by the quantity of them. 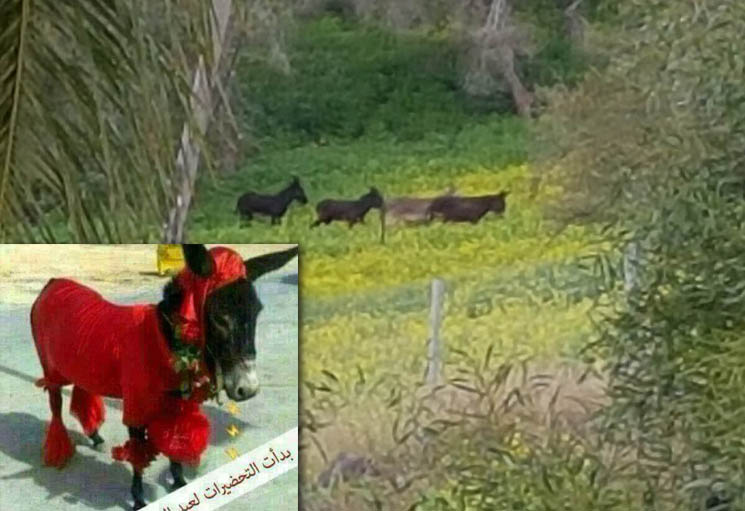 The singing donkeys march of in single file. Inset: Social media image of the Valentine’s Donkey.

The Pilgerhaus is one of the Holy Land’s oldest surviving Catholic guesthouses, having first opened in 1889. And none has a location as perfect as this place.

There are other well-situated Catholic inns in Galilee. In Tiberias, the Casa Nova is right in the harbour on the Sea of Galilee. Several places in Nazareth are near the church of the Annunciation. And the Franciscan Sisters’ guesthouse on the Mount of Beatitudes has a beautiful pastoral setting. But at the Pilgerhaus, you are right in the heart of the theatre of Jesus’ Galilean ministry.

The comfortable inn is located directly on the shore of the Sea of Galilee. Various little spots have been created to invite prayerful reflection and meditation by these famous waters. And if you want to take a dip in the lake, in imitation St Peter, you are welcome to do so.

Two sites within a few hundred metres of the Pilgerhaus record key events in the Gospel: the miracle of feeding of the multitude, and the fish braai which the risen Christ prepared for the disciples before entrusting what would become the Church to St Peter.

Capernaum, Jesus’ headquarters in Galilee, is about 3km by road; less by foot on the path directly from the Pilgerhaus.

More than anywhere else, at the Sea of Galilee one can be immersed in the Gospel. What on the page is abstract becomes real here. The writer Fr James Martin SJ pinpointed this well in his marvellous book Jesus: A Pilgrimage.

On a private pilgrimage he came to a place called the Bay of Parables, very near to the Pilgerhaus. Here, tradition holds, Jesus would preach from a boat to his audience on the shore. As Fr Martin stood at this place, the parable of The Sower came to his mind.

“All around us was this: rocky ground, fertile ground, stony ground, and even a huge thorn bush,” he writes.

“It grounded the Gospels, and Jesus, in a way that I never could have imagined.  It made me think more about the way Jesus drew on nature in his parables.” 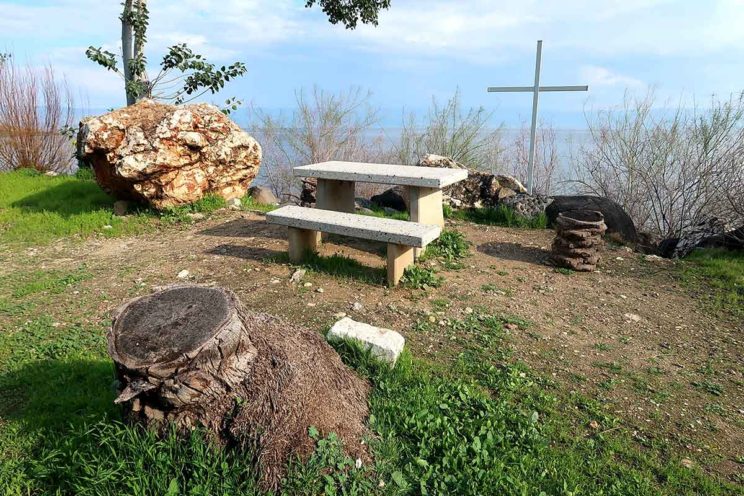 Meditation spot on the shore of the Sea of Galilee at the Pilgerhaus. (Photo: Günther Simmermacher)

At the Sea of Galilee one sees what Jesus saw. One stands where Jesus stood — and if it is not that exact spot then it’s one just like it very nearby.

One can imagine the Lord walking here, surveying the majesty of the Golan Heights and seeing what tomorrow’s weather might bring, looking at the lake to determine whether it will be still or in need of admonition to stop raging.

As one contemplates the proximity to the actual man Jesus, Scripture ceases to be abstract. Jesus becomes tangible. What a gift that is to a Catholic soul!

The Pilgerhaus — literally, “pilgrims’ house” — is one of the more comfortable Catholic guesthouses, and it is run with teutonic precision. But more than the comfort, the focus is on the spiritual side of things. Most rooms have no TV because you don’t come here to watch CNN.

There is a chapel, and on the shore of the lake, there’s a simple Mass site where a basalt boulder serves as the altar and tree logs as the pews.

On the other hand, there is also a cafeteria/bar, with outdoor seating overlooking the Sea of Galilee. This can be a place for some end-of-day fun — which surely Jesus and his disciples made time for, too — or for reflection with a glass of red wine as one watches darkness descend on the lake. The full moon will throw its light on the waters, creating an iridescent effect that inevitably arouses thoughts of the divine. 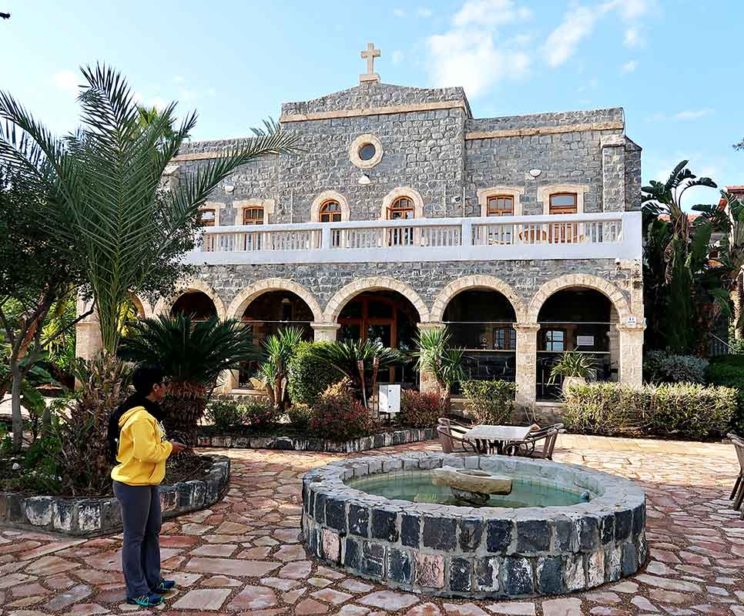 Cafeteria and garden of the Pilgerhaus in Tabgha.

I noticed small groups of pilgrims and volunteers using the bar facility to discuss their faith, perhaps with a little wine or Taybeh beer helping them to loosen inhibitions to speak about things that otherwise may be too personal and difficult to articulate.

On our first evening, we attended vespers in the adjacent church of the Multiplication, joining another visiting couple and a small group of German Benedictines who live in the monastery behind the church. It was very beautiful, very prayerful.

We had missed a special event by only a day: a Mass to mark the reopening of the church’s atrium, 20 months after it was severely damaged in an arson attack by Jewish terrorists (as even Israel’s Prime Minister Binyamin Netanyahu, usually no great friend of Christians, called them).

Cardinal Rainer Woelki of Cologne, president of the German Association of the Holy Land, presided at the Mass which was also attended by Israeli President Reuven Rivlin.

I doubt anybody asked the president why the Israeli government gave less towards the renovations than initially negotiated — the bulk of the funds came from donations.

Now the church, built in 1982 according to the architecture of the 5th-century basilica on that spot, is as it was before that dreadful night in June 2015. Even the little fish pond in the atrium has been repopulated. 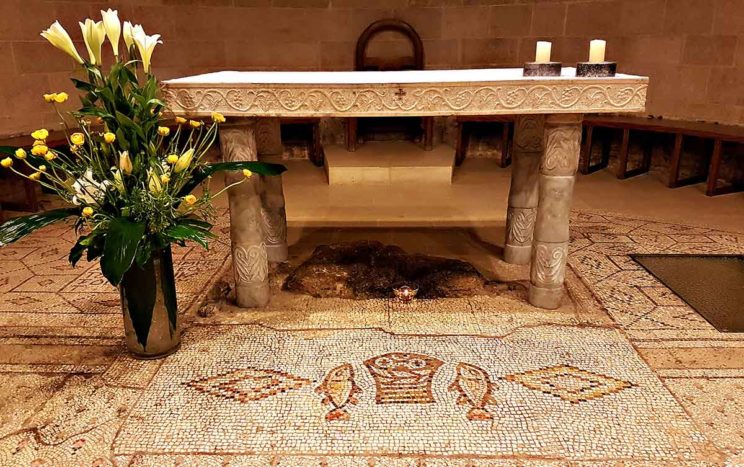 The altar of the church of the Multiplication in Tabgha, below which is the rock which has been venerated since at least the 5th century as that on which Jesus performed the miracle of the Loaves and Fishes, and the famous mosaic of the miracle from that original church. (Photo: Günther Simmermacher)

As a keen photographer I was delighted to be able to get up close to the usually cordoned-off altar with the 5th-century mosaic of the multiplication in front of it, and below it the rock on which Jesus is reputed to have performed the miracle.

The famous mosaic is reproduced on many souvenirs, but I wonder how many people who see these reproductions notice an odd thing about it: there are the two fish but only four loaves of bread. Could those Byzantines not count?

The answer is profound: the mosaic is below the altar, and the fifth loaf is (nominally) on the altar — in the form of the Eucharist.

Not so stupid after all, those Byzantines.

The Southern Cross’ pilgrimage to the Holy Land and Italy with Archbishop William Slattery is booked to stay in the Pilgerhaus in August. See www.fowlertours.co.za/slattery for more information.