The Faith of Palestine’s Christians 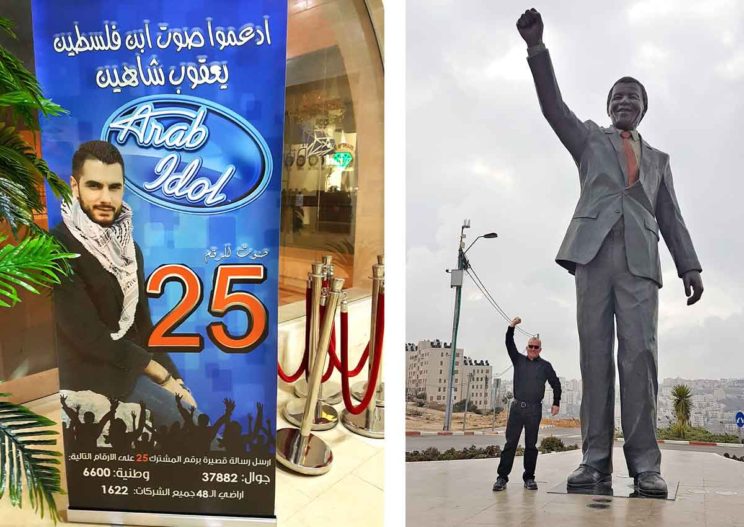 (Left) A banner advertising Arab Idol contestant Yacoub Shaheen, a Christian from Bethlehem. (Right) Günther Simmermacher with the statue of Nelson Mandela in Ramallah, a gift to the Palestinian capital from the City of Johannesburg.

Last month Günther Simmermacher made a private visit to the Holy Land. In the first of a series of articles, he looks at the Christians of Palestine.

After a long wait in the queue, we finally reached the checkpoint, manned by Israeli soldiers. Addressing us in Hebrew, they demanded to know where we are from. Our driver, my friend Rimon Makhlouf, replied: “South Africa”.

“South Africa?” The soldier repeated in what sounded like an aggressively mocking tone. South Africans coming from Ramallah, capital of Palestine… I could see a problem.

More Hebrew. Rimon said, “Cape Town”, and the soldier became even more agitated. Had a baboon once stolen his sandwich at Cape Point?

He called somebody from the back. A captain, perhaps, to interrogate what exactly these South Africans had been up to in Ramallah? No. A widely grinning youngster in uniform appeared, not a scary man from Mossad. He asked if we knew Constantia. We did. Encouraged, he asked whether we knew the Hershovitz family. Alas, we don’t, though that is doubtless our loss.

And with that we were waved through, to continue our journey on Palestinian roads.

Earlier we had visited the excellent but poorly publicised Yassir Arafat Museum, in which rooms of the Palestinian leader’s compound are perfectly preserved.

There Rimon, a Roman Catholic and the leading Christian tour guide in the Holy Land, returned to the boardroom where a decade and a half ago he had served as a translator for President Arafat and a delegation of four US Congressmen, at a time when Israeli forces were besieging the compound. It was a moving experience for my friend.

In Ramallah we also visited the six-metre-high statue of Nelson Mandela which was donated to the Palestine capital by the City of Johannesburg in April 2016.

Unlike our leader of the opposition—who claims to have met with unnamed Palestinian officials while in Israel to gladhand with the Israeli prime minister—we took many photos of Madiba, who was a passionate supporter of Palestinian rights and an advocate for peace in this troubled region.

Before the statue could be installed last April, it was held by Israeli customs for 30 days, with Israel demanding a duty ten-times that of its actual cost (in the end, it was not paid).

“Nelson Mandela, who had already spent 28 years in the jails of the apartheid regime in South Africa, was again detained for 30 days by the Israeli authorities,” Ramallah mayor Mussa Hadid quipped at the time.

Ramallah (“Heights of God”) once was a mainly Christian city, and the followers of Christ still have a prominent presence in the population of 27000.

In Palestine the presence of Christians is inescapable, despite the community’s dwindling number.

Near Ramallah is the village of Taybeh, the last in the region to be populated entirely by Christians. In Taybeh there is a brewery, named after the village, which produces outstanding beers.

Another fine beer, Shepherds, is brewed in nearby Birzeit (a name just one E away from spelling out the German word for “beer time”, but its name actually means “Well of Oil”), another traditionally Christian town and home to a famous university.

Palestinian Christians are often identified by the crosses they wear. Most of their cars have a rosary or other Christian article hanging from their rear-view mirrors.

In Christian bars or restaurants, crosses hang on the walls or other devotional items are on display. Our accommodation in Bethlehem, the elegant Diamond Hotel, features a reproduction of the Last Supper above its entrance. The image of the Maronite saint Charbel Makhlouf is ubiquitous.

In short, Palestinian Christians are not shy to identify themselves as such.

This is a community that sticks together, across the denominations. If you want to see Christian unity in action, go to Palestine. 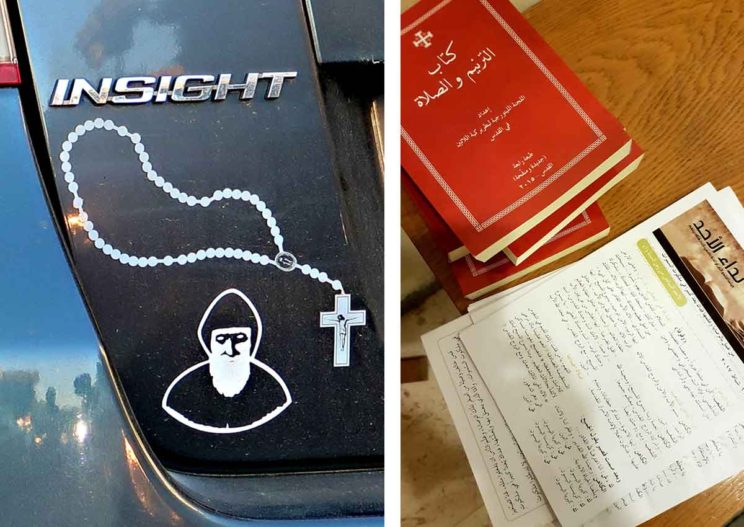 (Left) A car in Jerusalem with a sticker showing the rosary and an image of St Charbel Makhlouf. (Right) A hymn book and parish newsletter in Arabic at Mass in the Tantour Ecumenical Centre in southern Jerusalem. In Palestinian parishes in all of the Holy Land, the liturgy is typically in Arabic.

While we were in Bethlehem, banners everywhere urged people to vote for a local contestant in Arab Idol, the enormously popular singing talent show broadcast from Beirut which covers the whole Arab-speaking region.

The contestant, a strikingly handsome young man named Yacoub Shaheen, is an Assyrian Orthodox Christian and a deacon in his church, which conducts its liturgy in a dialect of Aramaic, the language Jesus spoke.

Just over a week after we left, the grand finale was broadcast on a big screen in a packed Manger Square, scenes from which were transmitted on the programme. When the winner was announced, the square erupted: Yacoub Shaheen!

Yacoub’s success was as important to the people of Bethlehem, a city suffering from the effects of Israel’s suffocating ghetto wall, as that of the 2013 winner, Mohammed Assaf, was to Gaza (google Assaf’s story; it is quite remarkable).

After winning Arab Idol, Yacoub donated a chunk of his prize money to a Christian charity, as he had done earlier after winning a singing contest.

It is hugely important to Palestinian Christians, a community which feels its marginalisation, that one of their own won the contest.

When the general discourse presents the Israel-Palestine conflict as one of religion—of Jews versus Muslims—it excludes the Palestinian Christians from the equation, as if they don’t exist.

But they do exist, and one need not look hard to see that. To illustrate, in Ramallah we sought out a café for a bite to eat. It looked clean and well-frequented, so we entered. They served alcohol: a Christian bistro.

Later, in the Israeli port city of Haifa, we entered a random bar in the city’s main artery, which leads from the Baha’i Temple to the harbour. After a while my eyes fell on a small banner hanging on a wall, depicting a key.

The key is a symbol of the Palestinian demand for the Right to Return (to the homes taken from them when Israel took over their land in 1948). This was a Palestinian-owned establishment, and since it served alcohol, obviously owned by Christians.

The Catholic Church provides great care for the Palestinian Christians, and Palestinians generally.  In Bethlehem, the university and many schools are Catholic. Social housing is provided by Caritas.

When a pregnant mother and her unborn child died at an Israeli checkpoint after being denied passage to a Jerusalem hospital, the Church responded by building a maternity and paediatric hospital in Bethlehem.

As it is in many places in the Middle East, in the Holy Land the Catholic Church’s presence is visible and important through its schools, hospitals and charities.

When we are asked to give at the collection during Good Friday services, the proceeds help to support these schools and other projects run by the Church, as well as helping to maintain the many sacred sites in the Holy Land. St Paul said: “It is a blessing to assist the faithful of Jerusalem,” meaning the Holy Land (2 Cor 8:3-4).

In Palestinian cities many streets bear Christian names. In Nazareth, the main street is named after Pope Paul VI. Bethlehem also has a main artery named after the late pope. Its main road is Manger Street; the main piazza, dominated by a mosque, is called Manger Square (alternatively Nativity Square); our hotel in Bethlehem was on St Antonio Street, formerly Caritas Street.

And Bethlehem’s mayor, Vera Baboun, is a Catholic, as were four of her predecessors.

Of course, others have explicitly Christian names. My friend Rimon (from Raymond) has three adult children, named George, Christine and Gabriel.

The number of Christian Palestinians is declining due to emigration, mostly owing to the lack of freedom and opportunity in a land controlled by Israel. Some never come back, but many others do.

In Taybeh, the Khoury family ran successful businesses in the US but returned to found the local brewery, winery and a smart hotel.

The co-owner and general manager of our hotel in Bethlehem returned after more than 30 years from Australia to be home again.

And one day, when there will be peace, human rights and opportunity, others will follow. This we must pray for.

Oh, and if you know the Hershovitz family of Constantia, tell them that a cheerful  Israeli soldier wishes to send them his regards.

Next in the series: At the Sea of Galilee

The Sites of Holy Week in Jerusalem

How the Crusaders Changed the World

Where is the Real Place of the Tranfiguration?
Share