A Timely Call for Renewal 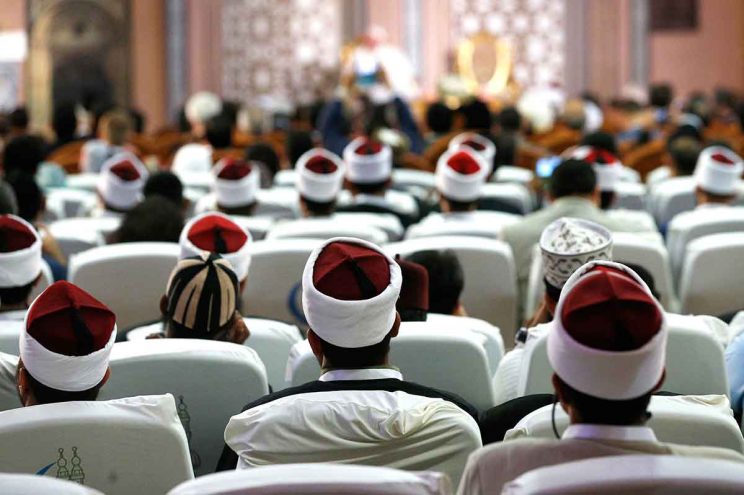 People attend a conference on international peace attended by Pope Francis in Cairo April 28. The pope was making a two-day visit to Egypt. (CNS photo/Paul Haring)

This weekend, Pope Francis is visiting Fatima for the centennial celebrations of Our Lady’s apparition to the three shepherd children, and the canonisation of Jacinta and Francisco.

It will be a time of looking back and looking forward — back on a hundred years of prayer for the world and forward to the needs of our world today, especially peace, justice, respect, and the protection of all life.

Over the last four months in this space we have travelled to every continent and have united our prayers to our suffering brothers and sisters. It is fitting to end this journey of prayer and solidarity in the Middle East where the People of God have walked for millennia and which today is as plagued by conflict and power struggles as it was in the time of the Old and New testaments.

The scriptures of the three Abrahamic faiths are filled with the names of places that are today the theatre of conflict — as scenes of violence or neighbours affected by war — in Palestine, Israel, Syria, Lebanon, Jordan, Iraq and Egypt.

God gave Moses the Ten Commandments on Mount Sinai in Egypt, the same region where the Coptic Christians are being currently targeted by ISIS. In this place, God called his people to honour and glorify his name and to protect life. Instead, today brother kills brother, justifying the violence by saying that it is to protect God’s name and laws.

St Paul had his life-changing conversion experience on the road to Damascus, the capital of modern Syria and the focus of most international news since the civil war broke out in 2011—one so merciless that it has even seen the deployment of chemical weapons on civilians.

The conflict has created the world’s greatest refugee crisis since the end of the Second World War. Some 4,8 million Syrians have fled the country since 2011 and 11 million people who are still in Syria are in desperate need of humanitarian assistance.

At the same time, European countries and the US claim that they can no longer absorb the financial cost of the constant flow of refugees, and in some cases have lost the political will to help the victims of state-sponsored and extremist violence.

For the Israelites fleeing Pharaoh’s slavery in Egypt, Canaan was a land of “milk and honey”, promising the Hebrew people a homeland after 40 years of wandering in the desert.

In the aftermath of World War II, the international community helped to create the modern state of Israel, allowing the millions who were displaced by Hitler’s madness to start afresh.

But this came at the cost of Palestinian sovereignty and had a direct impact on the people who had lived there for centuries, even millennia.

Feeling itself under threat in a region that is dominated by Islam, the Israeli government continues to strangle the Palestinian nation which has been pushed to the margins; most of Palestinians now live under occupation in the West Bank, where Israel has been building settlements that are illegal in international law.

Many feel that the only way to resolve this political crisis, which has dragged on since the late 1960s, is to adopt a two-state solution. Except it’s not that easy.

It is unlikely that Israel will agree to having an independent Palestinian nation state at its borders. And Palestinians will not accept the fragmented shape such a state would take, nor give up on what they call the right to return to the land and homes they lost in 1948.

We’re unlikely to see a solution to this war of brothers, especially for as long as international political interests continue to prosper from this conflict.

These conflicts can be a call for us to see human events through the eyes of faith and overcome our cynicism and preconceived ideas about the Middle East.

Pope Francis calls us rather to see the potential of this region, with its ancient and religious history.

On his recent visit to Egypt, the Holy Father reiterated a message he has proclaimed many times before: that “our world needs people who can build bridges of peace, dialogue, fraternity, justice and humanity”.

For too long, religion has been used to justify the conflicts in the Middle East, but Francis reminds us that the “brutal violence” is caused by “sheer desire for power, the arms trade, grave social problems and that religious extremism which uses the Holy Name of God to carry out unprecedented atrocities and injustices”.

As we prepare our hearts for the Fatima celebrations, let us join our hearts to Pope Francis’ prayer for “peace, love, and mercy” that peacemakers may have the courage to help find “solutions to pressing and complex problems that need to be faced now in order to avoid the spread of worse violence”.

As Catholics, we are also called to inform ourselves, responsibly and without prejudice, about these and other conflicts in the world, so that we can “unmask the peddlers of illusions” and those who “preach hatred in order to rob the simple of their present life and their right to live with dignity.”

It is not just the duty of political leaders, but of each one of us to “dismantle deadly ideas and extremist ideologies [including our own Christian extremism] and to believe responsibly…that God is the God of freedom”.

It is also a call to live out the ideals of God’s kingdom in our midst by building bridges of peace, love and mercy in our own lives, thereby serving as examples for others.

Catch up with previous articles by Sarah-Leah Pimentel