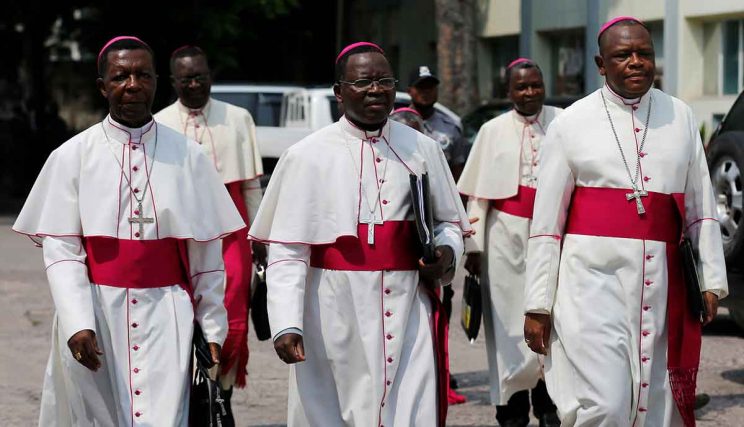 More than 3,300 people have been killed in Congo’s Kasai region in fighting between the army and rebels since October, Catholic leaders said.

The church’s findings were released in a United Nations statement June 20. Church sources also said that 20 villages had been destroyed, half of them by government troops.

In all, 3,383 people died in clashes in the region. The number contrasts with U.N. reports that have put the number of dead at about 400. The U.N. has also said more than 20 mass graves have been discovered.

The army’s spokesperson could not be reached for comment.

The office of the papal nuncio in Kinshasa sent a note to the Vatican’s Fides news agency saying that Bishop Felicien Mwanama Galumbulula of Luiza and Bishop Pierre-Celestin Tshitoko Mamba of Luebo were forced to flee the violence. The message said 60 parishes, 34 religious houses and 141 schools were closed or damaged because of the fighting, and 31 Catholic health facilities were also affected. Five seminaries also were forced to close.

The violence was triggered by the death of a local leader at the hands of police in Kasai in August. Supporters of the leader soon began attacking soldiers and police in the region.

Atrocities have been reported to being carried out by the security forces and a government-backed militia, known as the Bana Mura, which was established to help fight a rival group, the BBC reported.

The conflict has forced more than 1 million to flee the region. Aid workers have said the humanitarian response had been inadequate.

Local authorities have denied the U.N. access to information about the violence in the region. The U.N. has said it has collected evidence that hundreds of villagers from the Luba and Lulua ethnic groups have been killed.

On March 12, two U.N. workers were kidnapped by suspected rebels and their bodies were discovered in shallow graves days later.

The U.N. Human Rights Council was set to vote June 22 on whether to authorise an investigation into the violence. Congolese authorities have said they would reject any inquiry.

“Carrying out an investigation that excludes the Congolese authorities would be unacceptable. It would be as if we were not an independent country,” Justice Minister Alexis Mwamba told reporters in Geneva.

U.N. human rights chief Zeid Al-Hussein called on the Council to mandate an investigation after Congo missed a deadline to agree to the probe.

“That would be a pity, for the simple reason that if a resolution is voted for and doesn’t take us into account, implementing it will be difficult,” Mwamba said.