A Clear Conscience – Learning from the Saints… 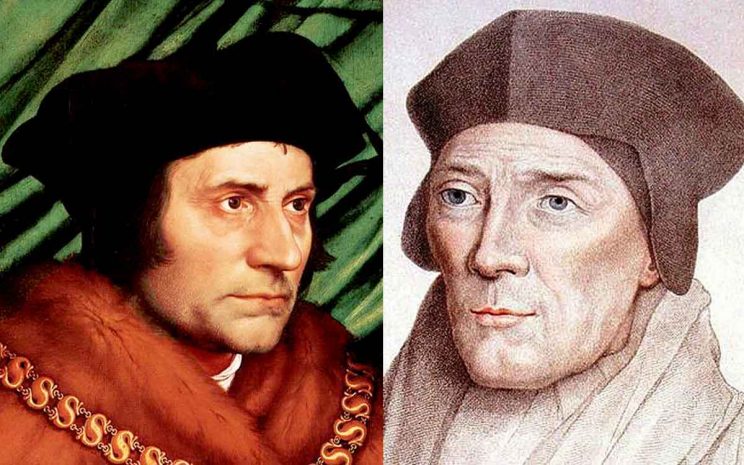 Guest Editorial by Michael Shackleton – Let’s consider the martyrdom of two saints who stood firm in the 16th century against the king of England, Henry VIII, who had divorced his lawful wife, Catherine of Aragon, and married Anne Boleyn, a lady of the royal court.

We celebrate the common feast day of these resolute men on June 22, a good reminder of the role that conscience plays in the moral life of each one of us.

Ss John Fisher and Thomas More in all good conscience could not agree to the divorce on the grounds of the indissolubility of a sacramental marriage. Moreover, they repudiated any thought of the king being head of the Church in England, as he had boldly declared himself.

They were in a small minority. Thomas More, a layman and lord chancellor of England, and John Fisher, bishop of Rochester, represented perhaps the cream of the laity and clergy respectively. On the whole, ordinary people and clerics sailed on regardless in obedience to the royal command.

Bishop Fisher, as a member of the House of Lords, the upper house of parliament, openly objected to what the king was doing, warning that his actions could destroy the Church.

Thomas More was more circumspect. He kept his counsel and said little, enabling him to sidestep any trap the king’s officers set for him. He was eventually convicted of treason because of false evidence and perjury.

With his new powers and prestige, Henry took full charge of the Church. He appointed clerics and nobles eager to ingratiate themselves with their regal patron and to ensure that his actions were approved and implemented.

In 1534 he pressed parliament to pass the Act of Supremacy, a gesture of defiance to the pope and the Church of Rome. It declared that the king and his successors would be the only supreme head on earth of the Church of England.

It was not long before the Oath of Supremacy was demanded of people of all ranks. Those who refused to take it were persecuted, our two martyr saints among them.

This brief look back into history confronts us now as we find that South African politicians in the House of Assembly have been wrestling with the question of whether they may cast their votes according to their consciences or according to the pressure put on them by their party.

Ss Thomas More and John Fisher sacrificed their comforts and security before they sacrificed their lives. Men of law and learning, they were punitively deprived of books and intellectual stimulus. Their days and nights of imprisonment were severe.

Their consciences were clear, however. Hard and harrowing as it was, they courageously chose to suffer for the sake of what they knew was the right thing to do, even though they were in a small minority of non-conformists.

The right thing to do is not something everyone agrees on. Some consciences are clear, informed and demanding, while others may be vague, uninformed and lax. Making moral judgments is a task that can contradict what others may deem the right or wrong thing to do.

The Catechism of the Catholic Church tells us that man has in his heart a law inscribed by God. His conscience is his “most secret core and his sanctuary. There he is alone with God whose voice echoes in his depths (1776)”.

For those in public office, conscience must be informed by the common good of all involved and not by personal or self-serving aims. It is in the nature of humanity to contradict this but in spite of human failing and fear we have to hold to the primacy of good conscience.

Good conscience can be buried and ignored under the pressures of the conventions of the time. But conscience nags, and sooner or later it confronts one and must be faced honestly.

Ss Thomas More and John Fisher are historical figures and saints honoured for their loyalty to and love of Christ in his Church. They may be distant in the past but their feast day could be a good reason for us to think again on the importance of a clear conscience in public and private life.

In hopes of getting my lads to read it, I recently started re-reading "1984," the classic novel by George Orwell...