When You Pray, Have Your GPS Handy

The Southern Cross’ recent pilgrimage to Portugal and Spain was a very prayerful experience. GÜNTHER SIMMERMACHER looks at the power of prayer on pilgrimage. 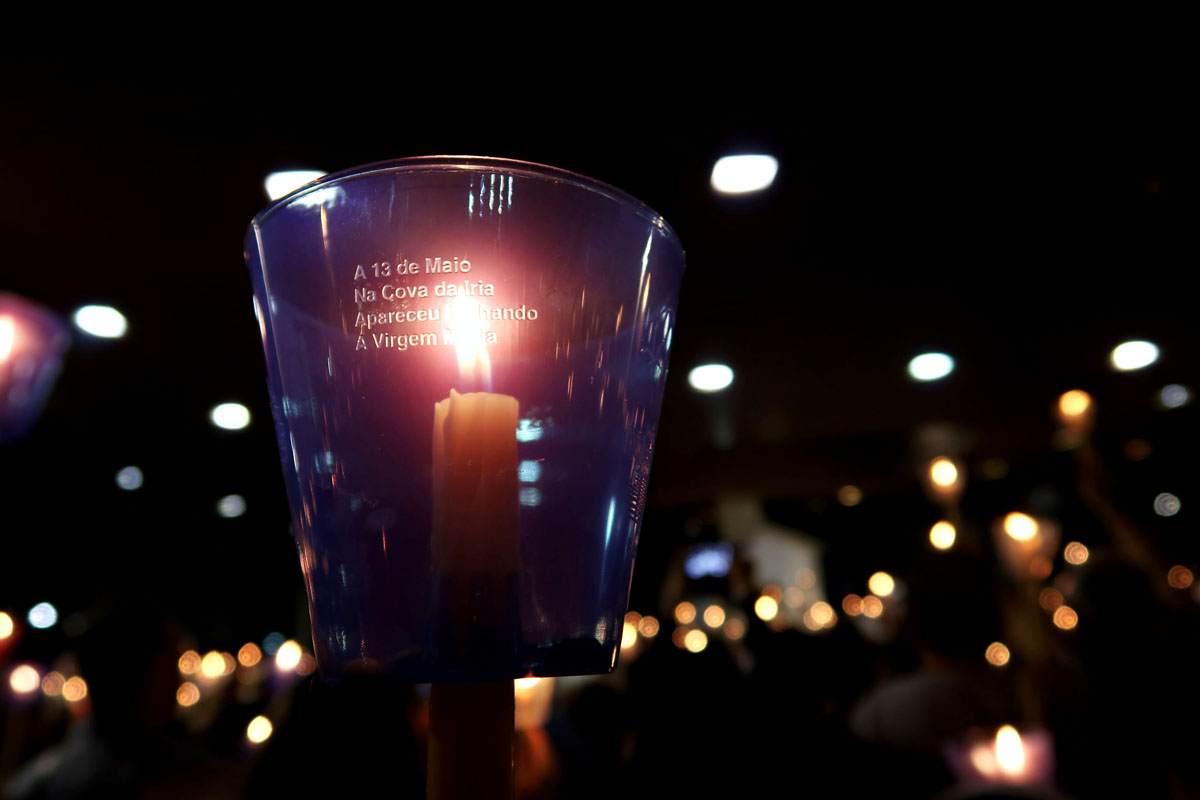 A candle burns during the nightly prayer of the rosary at the chapel of the Apparition in Fatima. (All photos: Günther Simmermacher)

On our pilgrimage, the drought in the Cape was very much on our minds, and therefore also part of our prayers. So at Mass in the chapel of the Angel of Peace in Fatima, our spiritual director, Archbishop Stephen Brislin, placed the need for rain among our prayer intentions.

Next morning it poured with rain. But not in the Cape. In Fatima. Then it stopped, and started again on our way to Coimbra. It seems that we had neglected to include the GPS coordinates for exactly where we wanted the rain to fall.

In Coimbra we tried again at Mass in the Franciscan church of Santa Justa. Again we neglected to give coordinates. After a hot and sunny day in that historic city, it rained as we crossed the border from Portugal to Spain. It was the last rain we had on our journey. Pleasingly, it fell just as we passed a flat landscape of fields, proving that the rain in Spain does indeed fall mainly on the plain.

Our prayers for rain were eventually answered in the right place. Soon after our return it rained a lot, accompanied in Cape Town by heavy storms. Had we prayed a little too hard? 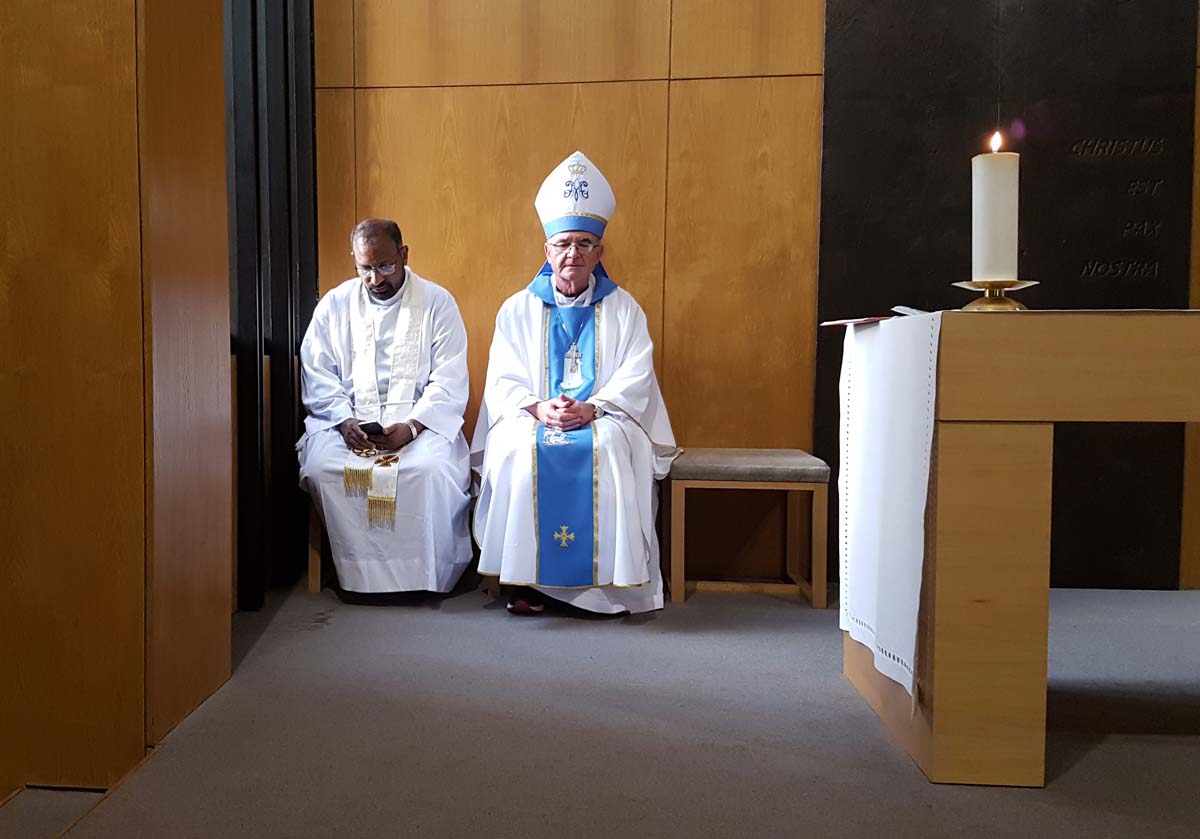 I have been on many pilgrimages. The surprising thing is — and I trust I’m not tempting fate in saying this — that I have had remarkably few instances of rain on any of them. Last year it rained on the final day of a winter pilgrimage to the Holy Land. And even then, it did so only after we had concluded our programme — within minutes of doing so. Inconveniently, we were still in the church of the Visitation at Ein Kerem, which is on a hill one has to ascend and descend on foot. But before that, the rain had stayed away for the entire duration of our programme.

Maybe that was luck, or maybe God blessed our group with good weather. On another occasion I think I might have been an agent in an entirely unexpected change of weather.

It was the Saints of Italy pilgrimage in September 2015, led by Fr Emil Blaser OP. I had studied the weather forecasts which promised sunshine throughout our journey, except for one day: that planned for Venice — a place one really doesn’t want to visit when it rains.

On the morning of that day, it was indeed raining heavily in nearby Padua where we stayed. Before we left I asked our tour director, who comes from the region, whether there was a chance the rain would clear. Her answer: “Take your rainjackets and umbrellas; if it rains here in the morning, it will rain all day. That never changes.” I got more than I had any right to hope for. Not only did the rain stop, but the clouds disappeared and we had a glorious day of sunshine, giving us an opportunity to see Venice as it should be seen. It was inexplicable.

It still rained heavily on the way to Venice. It rained while we were having Mass in San Marco basilica. When we emerged from the basilica, the famous piazza before it was flooded. What a dismal prospect!

Ask and ye shall receive

That morning, in my room in Padua, I prayed for St Scholastica, patron saint of rain-related matters, to intercede on our behalf. Since we had visited her birthplace in Norcia (now destroyed by an earthquake) a few days earlier, I was hopeful that St Scholastica might look kindly upon my request.

I got more than I had any right to hope for. Not only did the rain stop, but the clouds disappeared and we had a glorious day of sunshine, giving us an opportunity to see Venice as it should be seen. It was inexplicable.

A couple of days later it was raining as we arrived in Milan. My fellow pilgrims asked me to invoke St Scholastica again, but I didn’t want to overplay my prayerful hands. “You do it,” I told them. Presumably they did: within minutes the rain stopped.

St Scholastica’s association with rain goes back to an episode in her life where she asked for rain, to prevent her brother, St Benedict, from leaving on a rare and brief visit. And the rains came, thereby prolonging what turned out to be the last time they were together. So when we pray for rain in the drought-stricken areas of our country, we may invoke St Scholastica’s intercession for our intention — but just be clear where exactly you want it to rain.

Rain was a metaphor which St Teresa of Avila often used to describe how grace is like a shower upon souls which lose themselves completely in God. 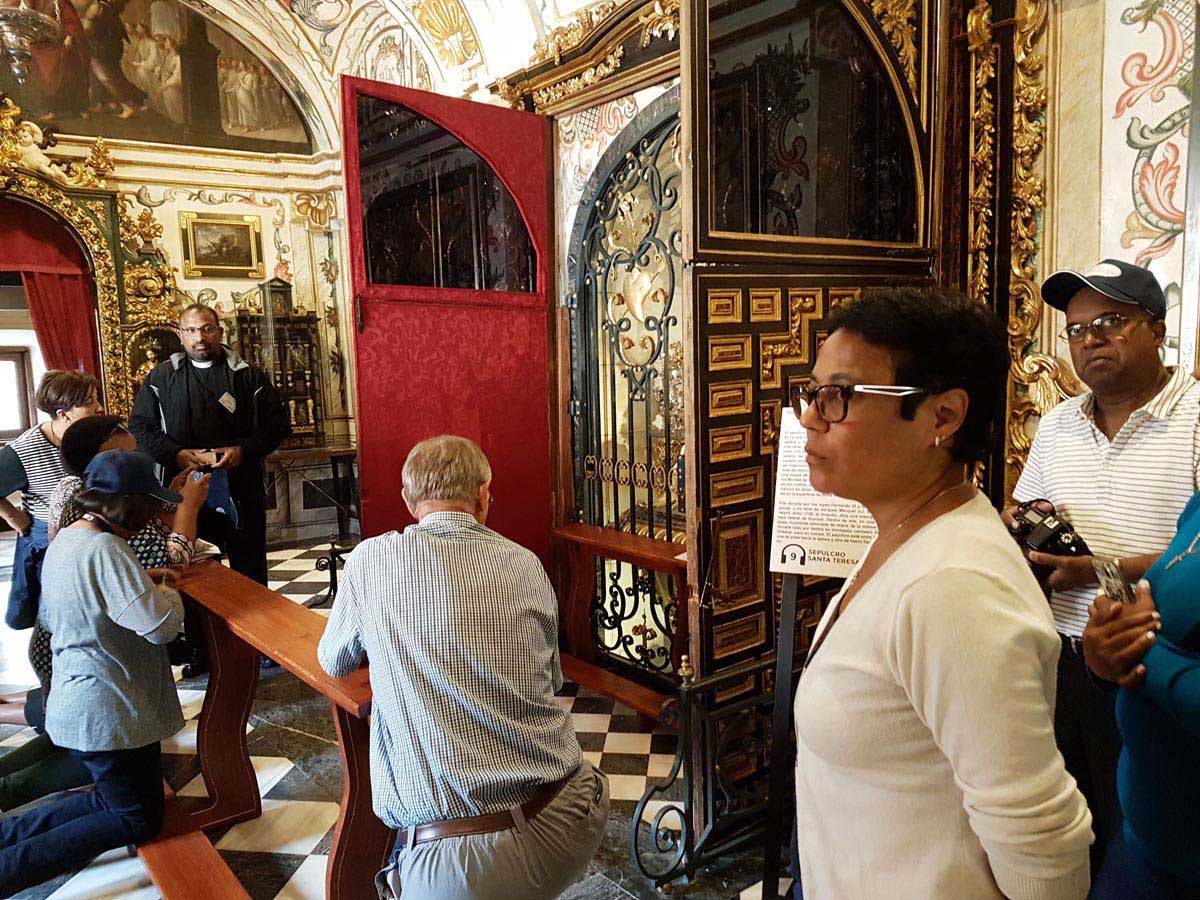 Pilgrims pray at the tomb of St Teresa of Avila in Alba de Tormes.

St Teresa was, of course, the second major destination of our journey, after Our Lady of Fatima. Like many popular saints, St Teresa has a large portfolio of patronages. These range from illnesses and headaches to lacemaking and chess.

One patronage has to do with her ecstasies and the spiritual knowledge she derived from them. Today these are regarded as a spiritual treasure, but in her day Teresa was regarded by many as being possessed of diabolical knowledge. Her claim of having apparitions of Jesus earned her more ridicule. And so St Teresa is also the patron saint for those who are ridiculed for their faith. In Fatima we prayed also that those who are derided for being Christians may have the faith and strength to rise above that and continue to be witnesses of Christ. I cannot reconcile that theology with my personal conception of our loving God, but I am not qualified to challenge it.

In Fatima we prayed also that those who are derided for being Christians may have the faith and strength to rise above that and continue to be witnesses of Christ.

St Teresa was also a practitioner of a spirituality that self-inflicts various types of mortifications of the flesh, as a means of penance that imitates the suffering of Christ.

One can observe a form of self-mortification at Fatima today. Indeed, it is encouraged in the sanctuary where devout people walk on their knees on a specially paved path that goes around the chapel of the Apparitions.

I must confess that this is not my kind of spirituality. I cannot conceive of God inviting self-mortification as a method of securing his favour. Of course, there are graces in suffering, and there’s a whole theology behind it. I cannot reconcile that theology with my personal conception of our loving God, but I am not qualified to challenge it. 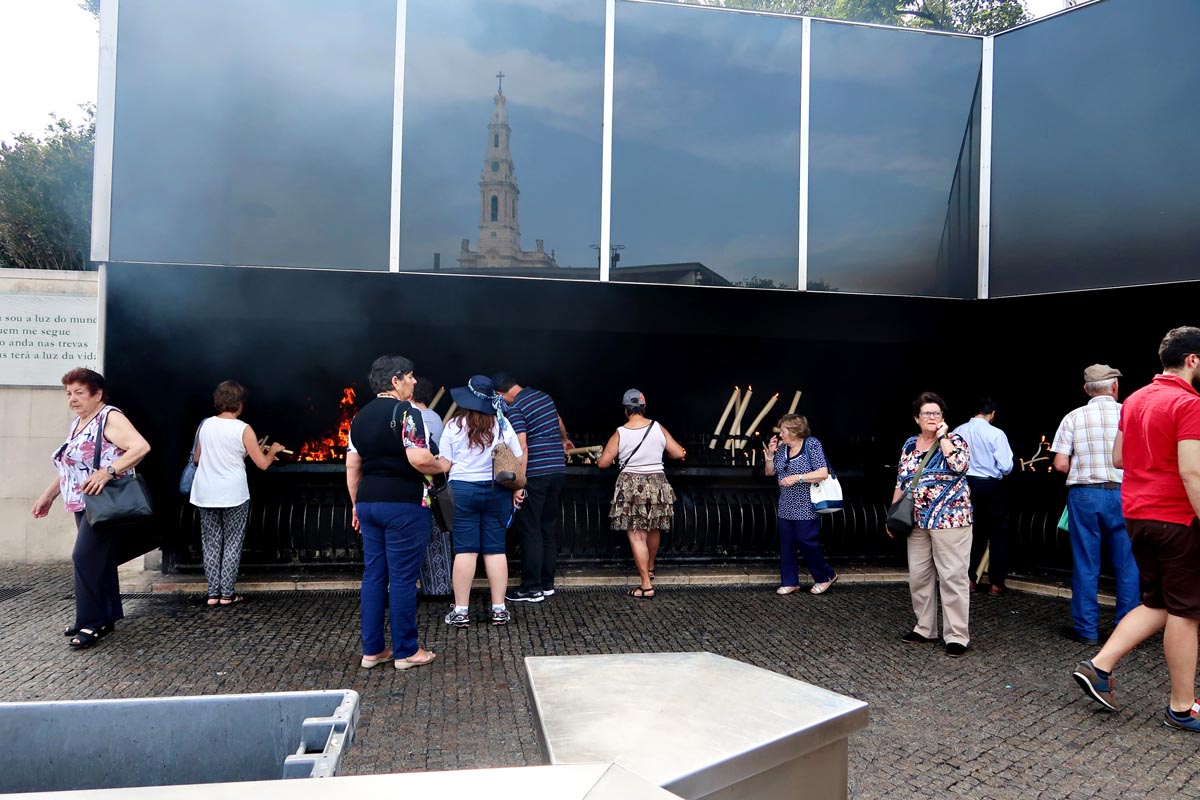 The faithful burn their votive candles in prayer in the Fatima sanctuary. Some candles come in the shape of body parts to represent particular prayer intentions relating to health. Other pilgrims walk on their knees in prayer. Reflected on the screen is the basilica of the Holy Rosary.

Indeed, I found the sight of people walking on their knees a touching sign of profound faith (provided it is not done as an external exhibition of exaggerated piety). As we prayed the rosary by candlelight at the Apparition chapel, I noticed a family — mother, father, young son — walking on their knees. The physical pain of that exercise was written in their faces, but also an intense serenity. No doubt, for that family, this excruciating way of prayer was the best format for their specific intention. And if you opt for this method of prayer, the story behind your intention may well be one of heartbreak and desperation. May it turn out to be one of joy and relief. Prayer is not only essential to a pilgrimage, but a pilgrimage is prayer itself.

The Southern Cross in association with Radio Veritas will repeat this pilgrimage in October, to be led by Fr Brian Mhlanga OP. For details see www.fowlertours.co.za/fatima