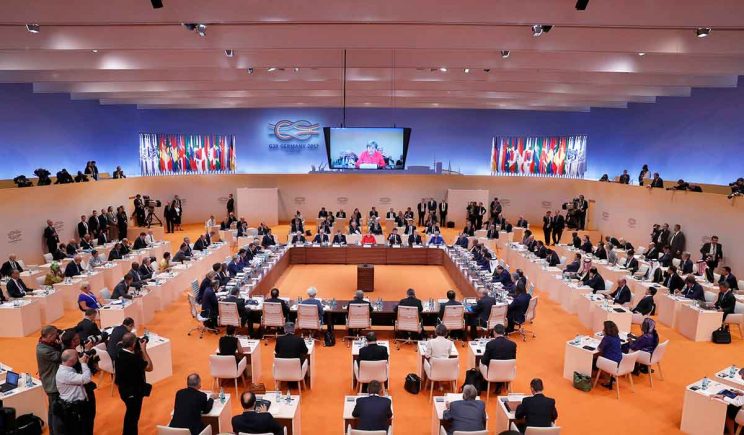 German Chancellor Angela Merkel speaks at the plenary session of the the Group of 20 meeting in Hamburg, Germany, July, 7. In a message sent to world leaders attending the meeting, Pope Francis said they must reflect on the repercussions their decisions may have on the entire global community, not just their own countries.(CNS photo/Felipe Tueba, EPA)

World leaders attending the Group of 20 meeting in Hamburg, Germany, must reflect on the repercussions their decisions may have on the entire global community and not just their own countries, Pope Francis said.

While it is reasonable that the G-20 is limited to a “small number of countries that represent 90 percent of the production of wealth and services worldwide,” a multilateral approach in solving economic problems must be made “for the benefit of all,” the pope said.

The pope’s message was to German Chancellor Angela Merkel, host of the July 7-8 leaders’ summit.

“Those states and individuals whose voice is weakest on the world political scene are precisely the ones who suffer most from the harmful effects of economic crises for which they bear little or no responsibility,” the papal message said.

“This great majority, which in economic terms counts for only 10 percent of the whole, is the portion of humanity that has the greatest potential to contribute to the progress of everyone,” he said.

Citing his apostolic exhortation “Evangelii Gaudium” (“The Joy of the Gospel”), Pope Francis proposed four principles “for the building of fraternal, just and peaceful societies.”

Reflecting on the principle that “time is greater than space,” the pope said the migration crisis, which is “inseparable from the issue of poverty and exacerbated by armed conflict,” requires an effective solution spread over time with a clear “final objective.”

“In the minds and hearts of government leaders, and at every phase of the enactment of political measures, there is a need to give absolute priority to the poor, refugees, the suffering, evacuees and the excluded, without distinction of nation, race, religion or culture, and to reject armed conflicts,” he said.

He also urged world leaders to promote economic policies where “unity prevails over conflict.” Economic differences, he said, cannot be resolved if leaders are not committed to “substantially reducing levels of conflict, halting the present arms race and renouncing direct or indirect involvement in conflicts.”

“There is a tragic contradiction and inconsistency in the apparent unity expressed in common forums on economic or social issues, and the acceptance, active or passive, of armed conflicts,” the pope said.

G-20 leaders, he continued, must follow the example of past world leaders who were guided by “the primacy of the human being” and turn away from “new ideologies of absolute market autonomy and financial speculation.”

“In their tragic wake, these bring exclusion, waste and even death,” the pope said.

Pope Francis said to resolve today’s economic problems and challenges, the G-20 leaders must first “consider the eventual repercussions on all countries and their citizens, while respecting the views and opinions of the latter.”

He also expressed his hope that the meeting would be led by “the spirit of responsible solidarity that guides all those taking part.”

“I ask God’s blessings upon the Hamburg meeting and on every effort of the international community to shape a new era of development that is innovative, interconnected, sustainable, environmentally respectful and inclusive of all peoples and all individuals,” the pope said. By Junno Arocho Esteves Catholic News Service