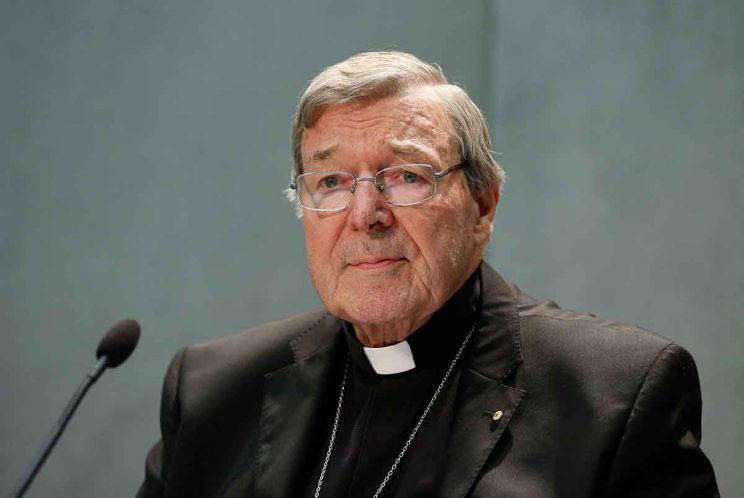 Australian Cardinal George Pell delivers a statement in the Vatican press office. Speaking after Australian authorities filed sexual abuse charges against him, the cardinal denied all charges and told reporters he looks forward to having an opportunity to defend himself in court. (CNS photo/Paul Haring)

In responding to the disgrace of sexual abuse of minors by Church personnel and their cover-up in many dioceses throughout the world, the Catholic Church has done much to repair the loss of confidence the scandals have caused.

Most bishops’ conferences have adopted rigorous protocols governing the handling of allegations of abuse, and Pope Francis has removed some bishops who failed to deal appropriately with such allegations.

Pope Francis has also instituted the Pontifical Commission for the Protection of Minors.

But there also continue to be failures and even deliberate efforts to undermine anti-abuse efforts.

When Marie Collins, an abuse survivor of unimpeachable integrity and generosity of spirit, resigned from the Commission for the Protection of Minors earlier this year, she cited as one reason the obstructionism she perceived in the Congregation for the Doctrine of the Faith — a charge the pope subsequently described, with diplomatic understatement, as “a little bit right”.

Pope Francis has been clear about his views on abuse and the mishandling of abuse allegations.

Cardinal Pell must be commended for doing the right thing in willingly subjecting himself to the justice where others have sought, and were given, exile in the Vatican to evade it.

So the news that Cardinal George Pell, head of the Vatican’s Secretariat for the Economy and a member of the pope’s nine-member advisory group of cardinals, will this month face multiple charges relating to sexual abuse in an Australian court has placed Pope Francis in a delicate position.

In 2014 he moved Cardinal Pell from the archdiocese of Sydney to the Vatican at a time when the cardinal was embattled over his handling of past abuse cases. Should the latest charges against Cardinal Pell have merit, which the prelate has denied in the strongest terms, then this will reflect directly also on Pope Francis.

Cardinal Pell must be commended for doing the right thing in willingly subjecting himself to the justice where others have sought, and were given, exile in the Vatican to evade it.

However, that the cardinal has been granted a “leave of absence” to defend the charges against him is a soft response to a critical situation.

The norm, though not universally applied, is that when a priest is credibly accused of having committed acts of sexual abuse, he is removed from active ministry until the law and Church processes have taken their course.

For priests who have been unjustly accused, this has been a very difficult and unfair situation. But in the context of the Church’s history, it is a necessary policy.

According to the police deputy commissioner of Victoria state, Cardinal Pell “is facing multiple charges in respect of historical sexual offences and there are multiple complainants relating to those charges”. Clearly, the allegations against the cardinal are deemed credible, and now they must be tested in court.

Cardinal Pell is entitled to protest strongly against the charges levelled against him — he has called the investigation a “relentless character assassination” — and he must be considered innocent unless found to be otherwise by the court.

The presumption of innocence applies to all priests who are facing allegations, even when they are removed from active ministry; a procedural step that does not in itself imply guilt.

But the question must be asked: Why was that norm not applied to Cardinal Pell? Why is the cardinal on a “leave of absence”, requested on his own initiative to clear his name, when other priests in similar predicaments do not have such a choice? Why was the cardinal not automatically suspended from ministry?

The optics are not good, from different angles (and should the cardinal be convicted, they would be devastating).

For those who are following the Church’s response to the abuse crisis with a critical eye, there will be a not entirely unjustified perception that Pope Francis is selective about applying the strict rules he himself has endorsed.

For priests, and for the laity, the generous terms by which Cardinal Pell may take a leave of absence can appear to be a double standard that has no place in today’s Church: the notion that priests of rank should be subject to different treatment than those of no rank.

When prominent clerics are accused of crimes, the Church must be seen to be acting with decisive integrity. In the case of Cardinal Pell, we must interrogate whether it actually did so.