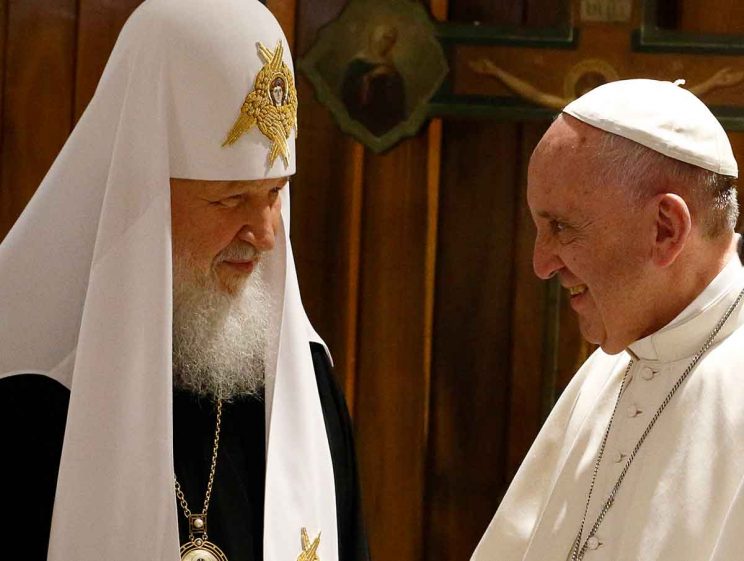 Cardinal Pietro Parolin, the secretary of state, visited Moscow and met with the patriarch and Russian President Vladimir Putin, as well as with leaders of Russia’s Catholic community.

Although he said planning a papal trip to Russia was not on the agenda, the Vatican secretary of state said his visit to Moscow was designed to build on the meeting Pope Francis and Russian Orthodox Patriarch Kirill had in Cuba in 2016.

The list of topics for the meetings ranged from ecumenical dialogue and interreligious cooperation to current world affairs and climate change, he said in a series of interviews before leaving Rome.

Cardinal Parolin and Putin spent about an hour together at the president’s residence in the Black Sea resort of Sochi, according to the Vatican press office. The meeting included “an exchange of views on various themes, both international and relating to bilateral relations.”

Opening the meeting, Putin told the cardinal, “I am very pleased to see that the dialogue continues between our churches,” and he expressed his pleasure that Cardinal Parolin had met Patriarch Kirill.

“There is no doubt that the common humanitarian values that the Holy See and the Russian Orthodox Church defend form the foundation for relations between the two churches and between Russia as a state and the Vatican,” Putin said in his remarks.

Cardinal Parolin told Putin, “I see a new dynamic that has emerged over the recent months and years in relations between the two churches. I hope that all participants in this process will continue working in this direction in order to expand our cooperation and bring us even closer together.”

Cardinal Parolin said his meetings with government officials were designed to share “Pope Francis’ interest in bilateral relations between the Holy See and the Russian Federation as well as his concerns in the sphere of international affairs.”

“Obviously,” the cardinal said, “the meeting offered an occasion to discuss some concrete questions regarding the life of the Catholic Church in the Russian Federation, including the difficulties that remain in obtaining work permits for non-Russian religious personnel and the restitution of some churches, which are needed for the pastoral care of Catholics in the country.” Many church buildings were confiscated by the former Soviet government and never returned.

Regarding international affairs, Cardinal Parolin said he and Lavrov discussed several ongoing conflicts, including the war in Eastern Ukraine and the war in Syria.

In situations of war, he said, the Catholic Church often is directly involved in promoting humanitarian aid for the victims, but it also works on a diplomatic level to promote a negotiated peace with guarantees of “justice, legality, truth” and the safety of civilians.

The Russian foreign ministry posted online the first minutes of the working meeting between Cardinal Parolin and Lavrov.

The foreign minister told the cardinal, “We see that our positions are close on a number of current issues, including the peaceful settlement of crises, fighting terrorism and extremism, promoting the dialogue among religions and civilisations and strengthening social justice and the role of the family.”

And, he said, it is important that the strengthening of Vatican-Russian relations is “complemented by the dialogue between religions, which was launched during the historical meeting between Patriarch Kirill and Pope Francis in Cuba.”

Cardinal Parolin began his visit to Russia with a meeting with Metropolitan Hilarion of Volokolamsk, head of external relations for the Russian Orthodox Church.

After the meeting, he told reporters their time together was very constructive, and that even though there are “thorny issues,” there also is a great desire to overcome them. As an example of an ongoing difficulty, Cardinal Parolin said the existence of the Ukrainian Catholic Church “remains for the Russian Orthodox Church an obstacle.”

In the evening Cardinal Parolin presided over a Mass for Moscow’s Catholics in the Cathedral of the Immaculate Conception. Before Mass, he had met with the country’s Catholic bishops. By Cindy Wooden Catholic News Service