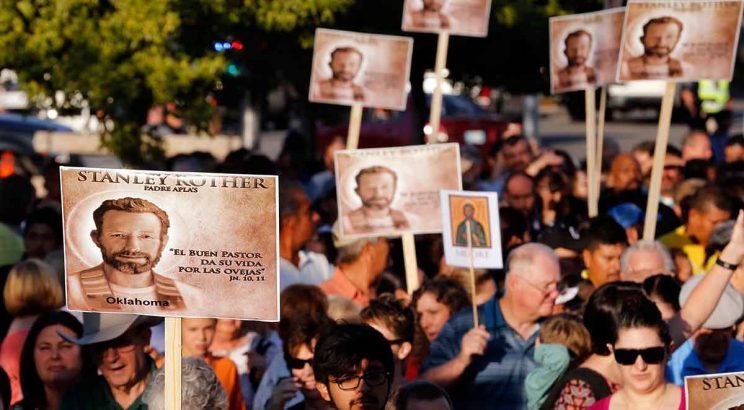 People hold placards with an image of Blessed Stanley Rother ahead of his beatification Mass outside Oklahoma City’s Cox Convention Center. Blessed Rother, a priest of the Oklahoma City Archdiocese, was murdered in 1981 in the Guatemalan village where he ministered. (CNS photo/Steve Sisney, Archdiocese of Oklahoma City)

Wearing a red and black traditional Guatemalan shirt that had belonged to martyred U.S. priest Father Stanley Rother, Ronald Arteaga traveled from his village of Santiago Atitlan to witness the  beatification of the pastor he knew as “Padre Aplas.”

Even though Arteaga was only 10 when now-Blessed Rother was martyred in 1981, he remembers “he was always with the people of Santiago Atitlan, Guatemala, and more than that, he identified with our indigenous population.”

The sleeves on Arteaga’s shirt had to be rolled up because, as he recalled, Blessed Rother was a tall man.

“He learned to speak Tz’utujil, the language of my people, and he always served the people most in need,” Arteaga said. Bl Rother translated the Bible into the local language – the government at the time considered teaching the Tz’utujil to read a threat

When Blessed Rother was killed, Arteaga recalled, it “broke the hearts of the entire village,” but “we had hope that he would receive this honor and thanks be to God that this day has arrived!” 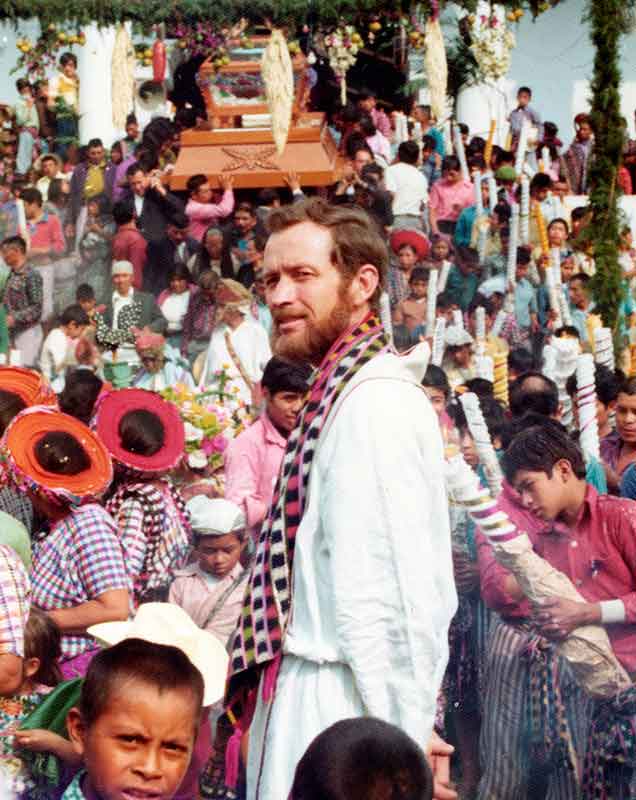 Father Stanley Rother, a priest of the Oklahoma City Archdiocese who was brutally murdered in 1981 in the Guatemalan village where he ministered to the poor, is pictured in an undated photo. (Photo:CNS)

An estimated 20,000 packed the Cox Convention Center from across the country and throughout the world to witness the beatification of the native Oklahoman who would become the first U.S.-born martyr. Ordained for the Archdiocese of Oklahoma City in 1963, Blessed Rother went to the archdiocesan mission in Santiago Atitlan. He was gunned down in his rectory by three masked men in 1981.

READ  Feast of Our Lady Help of Christians in the Street!

Pope Francis recognized the priest’s martyrdom last December, making him the first martyr born in the United States and clearing the way for his beatification.

“We’re amazed at the size of the crowd and delighted so many people are interested in celebrating his life,” said Archbishop Paul Coakley of Oklahoma City during a media availability. “He’s a local hero whose reputation goes far beyond Oklahoma.”

Cardinal Angelo Amato, prefect of the Congregation for Saints’ Causes said in his homily at the beatification ceremony:

The 13 years Blessed Rother spent as a missionary in Guatemala “will always be remembered as the glorious epic of a martyr of Christ, an authentic lighted torch of hope for the church and the world,” the cardinal said in his homily during the U.S. priest’s beatification Mass. “Formed in the school of the Gospel, he saw even his enemies as fellow human beings. He did not hate, but loved. He did not destroy, but built up,” “This is the invitation that Blessed Stanley Francis Rother extends to us today. To be like him as witnesses and missionaries of the Gospel. Society needs these sowers of goodness,” he said. “Thank you, Father Rother! Bless us from heaven!” By Tony Gutierrez, CNS