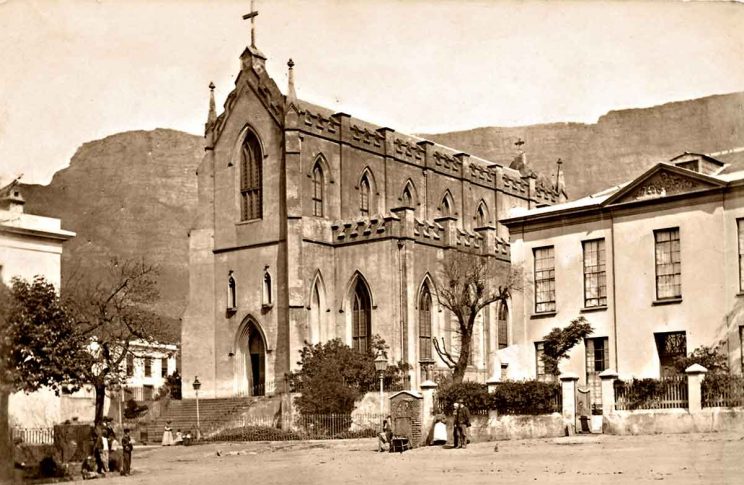 The Catholic Chuch in South Africa has a rich history of suppression and opposition in South Africa – so from the first Mass said around  1487 till today when we are celebrating the 200th anniversary of the South African Catholic Church – we also celebrate the lives of those who built the faith in SA.

The Cape Town archdiocese has begun a new Ecclesia series titled “Of The Lord’s Vineyard: 200 Years Of The Church In Southern Africa”.

I am particularly fascinated with the foundation history of our country. I also believe now is an opportune time to deal honestly with the unhealthy silences within our history that encourage the festering of resentment.

Strictly speaking, Catholicism is part of Southern Africa’s foundations. It begins with the arrival on December 8, 1487 — the feast of the Immaculate Conception— of Bartholomew Diaz at Walvis Bay, which he appropriately called the gulf of Santa Maria da Conceição.

The first Mass on our soil was probably celebrated around late December of 1487 or early January 1488, on the island of the Holy Cross (named as such by Diaz), just off Port Elizabeth.

Ten years later, Vasco da Gama, on his way to India, sighted on Christmas Day the land on the east coast of what is now South Africa, to which he gave the name Tierra de Natal.

Those explorers also brought missionaries with them, but the priests did not concentrate on evangelising South Africa. Most of the priests on these ships were explorers, gathering scientific and geographical knowledge—and they were treated with virulent anti-Catholic sentiments of the era. They were often treated as underdogs and sometimes part of the indentured servants of the ships.

Between 1652 and 1795, under Dutch East India Company rule, Catholicism was forbidden in South Africa. Only occasional visits of priests travelling on Portuguese or French boats were allowed.

The same attitude prevailed between 1795 and 1802 under British rule.

Whenever the ships docked in harbours, and the nearby settlers heard there were Catholic priests, they would come for confession, and sometimes to clandestine impromptu Masses.

But in 1660, a French bishop who was shipwrecked in Table Bay was forbidden to say Mass on shore. In 1685 six Jesuit fathers, on an astronomical mission, landed on the same spot.

This is an extract from the journal of one of them, Fr Tachard: “Hardly had we taken possession of the Observatory, when the Catholics of this Colony, who are fairly numerous, got to hear of it and showed very great interest…” They could visit the sick in homes and hospital but they were not allowed to say Mass, other than privately on their ships.

When I was writing my book, The Broken River, I took guilty pleasure in the Catholic Church’s absent voice during the mess of colonialism. That is because the book is written from the point of view of the Xhosa chief Maqoma, who was fascinated by the message of The Word but castigated the tendencies of what Kierkegaard termed Christendom, and the use of the Bible message to subjugate and exploit nations for colonialist gain.

In 1804 the Dutch commissioner-general, Jacob de Mist, declared “religious toleration” in the Cape Colony, prompting three priests from Holland to come for the purposes of attending to the “scattered Catholic flock” — only to be expelled the following year when the British took over the government.

In 1818, Pope Pius VII appointed the Benedictine Dom Edward Bede Slater as the first vicar-apostolic of the Cape. But he never set foot on South African soil as the government in London forbade him to go there, so he went to Mauritius. Likewise his successor, Dom William Placid Morris, resided in Mauritius, never putting foot on South African soil.

Sir Benjamin D’Urban, the governor of the Cape Colony after whom Durban is named, feared “the papist riotous lot”, thus petitioned the pope to appoint a resident Catholic bishop for the region. Thus Bishop Raymond Griffith, third vicar-apostolic of the Cape, became the first resident bishop of South Africa in 1837.

With this began the official history of the Catholic Church as a visible institution. I am often aware of his eminent presence whenever I go for Holy Communion at St Mary’s cathedral in Cape Town, which Bishop Griffith built.

The spread of the Catholic Church into the Eastern Cape, Natal and beyond after that is detailed in Fr Anthony Egan’s article in The Southern Cross dated September 6 & 13.

During the decades of apartheid rule, the hierarchy of the Catholic Church initially adopted a conciliatory stance towards the Nationalist government. They were more concerned with maintaining the Catholic school, hospital and welfare institution networks.

To their credit, the Church opposed the Bantu Education Act, and fought to retain the Catholic education system. As a beneficiary of Catholic education I am grateful it created a space for the likes of me to get something close to proper education during the apartheid era, even as I am a little ambivalent by the Church’s lackadaisical stance against the system.

Established in 1951, the Southern African Catholic Bishops’ Conference took its time to forcefully pronounce against racism, condemning apartheid as “intrinsically evil” only in the late 1950s.

But its real acts of heroic defiance against the apartheid regime started in the early 1970s with its support of trade unions and in the late 1970s with the coming of Soweto uprisings.

In the 1980s the Catholic Church set up the New Nation newspaper as a mouthpiece against apartheid. Many Catholic priests, religious, seminarians and Justice & Peace activists were detained without trial, and even subjected to torture.

From the early 1990s the Church’s engagement in the public square has mostly been in areas such as conflict resolution, education, development and the strengthening of democracy.

Through the Catholic Parliamentary Liaison Office, a subsidiary of the SACBC, it aims to participate in the legislative process in parliament through dialogue and encounter towards the Church’s social teachings and value.

This valuable information is distilled in a wonderful manner through the videos and booklets of this season’s Ecclesia.

I would encourage parents of young adults also to bring their offspring to these four sessions of our rich history, if they have access to it.

It is also imperative that we give children opportunity to understand why things are as they are now.

A  document released by Pope Francis that gives bishops’ conferences greater power in introducing liturgical texts will have no immediate...