Faith at the Centre for Major-General Victoria Mekute 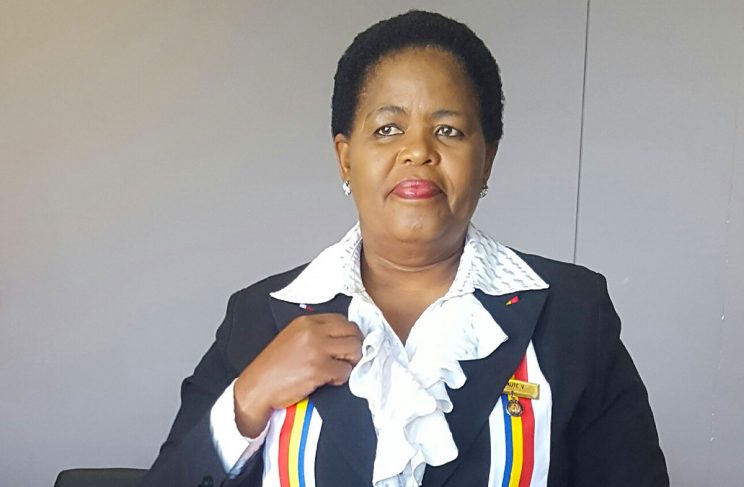 Major-general Victoria Mekute, a committed Catholic, is head of legal services in Newcastle. She is also Dundee diocesan president of the Catholic Women’s Association

Major-general Victoria Mekute, a committed Catholic, is head of legal services in Newcastle. She is also Dundee diocesan president of the Catholic Women’s Association

One of the highest-ranking women in the police is celebrating 35 years in the force this year. As a Catholic, she says her faith keeps her humble and inspires her to do acts of mercy. ERIN CARELSE spoke to Major-General Victoria Mekute.

As she celebrates 35 years of serving in the police, Victoria Mekute keeps her Catholic faith at the centre.

Now holding the rank of major-general and serving as KwaZulu-Natal’s provincial head of legal and policy services, she recalled how she joined the police in August 1982.

“I had just completed matric and was working as a temporary cashier,” she told The Southern Cross. “I heard the police force was looking for young women who were interested in joining, so I went to my closest police station.”

She completed her application forms, obtained a testimonial from her parish priest, the late Fr Phela at St Henry’s in Mafikeng, and submitted them. She was chosen from a shortlist and sworn in as an official police officer in August 1982, when she began her police training.

“I remember finding the training difficult because we women were trained the same way men were,” Major-General Mekute recalled. “But I’m a person who is positive and sees the beauty of every situation, and triumphed.”

After training, she was posted to the Mmabatho District Commandant’s office in the human resources management department.

“We were integrated with men, which was a bit tough as it was a very male-dominated environment, but we stood our ground, showed them we had gone through the same training, and deserved to be there. Gradually we earned their respect,” she said.

Maj-Gen Mekute earned a bachelor of criminal prosecution degree from the University of Bophuthatswana in 1990, and in 2000 a law degree. She was admitted as an advocate of the High Court of South Africa in February 2001 in Mmabatho.

On arriving in Newcastle, Maj-Gen Mekute attended the Catholic Women’s Association (CWA) annual conference in Witbank diocese. At that conference, she established that the CWA existed in Dundee diocese, within which Newcastle falls, but only in parishes within Mpumalanga, and in only one parish in all of KwaZulu-Natal.

In 2006 she invited the CWA at her previous parish, Calvary church in Potchefstroom, Klerksdorp diocese, to visit her at her new parish, Maria Consolata in Newcastle.

At the time she had already recruited 30 women for the CWA. The new members underwent their spiritual formation for two years and in 2008 their investiture was witnessed by Witbank diocese’s CWA.

Maj-Gen Mekute was elected Dundee diocesan president at the inauguration of the diocesan association, presided over by Bishop Graham Rose.

“Being a member of the Catholic Women’s Association is what encourages me to be meek and humble — and I find it easy to do acts of mercy,” she said.

That inspiration to do acts of mercy has led her to serve as a patron of the new Napier Centre 4 Healing (NC4H), launched for drug rehabilitation of those who cannot afford it, at Ekukhanyeni mission station near Verulam.

That engagement goes back to early 2015, when Maj-Gen Mekute participated in a dialogue with homeless people in Durban, facilitated by the Denis Hurley Centre.

“The purpose for the police and the university of KwaZulu-Natal was to hear from homeless people how they survive on the streets, what could be done to help them and, where possible, how they could be reconciled with their families and the community,” she said.

The Napier Centre 4 Healing, expected to open in the new year, will be based on a strong Catholic ethos in terms of a whole-person approach to healing and a belief in grace-filled personal transformation.

“I pledged my support to the NC4H publicly, to encourage others to do the same,” Maj-Gen Mekute said.

Safety of the Homeless

“As a Christian and a law enforcement officer, I am always grateful to be part of the programmes that benefit people in need of care, and also serve as a social crime-prevention strategy,” she said.

“One person rehabilitated means one person off the streets. Drug abuse in Durban, in particular, is devastating our community.”

She noted that committed individuals in different careers and professions will be needed at times to provide pro-bono and voluntary services at the centre.

“And I am prepared to offer my services — without prejudice,” Maj-Gen Mekute said.