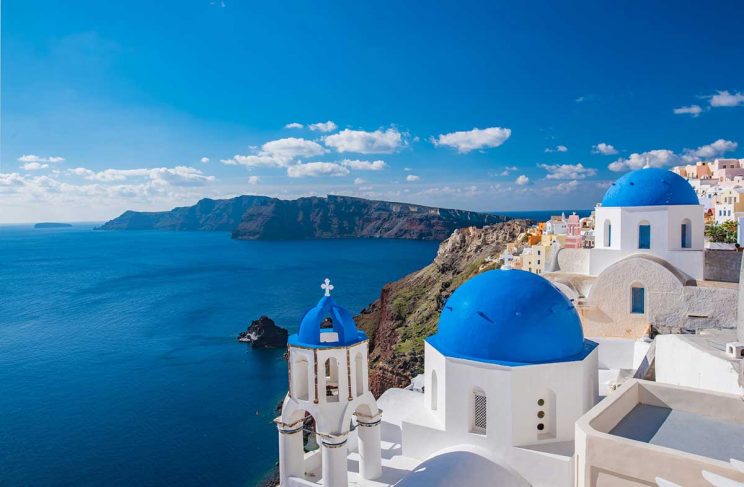 Greek Orthodox church in Santorini. The company Lidl has used the images for its marketing campaign with the crosses on top of the buildings erased.

The secularisation of the West is gathering at a relentless pace. As we report this week, some 53% of people in Britain, especially the young, say that they have no religious affiliation.

While in Britain the loss of religious faith is more advanced than in most other countries, the rest of Western Europe is not lagging far behind.

But even as the Christian Church in European countries is diminishing in size, it remains at least a cultural marker for their societies, especially at a time when these cultures are perceived to be threatened by an influx of migrants from different cultural and religious backgrounds.

But just as it is easy—and profoundly dubious—to use the cross as a supposed shield against cultural shifts, so it is also easy to deny the cross altogether.

The latter option is one exercised recently by the German supermarket chain Lidl, which has some 10000 branches throughout Europe.

To illustrate an advertising campaign for and packaging of a new range of Greek delicacies, Lidl used the image of the emblematic blue-domed Orthodox churches on the Greek island of Santorini. Lidl then decided to digitally remove the crosses from the domes, denuding these churches from their very purpose.

Surely, if one wishes to maintain religious neutrality in branding, one should not use images of religious buildings to promote brands.

As a marketing exercise, the campaign backfired on the retailers. Obviously, Greek Orthodox Christians in particular were deeply offended, but the removal of the crosses drew protests from many Christians, and was widely condemned even by unlikely defenders of religion.

Lidl said they excise all religious symbols from their branding in case they might cause offence and division. It is reasonable that a supermarket chain should maintain sensitivity on matters of religion. But, ironically, in trying to be sensitive about religion, Lidl ended up being crassly insensitive to it.

Surely, if one wishes to maintain religious neutrality in branding, one should not use images of religious buildings to promote brands.

And, it must be asked, to whom exactly is the cross offensive? As it is, in some countries, even allies of the West, the public exhibition of the cross is restricted or even forbidden.

Some national offices of Lidl have since apologised for the faux-pas, but it must be a source for alarm that nobody in a chain of decision-makers—from the graphic designer who photoshopped the images to the marketing director who approved them — thought to question the prudence of removing crosses from a photo of a church.

It is a mindset that gives rise to a more chilling question: If it is seen as acceptable to remove crosses from photos of churches, will it one day be acceptable to remove crosses from actual churches? When the Legionaries of Christ, a Catholic order, built a church at Migdal — the biblical Magdala — they were advised by the Israeli government that they may not display Christian symbols, including the cross, on the church’s facade.

As it is, in some countries, even allies of the West, the public exhibition of the cross is restricted or even forbidden.

When the Legionaries of Christ, a Catholic order, built a church at Migdal — the biblical Magdala — they were advised by the Israeli government that they may not display Christian symbols, including the cross, on the church’s facade.

In Saudi Arabia churches may not even exist.

In the West, the threat to Christianity is posed not by migrants from the East but from those who were raised in a Christian environment and now seek to erase it.

In Western societies, including a significant section of South Africa’s, Christianity is being increasingly marginalised.

Of course, Christian churches still have an influence on secular life in most Western countries—and not invariably for the good. But at the same time, the Body of Christ is treated with disrespect and indifference, even hostility and exclusion. As Christians, our task is to fight against all prejudices, including and especially those we hold ourselves.

No doubt, many of the “Nones” — those who declare to have no religion — reach that stage not by a process of philosophical introspection but by having been exposed to that disrespect, indifference, hostility and exclusion.

The secularist worldview in the West seeks to marginalise and disempower religion — and in many cases that desire may be motivated by genuine, if misguided, intentions.

But these four elements also comprise the recipe for prejudice against groups of people — and many Christians are themselves guilty of applying some or all of these to other groups.

As Christians, our task is to fight against all prejudices, including and especially those we hold ourselves.

And when we are prejudiced against, then we must act on that as well. And that is possible, as the Lidl supermarket chain has learnt.