Is Baptism by Immersion Catholic?

A friend who watched a televised Mass on German television noticed that the sacrament of baptism was celebrated by total immersion. Is this a general practice? I have not come across this system and know of no Catholic churches with a pool of some sort to accommodate immersion. Paul Schwieger

Baptism by immersion means ducking the candidate either wholly or partially under water. In the New Testament, John the Baptist did so, although his was not Christian baptism. 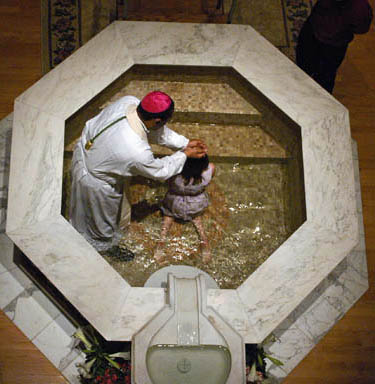 It is clear to us from Mark 2:10 that, when John applied this rite to Jesus, he did so by immersing him pretty deeply into the Jordan River: No sooner had he come up out of the water than he saw the heavens torn apart.

In the Church’s early days, converts were generally baptised like this, but as the Christian faith grew and spread, it became difficult to find rivers or lakes for conferring the sacrament of baptism, so it was also done by pouring or sprinkling water on the candidates heads. This is the general liturgical practice today.

Since the time of Vatican II, which recommended a review of all liturgical rites, there is now the option of baptising by immersion when this is feasible, and it seems there are a good few dioceses around the world where this is done, not only in Germany. As you indicate, a special pool has to be built for the purpose.

The Rite of Christian Initiation for Adults says: Either immersion or the pouring of water should be chosen for the rite, whichever will serve in individual cases and in various traditions and circumstances (213).

Usually, an adult kneels in a pool of water about 60cm deep and the priest or deacon pushes the head into the water three times, saying the baptismal formula. There are other ways of doing this, depending on circumstances, and when immersing Infants, they must be supported carefully and gently.

For St Paul, being ducked into water is like going into the tomb with Christ, and coming up again is like rising with Christ to a new life (Rom 6:4). The symbolism of this ducking can be powerful within the solemn ceremony, and that is why it is now permitted. It is the original and full sign of our new life (Catechism, 628).