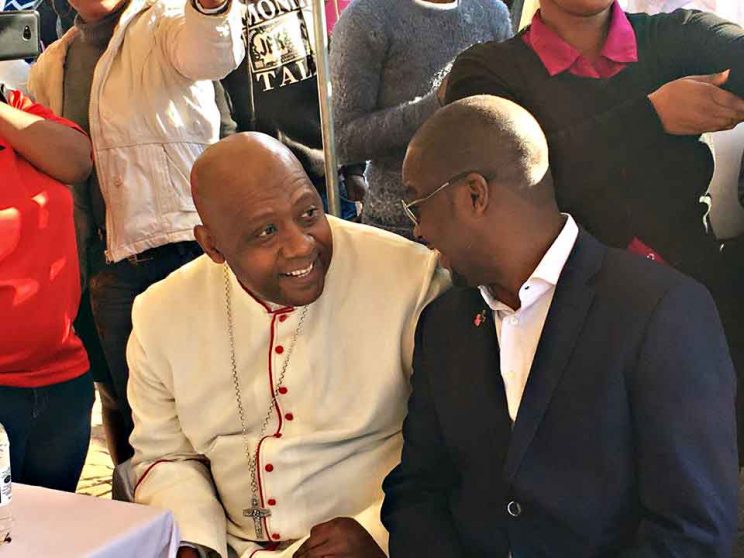 Bishop Victor Phalana of Klerksdorp chats at a HeForShe event organised by Justice & Peace which brought out 600 people, including local tavern owners, to speak out condemning violence against women.

Tavern owners from Khuma, Kanana, Tigane, and Jouberton in Klerksdorp diocese mobilised their patrons, and attended an event as part of the HeForShe campaign.

With the street closed off, close to 600 people gathered to reflect on the rape culture and increase in killing of women in their communities.

What the Campaign is About

The HeForShe campaign is a global initiative run by the United Nations’ women’s department to fight violence against women.

It previously held a three-day training workshop, the HeForShe Taverns Project, facilitated by the diocesan and national Justice & Peace offices of the Southern African Catholic Bishops’ Conference (on which The Southern Cross reported).

Bishop Victor Phalana of Klerksdorp, who attended the event, said where it was hosted was very important.

“We had chosen to close the street in front of a very popular tavern in the township. We wanted to preach the message out there in the community and not in the comfort of a building, like Pope Francis encourages us to do,” Bishop Phalana said.

“We were very thankful that tavern owners came out and spent the entire day with us, considering it would have been a busy day for them in terms of business.

“This confirmed for us their commitment to fighting any form of women-harassments, as well as their agreement to not sell alcohol to under-age and pregnant women,” he said.

Activities on the day included testimonies from tavern owners, patrons and their partners on the impact the campaign had on their relationships at home and in the tavern communities at large.

A HeForShe Taverns Pool Tournament will be launched in September to run through to December, leading up to the 16 days of activism.

The tournament will be another avenue to stimulate conversations around the role of men and boys in ending violence against women, and for increasing HeForShe sign-ups.