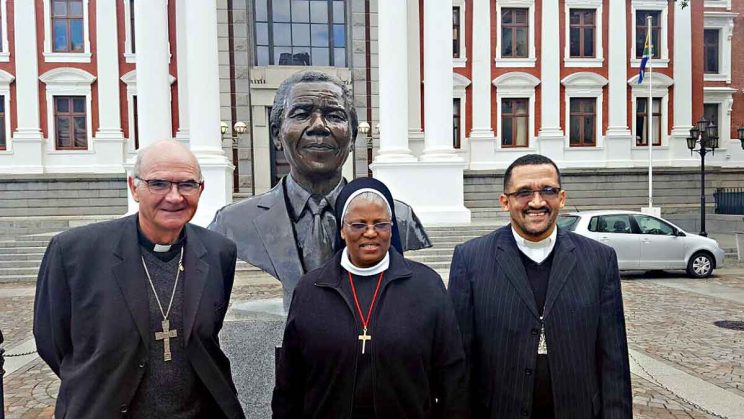 Archbishop Stephen Brislin, Sr Hermenegild Makoro CPS and Bishop Sithembele Sipuka with the Nelson Mandela statue in front of parliament, having just made a submission on the CRL Commission’s report on the Commercialisation of Religion and Abuse of People’s Belief Systems.

A high-powered delegation of the Southern African Catholic Bishops’ Conference (SACBC) made a submission to a parliamentary committee on the abuse of religion.

The SACBC delegation was among faith groups that addressed the portfolio committee on Cooperative Governance and Traditional Affairs on the report of the “Commercialisation of Religion and Abuse of People’s Belief Systems”.

Recent controversial news reports about pastors have raised questions about whether religion has become a commercial institution or commodity to enrich a few.

Report a Response to “Religious” Abuses

The Commission for the Promotion and Protection of the Rights of Cultural, Religious and Linguistic Communities (CRL), a Chapter 9 Institutions, published a report in which it recommended to Parliament that all religious practitioners be registered under umbrella organisations.

“The report is essentially a response to the various reports of pastors making people drink petrol, spraying them with insect killer, and so on,” Mike Pothier, Research Coordinator for the Catholic Parliamentary Liaison Office told The Southern Cross.

“It also looks at some shady financial practices: churches ‘owned’ by pastors, private and parish bank accounts not kept separate, and so on.

“The report sets out a long list of recommendations and findings which ultimately amount to an attempt to impose regulation on the faith community — registration of ‘religious practitioners’ and ‘worship centres’, and so on,” Mr Pothier explained.

The CRL Rights Commission in its report argued that there are several reasons for the religious sector to be regulated. Therefore, after an extensive investigation, an amendment to the Promotion and Protection of the Rights of Cultural, Religious and Linguistic Communities Act no. 19 of 2002 (CRL Act) was recommended to assist all religious institutions to create an environment where they, and not the state, can effectively regulate themselves.

Thereby religious bodies could hold accountable people who bring religion into disrepute, as per their various religious systems.

This, the commission argued, would ensure that freedom of religion is guaranteed and that the religious sector is given space and capacity to resolve challenges.

The Catholic Church and other faith bodies disagree with that view, Mr Pothier said.

“In our view, and that of almost everyone else in the sector, such provisions would amount to a major violation of the right to freedom of religion and worship.”

Lessons to be Learnt from the Zuma Years