Monsignor Paul Nadal Has a Garden Named in his Honour 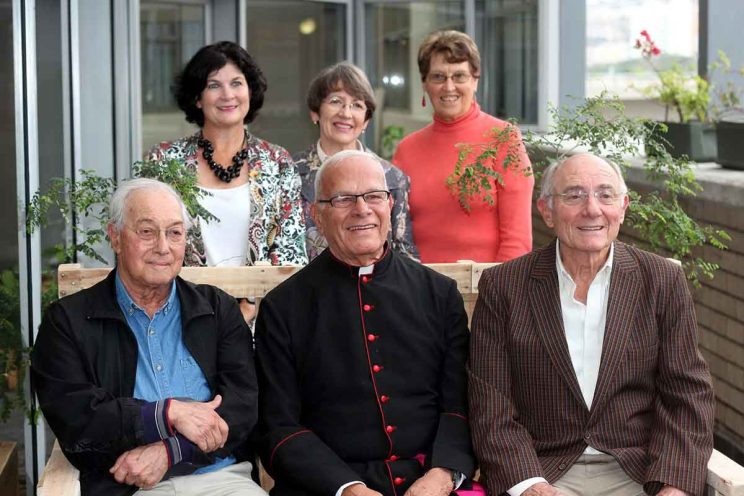 On the new terrace garden at the Denis Hurley Centre in Durban are (front from left) Sydney Duval, Mgr Paul Nadal and Manrico Barbieri, and (back) gardeners Roanne Scott, Victoria Brennan and Coral Vinsen.

By Sydney Duval – The Denis Hurley Centre in Durban has added a splash of green to the busy commercial hub surrounding it in naming the centre’s upper terrace the Paul Nadal Garden.

Paddy Kearney, one of the main inspirations behind the development of the centre next to Durban’s Emmanuel cathedral, described the action as recognition of Mgr Paul Nadal as a patron, trustee and generous donor to the centre — a place seen as a home for the homeless and refuge of the distressed.

Family, friends, clergy and religious met at the centre to celebrate the naming, blessing and opening of the meditative garden and its companion terrace collection of Mgr Nadal memorabilia, hosted by centre director Raymond Perrier.

A strong presence from Mariannhill affirmed Mgr Nadal’s work as founding director of Khanyisa Pastoral and Catechetical Institute — and his co-authorship with Sr Theodula Müller CPS of the “People of God” series on South Africa. Also present were Mgr Nadal’s nieces Loueen Tolken and Gillian McGregor.

Two friends of some 60 years, journalist Sydney Duval and retired businessman and local Church stalwart Manrico Barbieri, paid special tribute to Mgr Nadal, 85, sketching his personality, achievements and long service to the local Church. This included a PhD in philosophy on transcendence in Marxist philosophy from a Christian perspective.

Mr Duval recalled signposts to a friendship that began with a train journey in 1958 from Durban to St John Vianney Seminary in Pretoria. Mgr Nadal was in his sub-diaconate year, already a graduate in law; Mr Duval in his first year of philosophy.

He came to know Mgr Nadal for his irresistible sense of fun — “and his personal interest in my wellbeing”.

“I was struck by Paul’s formidable talent for intuitive discernment of people and situations,” Mr Duval recalled. “His insights were usually sharp and forthright. This mellowed with age and is now more of a prising open rather than an extraction without a painkiller.”

Another signpost was Mgr Nadal’s ordination in Emmanuel cathedral on December 8, 1959.

“One Sunday morning, a few weeks later, I drove Paul and his mother to Montebello mission where he would learn Zulu. He carried his suitcase down the steps, knocked on the door, and his priestly life had begun. But the Ford Prefect I was driving back to Durban was on the verge of flooding with a mother’s tears,” Mr Duval recalled.

In 1987, Mr Duval had moved on from fulltime journalism to working as personal assistant to the late Archbishop Stephen Naidoo of Cape Town. This took him to the bishops’ plenary sessions where Mgr Nadal appeared in 1992 to introduce RENEW as one of the ways of implementing the Pastoral Plan.

READ  Shepherds on the Green: A Relaxing Day off for Priests

“Paul spoke with a passion that lit a fire in many of us. Here was something new, something heartening, something inviting to grab hold of,” Mr Duval said.

Mgr Nadal was present in Cape Town’s Good Hope Centre when 10000 local Catholics, with Archbishop Lawrence Henry, “illuminated that vast structure with their candles, their music and their faith to launch RENEW”, Mr Duval said. 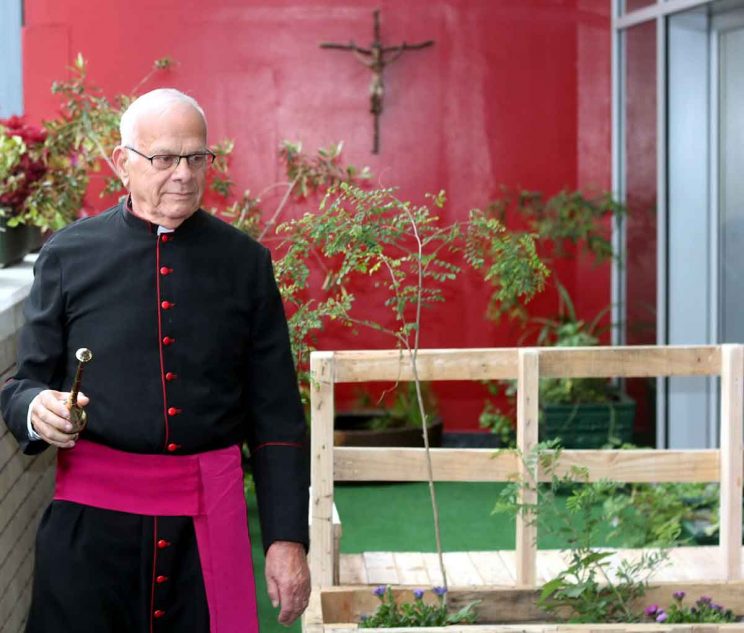 Mgr Nadal blessing the terrace garden named in his honour.

“Supporting the Pastoral Plan, of being ‘a community serving humanity’, has been an ongoing part of Paul’s ministry, even to this day.”

Mr Duval spoke of Mgr Nadal demonstrating “his own humanity through friendship — in good and hard times, celebration, death and mourning, and for laicised priests living with distress in dire adversity”.

“Paul knows all about the ecstasy and struggle of the spiritual and priestly life. But he has kept the faith. He has helped so many others do the same,” Mr Duval noted.

“Naming this amenity the Paul Nadal Garden is a fitting honour. A valiant, compassionate heart of Durban beats here and in these surrounding streets,” he said.

Manrico Barbieri, a close friend of Mgr Nadal since schooldays at St Henry’s Marist College in Durban, applauded the dedication of the garden in the name of Paul Nadal as a fitting tribute to someone who had given exemplary service in his ministry for an unbroken 58 years.

“It also entrenches the memory of his close relationship with his mentor, Archbishop Denis Hurley, whom he served as vicar-general from 1983 to 1992,” Mr Barbieri said.

Mr Barbieri said Mgr Nadal’s 30 years’ residence in the grounds of the Assumption church provided an opportunity to develop his love of gardening for flowers, fruit, herbs and vegetables: “In season, when visiting us, he often brought brinjals, wild bananas, herbs like basil, rocket, and homemade Mauritian mazavaroo.”

The garden team comprised landscaper Victoria Brennan and Coral Vinsen, both experts on indigenous plants, Roanne Scott and Holy Family Sister Cathy Murugan, who runs the centre’s Sustainable Livelihood and Employment Service — all with Mgr Nadal’s collaboration in planning and setting up the terrace garden. The bench, flower box and stands were made by Eddie Majola from recycled pallets.

Sr Murugan said the garden is an invitation “to come and rest awhile”. It also offers a homeless person employment through tending the garden and selling the excess herbs and vegetables.