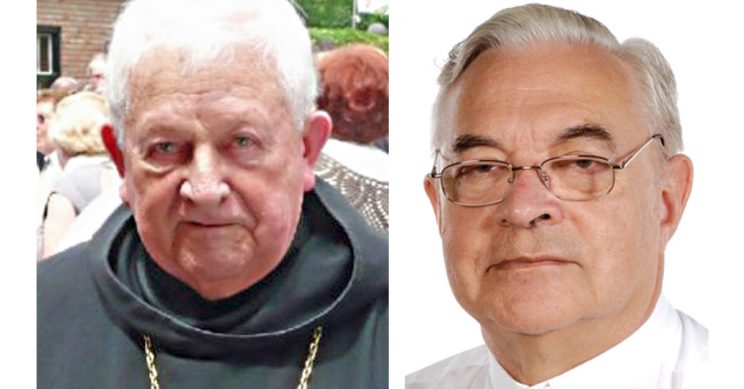 Bishops Fulgence Le Roy OSB (left), retired of Polokwane, and Herbert Lenhof SAC, retired of Queenstown, who died within days of another in their respective home countries.

Two former bishops in South Africa died within a day of one another in their respective home countries. Bishop Herbert Lenhof, retired of Queenstown, and Bishop Fulgence Le Roy, retired of Pietersburg (now Polokwane) died on October 13 and 14 respectively.

“Bishop Lenhof devoted himself to the problem of Aids, with the heart-rending reality of children orphaned as a result of the death of parents from Aids,” said Pallottine Father Barry Reabow of Queenstown.

“After the change-over to a democratic South Africa in 1994, problems for him did not cease: the ever-increasing criminality, the threats to and destruction of family life and the neglect of children were all factors weighing heavily upon him,” Fr Reabow said of his confrere.

Born on August 20, 1936 in Völklingen, south-western Germany, Herbert Lenhof was the eldest son of four children born to Wilhelm and Elisabeth Lenhof who were deeply religious. Two of his sisters entered the consecrated life—bith, like him, in the Pallottine family.

A diligent altar server and boy scout, Bishop Lenhof joined the Society of the Catholic Apostolate, as the Pallottines are formally known, and was ordained to the priesthood on July, 18 1965.

His wish to be a missionary was granted when on June 20, 1968 he was sent out from Germany to South Africa.

From 1970-78 he was both priest-in-charge and administrator at the Glen Grey Mission Hospital, near Lady Frere, which was later taken over by the state.

After he left the hospital, Bishop John Rosner appointed him parish priest of the Ntaba Maria mission parish, and, at the same time, spiritual Director to the Ntaba Maria Sisters.

From 1978-1981 he was the major-superior of the Pallottine Fathers and Brothers in South Africa.

In 1984, Pope John Paul II named him bishop of Queenstown, succeeding his confrere Bishop Rosner on April 28, 1984. Bishop Lenhof chose as his motto, “You will be my Witnesses” (Acts 1:8).

Bishop Lenhof, who had long suffered ill health, retired on November 16, 2009. He later returned to Germany, taking up residence in the frail-care section of the Limburg house of the Pallottines.

“We will always be thankful to Bishop Lenhof for his gentle, selfless ministry as a Pallottine, as a dedicated priest and missionary, for his deep-seated devotion to his pastoral duty as a bishop; for his love of his people in his missionary life, for his patience in his suffering, never complaining, and for his inspired love for the charism of St Vincent Pallotti,” Fr Reabow said.

Bishop Fulgence Werner Le Roy was known to many as “the friendly folk man”.

Within a year he was sent to South Africa as a missionary, serving in what was then called the Northern Transvaal.

Aside from his pastoral work, he taught at Turfloop University.

He was elected abbot of St Benedict’s Abbey in Polokwane in July 1975, and made bishop of the titular see of Ausafa at the same time.

As abbot he led the relocation of the monastery to the Subiaco mission station, 40 km from Polokwane.

Bishop Le Roy became the first bishop of the diocese of Pietersburg, previously the prefecture-apostolic of Louis Trichardt, on December 15, 1988.

Bishop Le Roy retired in December 2000 at the age of 75. He then served as parish priest in Haenertsburg under his successor, the late Bishop Mogale Paul Nkhumishe, before returning to Belgium in 2007.

He was found dead in his room on the morning of October 14 after he did not arrive for Mass.

His Requiem Mass was celebrated at Affligem Abbey on October 21 after which he was buried at the monastery church.