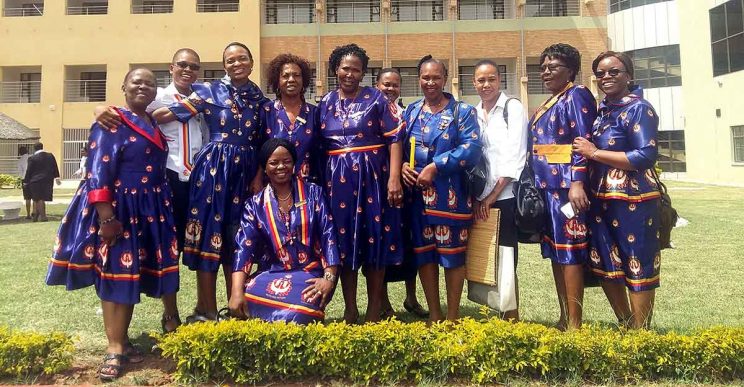 The CWA in Botswana, which forms part of the SACBC region, was founded in 1996 with the approval of Bishop Boniface Setlalekgosi of Gaborone.

It was inspired by the ideals and living of a group of committed women from Atteridgeville, Pretoria.

“The Pretoria archdiocese had housed Botswana, Kimberley and other dioceses, so we started off as the Gaborone diocese and the Kimberley diocese. With the acceptance of Bishop Setlalekgosi, we were allowed to start the CWA in Botswana,” said CWA Botswana president Keba Nyathi.

Initially the bishop was hesitant about the women starting immediately as he wanted to make sure they understood what they wanted to be, and what CWA was all about.

When he saw the women’s work in the parish in line with their motto of “Faith and Action”, he allowed them to spread into other areas within the diocese.

When they had more than five branches, and had walked the journey for a number of years, Bishop Setlalekgosi was convinced they had good intentions and determination, and that they understood what the CWA was.

Gradually the group started growing, and now has more than 400 women within the two Botswana dioceses of Gaborone and Francistown.

To mark their 21 years of existence, they pulled together resources through their spiritual advisor, Fr Tefo Bolokwe, who invited other priests to the conference to share the word of God and the importance of their commitment.

The CWA adopted as its theme “Life in the Spirit”, fitting within the overall objective of the association, and suggesting growth in faith inspired by the Holy Spirit.

“We often emphasise the role of the Holy Spirit in our spiritual journey,” she said, adding that they let the Spirit work in their efforts to “inculcate values of good citizenship in our children”.

Mrs Nyathi said that in the past “this knowledge about the Holy Spirit was not as much emphasised as it is today”.

At this year’s conference, through a donation of 10000 pula (about R14000) by a parliamentarian, clothing was made to help the orphanage in the Ghanzi district in the Kgalagadi region.

Inspired by their motto of “Faith and Action”, CWA members continue to take on practical projects, responding to St James’ warning that “faith without works is as good as dead”.

Members have, through the years, rendered untiring service to the Church, family and society, through activities that demonstrate the virtue of mercy. This includes reaching out to the needy in their communities.

The association is sustained by reading spiritual books, meditating on the word of God, attending retreats and workshops, as well as by interacting with other CWA members, particularly in inter-diocese forums.

The aim of the CWA is to emphasise to members that they are first of all Catholics through participating in the sacramental life of the Church, then through training other women in leadership, and building and promoting the welfare of the youth.

This means the CWA contributes to community activities, and also imparts moral and Christian values.