Journey from Gangs to God 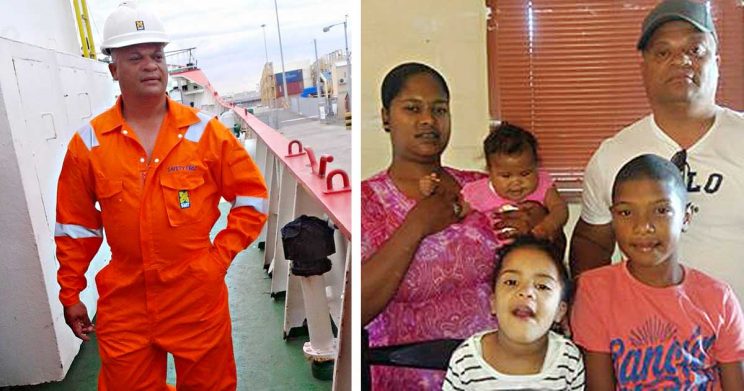 Jerome Opperman with his wife Carmelita and their children at their home in Oudtshoorn. This Christmas they’ll be without their Dad. (Right) Jerome at work

In prison he was a gang general until a visiting priest offered him a biscuit. Today Jerome Opperman is devoted to the Catholic faith and his young family — who’ll be without their dad this Christmas.

This year the Opperman family in Oudtshoorn in the Klein Karoo will celebrate Christmas without their father — and in some way, that’s a good thing.

Jerome Opperman, 40, will be working in Qatar as an offshore catering manager. After many years of irregular employment, this posting means there will again be food on the festive table at home.

For many years there was little joy for the Oppermans. Jerome found it very difficult to get work — because he was a former prisoner.

In jail, the former member of a violent gang had turned his life around thanks to his Catholic faith. Before that conversion he had been in and out of jail since he was a child. In 1996 he was sentenced to a long stint in jail.

“Religion had never played a role in my life,” he told The Southern Cross. “I didn’t care about religion at all. When I came to prison, the prison gangs became my religion.” And his dedication to that life, including a willingness to commit acts of violence, saw him rise up the gang ranks rapidly.

“I led several gang wars within different prisons but that all ended in 2004,” said Jerome, whose chilling prison nickname was Panga.

“One morning, while I was busy with my 30 minutes of exercise in the courtyard, a fellow gang member told me that there was coffee in the church for free. I went inside and there I met Fr WimLindeque [now of Stellenbosch] who told me with a soft and quiet voice to come inside, offered me a seat and told me that I was welcome to take a biscuit too.”

The conversation that followed led to Jerome’s conversion to Catholicism. “My whole life changed,” he recalled.

Fr Lindeque and Jerome discussed for weeks how to “reach out to the hearts and souls of my fellow inmates so that they can be empowered through education and through the Church”.

The result was a 40-day programme called Total Transformation which emphasised a moral value system. Jerome wrote a training manual to implement that programme. Apart from the stress on moral values, it focused on self-identity.

“The Catholic Church teaches you to be your true self. As we grow up, we adopt identities different from those we are born with when we were pure and innocent. I was called Panga and not Jerome anymore. My name became Panga and I adopted a false identity. So the aim of the programme was to cleanse you mentally and physically to go back to the identity you had the day you were born.”

He was released in 2008, but his degree was of little help. “Here I was now with all the qualifications for the corporate world—but I had a criminal record,” he said. “I had so many interviews but never got a job as a result of my honesty in admitting that I came from prison.”

Jerome jobbed as a gardener and in a factory in Cape Town, but fled the city after an assassination attempt in which he was shot seven times. One thing he was sure of: “I will never go to back to prison!”

In 2010 he had a breakthrough when he got a job on an oil rig as a cleaner in the catering department, soon earning a promotion. Other contract work has followed in Angola, Mozambique, Gabon, Italy and Qatar. He has also worked for the government. But contract-work is irregular. Permanent employment, with a steady income, is still almost impossible to come by because of his prison record.

And Jerome is one of the lucky ones.

Challenges to Life Outside

“The biggest challenge after release from prison is the fact that this ex-inmate has to start a new life afresh. You come out with no resources and you also have the axe of society hanging over your head. You are going to be judged. You will endure hardships,” he said.

“In jail you are in a comfort zone with no sense of responsibility because you get food, your washing is being taken care of, you sleep warm. Now you come out of prison and all of a sudden you must work to get food on the table,” he said.

“So many ex-prisoners are looking for work, but when they are rejected because of their criminal record, they go back to crime because they must also eat and wear clean clothes. Society is also responsible for crimes committed against ex-prisoners. If they opened the doors of opportunity in the first place, that ex-inmate wouldn’t need to dive back to a life of theft and robbery.”

To address that problem he has set up an organisation, South African ex-Prisoners Organisation for Equal Rights (SAPOR), which he hopes to get off the ground in 2018 to offer ex-convicts life-skills programmes and prepare them for the job market.

For that he needs funding, and being away on contract-work makes sourcing sponsorship difficult.

When he is not working, Jerome is trying to get other social upliftment projects going. His big goal is to set up a free Internet café in his dirt-poor community, especially for young people.

“There are hundreds of youths in my community who do not have access to the Internet for their schoolwork and assignments,” he says. He has been upgrading old computers for that purpose.

“I also want to conduct life-skills courses and IT development for the young people so that they can have a chance in life other than joining gangs,” he said.

But all that is on hold while he is in Qatar on contract work until next June — a time that also includes Christmas.

He recalls some tough festive seasons. “I remember Christmases when there were no presents, and the only food we had was a R5 packet of sausage and rice,” Jerome recalled.

“But I had my eyes set on Jesus and I had the guidance of the Catholic Church,” bringing him through when his faith was tested. “Today I sing ‘Hallelujah’ because I can have Christmas presents for my family, buy a Christmas tree full of lights, and sing Christmas carols with them,” he said.

“But one thing my family will not forget is the love for Christ, and the love shown by our Church and our fellow human beings. That is what I teach my children every day.”

This Christmas will be tough for a different and much more welcome reason. Working in Qatar, Jerome said he will miss his family especially at Christmas, and they will miss him. But with modern technology he will be able to communicate with his wife Carmenita and their three children aged eight, four and 6-months-old.

And this year there definitely will be food on the Opperman table — even if Dad is missing.