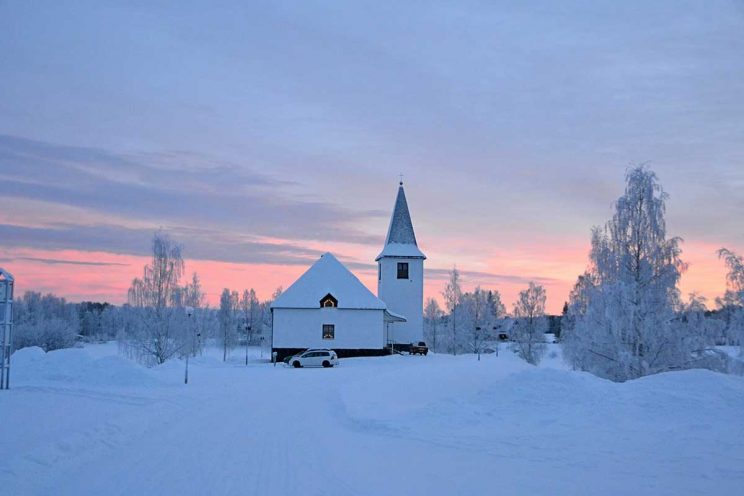 Even though it is one of the most secularised nations in the world, Sweden is one of the few countries in Europe where the Catholic Church is growing, said the country’s first cardinal.

This kind of revival shows “it is possible to live a good life as a church even if we are few,” Cardinal Anders Arborelius of Stockholm told Catholic News Service.

“Maybe that sign of hope is something we could offer to those countries that are experiencing a very severe process of secularisation,” he said.

Elevated to the College of Cardinals by Pope Francis in June, the cardinal was in Rome in early December to take possession of his “titular” church – Michelangelo’s Basilica of St. Mary of the Angels and Martyrs.

“We are very overwhelmed by this fantastic church,” he said, as his eyes swept up toward the wide vaulted ceilings and high walls decorated with lush frescoes. The Catholic Church has “nothing like this in Sweden; we’re a very, very small community.”

The cardinal had met with the basilica’s parishioners for the first time and they showed him some of the church-run projects aimed at serving the disadvantaged and those who live on the streets around Rome’s nearby central train station.

The 68-year-old cardinal said he could see a connection between this urban parish in Rome and his cathedral in Stockholm as members of both communities dedicate much time to working with the poor and marginalised, and with immigrants from Catholic and Christian communities.

All Christian Communities are Like-minded on Migration

While the Catholic Church in Sweden is just a small minority in a once predominately Lutheran country, all the Christian communities there “have a common voice on migration and refugees,” he said. “And now we are more critical against the official policy” because the government is making it difficult for family members to be reunited in Sweden and young people are being expelled.

Sweden used to have a “very open policy” on receiving refugees, which explains why the country had seen such a large uptick in the number of practicing Christians and Muslims in the country, he said.

“Now it is a bit more severe, more strict, so many people are sent back to Iraq or Afghanistan, for instance.” He said, those with a greater chance of getting permission to stay are refugees from Syria and Eritrea, and workers from Ukraine, which has led to a growing number of Eastern-rite Catholics in the country.

Many of the immigrants and refugees are settled in parts of Sweden where there is available housing, but few or no Catholic parishes, he said. That means “our main concern is to find them and show them that the Catholic Church is present in Sweden.”

The rapid growth of the Catholic Church has presented the problem of building enough churches and parish structures, he said.

But now, “we are able to buy Protestant churches that are not used anymore” because of changing demographics and the fact that fewer people are practicing their faith, Cardinal Arborelius said. “Sweden is a very segregated place; where the immigrants live, the Swedes move out.”

The Protestant owners, he said, offer the Catholic Church the properties “at a good price” making it “a very good ecumenical strategy.”

In a country of 9.9 million people, between 3,000 and 4,000 people register each year as already being a member of the Catholic Church, making it one of “the few countries in Europe where the Catholic Church is growing,” he said. Another 100 people on average are baptised and join the church each year, he said; they come from very different backgrounds, and many of them are “very well-educated people.”

It used to be that those who pursued a vocation in Sweden were men and women who converted to Catholicism, like Cardinal Arborelius, who converted at the age of 19.

Immigrants are Growing the Church and Clergy

But the country’s seven seminarians and a handful of religious vocations now come from Catholic families who immigrated to Sweden. “It is a sign that they have found their place in Sweden and they feel a part of the church.”

While it is not easy to evangelise with limited resources in a highly secular country, he said, people, especially the young, “are very open, interested and curious” about the Catholic faith.

“Sweden has been secularised for so long that people are curious and they don’t know nearly anything about Christianity, especially the younger generations,” he said.

Swedes are showing a renewed interest in Catholic spirituality and the social doctrine of the church, he said, “and even in our country, there is a kind of respect for the Holy Father and his message.”

As a result of Pope Francis’ visit in 2016, the “media are interested and open to our church more than before,” he said.

Then Pope Francis made the bishop of Stockholm the first cardinal in the nation’s history. “I was surprised that all the media and ordinary people said, ‘Now Sweden has a cardinal.’ Somehow they saw it as an honour for the country,” Cardinal Arborelius said. By Carol Glatz Catholic News Service