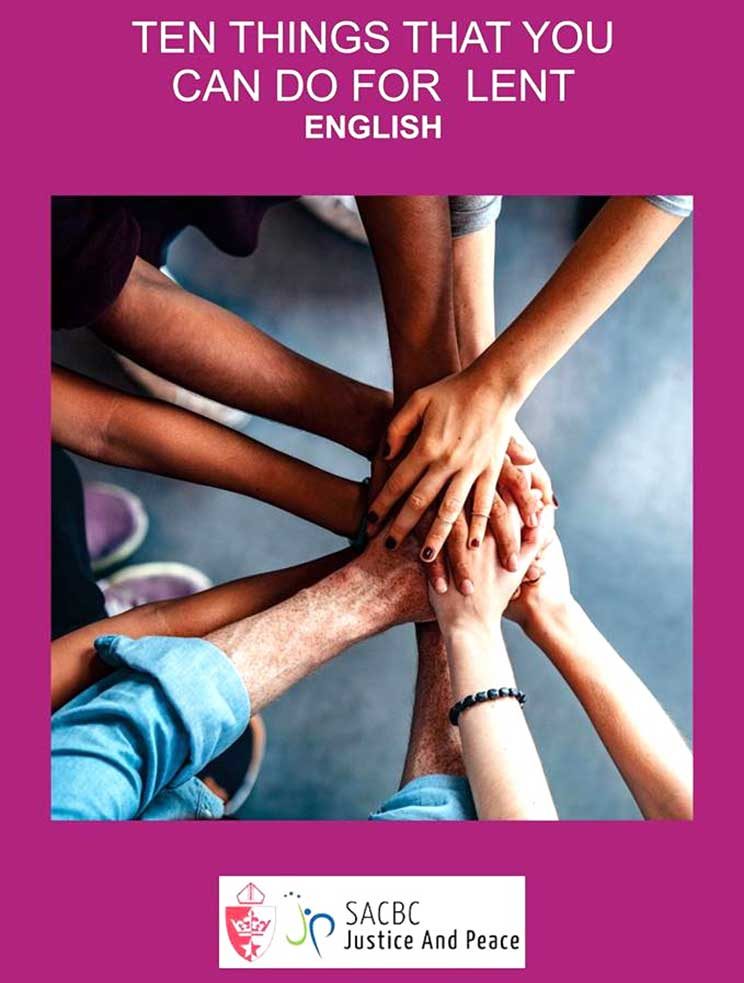 The cover of a booklet on Lenten activities to fight racism and prejudice, issued by the bishops’ Justice & Peace Commission.

The Justice and Peace Commission (J&P) of the Southern African Catholic Bishops’ Conference (SACBC) have taken various messages from the bishops’ pastoral letter on racism and racial divisions and transformed them into ten activities that can be performed as part of our Lenten observance.

In the 2016 pastoral letter, the SACBC said that “we need to have a candid conversation on racism and its manifestation in order to adequately and seriously address racism and racial divisions”.

This challenges us, as followers of Christ, to play an active role in dismantling racism and fostering racial reconciliation in southern Africa, said J&P director Fr Stan Muyebe OP.

Lent begins this year on February 14 with Ash Wednesday. Easter is on April 1.

As part of Lenten observances this year, J&P suggests these ten activities:

Make a new friendship with at least one person from a different race, ethnic group, or nationality. Remember that “we should refrain from loving only people who are just like ourselves”.

In loving only those who share our racial and ethnic backgrounds, we fall short of fulfilling the demands love which the Gospel calls for.

On every Friday, say a prayer asking God to heal and transform the difficult racial relationships in our country—as a family, as a parish, as a sodality, as a religious congregation, and as a choir or youth group. Remember that “the task of reconciliation…requires watchfulness and ardent prayer on the part of each” (SACBC Pastoral Letter on Racism).

During Lent, this year, apologise to at least one person who has been a victim of your racist remarks, jokes and behaviour. Follow the example of our bishops, who themselves have asked for forgiveness: “In humility, as St Peter confessed, we your pastors, prostrate before God and before all who are in pain, ask for forgiveness for our historic complicity with racism in the Church.”

Be aware of the prejudices that you hold against people of different races, ethnic groups, and nationalities. Resist stereotyping. Do not generalise.

During Lent this year, judge individuals based on your personal experiences with them and not on how you believe people from a particular racial group, ethnic group or nationality behave.

Silence is complicity. During Lent this year, speak out and challenge at least one person who makes racist remarks and racist jokes in your family, workplace, religious congregation, school, social media platform, or parish.

Start a conversation in your family about “race, power, and privilege”. Interrogate privilege, including your own. Take a stand against what the bishops termed “economic inequalities present in our society as a result of past racial discriminatory laws and practices”.

In rural communities where there are commercial farms, work with those of different races to tackle the following problems: the killing of white farmers, as well as the unfair living and working conditions of black farm workers.

Repent and ask God’s forgiveness for your complicity in the sin of racism and racial divisions. Remember that, as the bishops said,  “while reaching out to one another, in open and honest dialogue, the Sacrament of Reconciliation becomes especially important and meaningful because through it we come in our sinfulness to our all merciful Father for healing and forgiveness”.

“We realise that this is not an easy conversation, one that many of us may prefer to avoid,” the bishops said. “Our invitation to such a dialogue may in itself evoke a range of emotions, including self-justification and self-righteous feelings; or, guilt and denial; on the other hand, feelings of anger and sadness. Dialogue, rational and respectful, is necessary so that we open ourselves to receive God’s healing.”

Where there are divisions based on race, ethnicity or nationality, step up and play the role of a mediator. Build bridges of hope and tolerance. Destroy the walls of fear and anger.

Efforts at racial reconciliation within our parishes, workplaces, and communities should be grounded on the need to restore hope and justice.