Lessons to be Learnt from the Zuma Years 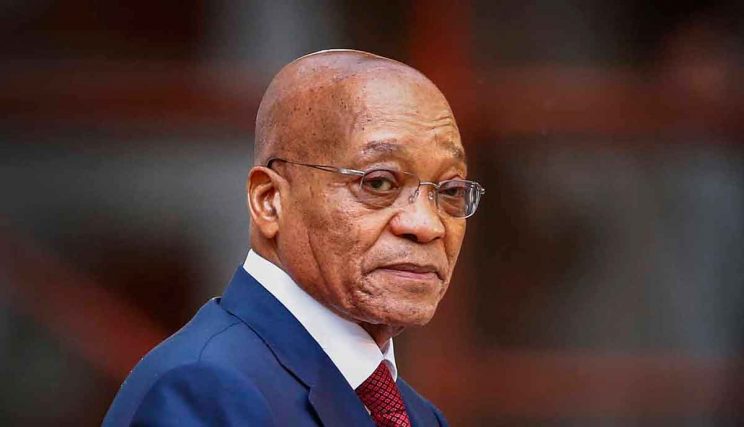 While many South Africans across the country have welcomed the resignation of President Jacob Zuma and the swearing in of African National Congress leader Cyril Ramaphosa, they are urged not to “overlook the many lessons that can be learnt from the turmoil of the Zuma years”, said Mike Pothier, the programme manager of the Catholic Parliamentary Liaison Office (CPLO) in a written response.

Mike Pothier for the CPLO

“[Mr Zuma’s] failures and wrongdoings have been thoroughly examined and lengthily documented, and may yet see him standing in the dock on serious charges of corruption,” said Mr Pothier.

Mr Zuma tendered his resignation on Wednesday evening after the party’s National Executive Committee (NEC) decided on Monday to order him to step down. Addressing the nation from the Union Buildings in Pretoria, he had “come to the decision to resign as president of the Republic with immediate effect” despite openly disagreeing with the NEC’s decision.

“I do not fear exiting political office. However, I have only asked my party to articulate my transgressions and the reason for its immediate instruction that I vacate office,” said Mr Zuma.

His resignation caps off a near-decade tenure that has been rife with scandals including allegations of corruption, accusations of rape, his dealings with the Gupta family, multi-million rand upgrades on his Nkandla home, and midnight cabinet reshuffles.

Mr Pothier stressed that South Africans need to bear in mind the following lessons from this tumultuous period: firstly, Mr Zuma was put in power “by a consortium of disaffected constituencies within the African National Congress” who were well aware of his “already notorious record of corruption, dishonesty, cronyism, philandery and self-advancement”; secondly, that the matter of his resignation was resolved in an “orderly, procedural and peaceful manner” amid weeks of tension and impatience; and thirdly, that we need to keep telling ourselves that “government rot did not start with Mr Zuma’s ascent to the presidency”, nor will it end with his resignation.

Warning for the ANC

“Too many of [the ANC’s] members and leaders believe that, as the dominant liberation movement, it has a right to govern indefinitely … with scant regard for the norms of a modern, multi-party, constitutional democracy; that it is somehow its destiny to rule the country,” said Mr Pothier.

He also added: “It is the central reason why so many otherwise decent and committed ANC leaders – cabinet ministers, MPs, top-sixers – chose for so long to overlook or ignore Mr Zuma’s depravities, thereby enabling them.”

Mr Pothier said that we should now look forward to the installation of Mr Ramaphosa as the fifth president of South Africa, who will hopefully usher in a “new and honourable era in our national politics”. 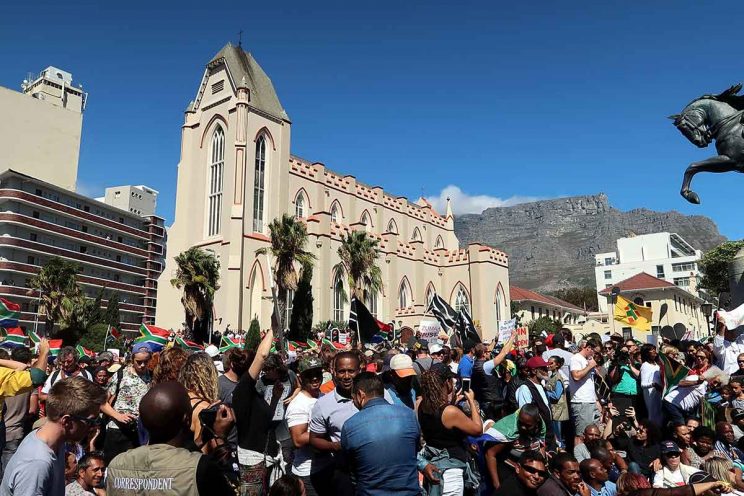 Cape Town’s St Mary’s cathedral is seen during a protest against the
presidency of Jacob Zuma and state capture outside parliament last April. (Photo: Gunther Simmermacher)

“We do not know what Mr Zuma’s fate will be. However, we do know Cyril Ramaphosa’s fate: to try to rebuild an ethos of good governance; to restore trust in the institutions of democracy; to resurrect hope for a better life for all; and to regain the straight and narrow way of constitutionalism, the rule of law, and the politics of service,” said Mr Pothier. “It is a Herculean task.”

“We are realistic enough to not be seduced into believing that all is now well with our country, and that our problems are behind us,” said Rev Booth in a written statement. “The divisions in the ANC remain, from the top six down, and will continue to place restraint on the pace of change the new President may wish to follow.”

He also extended his well-wishes to Mr Ramaphosa in his new role on behalf of the Diakonia Council.

“We will continue to pray for him and the leadership of our country in the difficult task that lies ahead,” he said. “At the same time, we will continue to exercise our mandate, which has held since the establishment of this organisation, to be the conscience of the state, and to hold the government to account by speaking the truth, in love, to those in power.”

The Primacy Of Conscience In Parliament