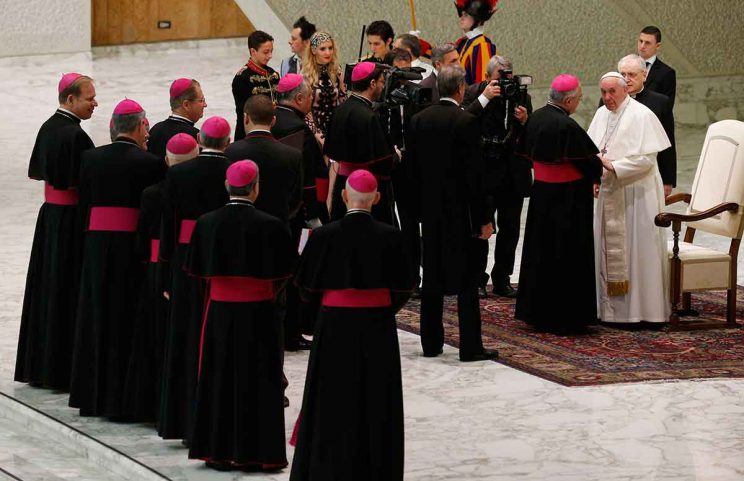 By Mgr Vincent Hill – In response to Pope Francis’ apostolic exhortation on the family, Amoris Laetitia — and specifically the footnote that opens the door for some people in “irregular” marriages to receive Communion — three bishops presented a statement about the “immutable truths” of sacramental marriage, and four cardinals sent a dubia to Pope Francis — and then made sure that the press gave it full coverage.

My Lords and Eminences, this is not “fraternal correction” but a political  tactic known as lobbying, with the aim of creating a pressure group. Their presumption is that Pope Francis’ teaching is opposed to the message of Christ; that he doesn’t know how to be pope.

No Answer for 25 Years

I am a priest of the archdiocese of Pretoria, South Africa; now retired. Being in a mission area, our diocesan tribunal was established only in the 1960s. I was a notary at the time.

To my dismay, I was informed that a case had been referred to us which had been “pending” for 25 years! The reason for delay was that the point at issue involved the African traditional understanding of marriage. Since we had no African priests yet with canon law doctorates, the case had been shelved.

The Church claims to give moral guidance, but when appealed to for an answer on a most urgent point,  the Church had no answer — for 25 years! You want an answer; you need an answer; but you get no answer. What faith that petitioner had, despite it all, to continue believing in the Church!

What about a case where a petitioner is morally certain that the mutual marriage consent was defective — and even the officials of the tribunal agree, internally — but it cannot be proven. No nullity decree can be granted without evidence. Is this not recognised as a problem?

One Standard on All

Of recent years, the “pastoral solution” has been offered. In applying this, it seems the couple is usually told to live “as brother and sister”. How realistic is this?

In the seminary we were given a useful guide for moral choice: “Nemo tenetur ad impossibile”, meaning, “No one is bound to perform the impossible”. And there are degrees of physical or moral impossibility.

Attempts to impose one standard on all can contribute to serious consequences, such as unfaithfulness, alcoholism or violence. I cannot simply turn my back and say: “It’s their problem”.

Canon Law and the Safe Answer

Our canon law is based on Roman law, on contracts and facts: “Is it, or isn’t it?” In offering guidance on moral matters, our canonists tend towards the “safe” answer, as the Pharisees did in biblical times.

Yes, our moral  teaching should be immutable, infallible. But the law which we use to express that teaching may be limited, defective, incomplete (using human concepts and terminology, ignoring  relevant circumstances).

The Church’s teaching on marriage has in fact developed (changed). Jesus stated clearly: “What God has put together, man may not divide.” But within 50 years of Jesus saying that, Paul was dealing with a problem: A pagan woman converts to Christ. Her husband reacts with violence. Must she stay, or be martyred?

Paul says she may leave him and remarry. The explanation — ”it was not a sacramental marriage” — was developed afterwards, and labelled Pauline Privilege.

Later, the popes are found dissolving sacramental marriages which were “not consummated”  – this is called Petrine Privilege.

In the application of the Pauline Privilege, in justice the non-Christian party must be given a chance to accept or reject the spouse’s conversion.

The missionaries to the slaves of Brazil asked the Holy See for guidance, since the interpellations were simply impossible. The popes agreed. A converted slave would be free to marry (or re-marry).

In the above examples, the justification for the change was developed after the papal decision.

Again, to counter grave abuse, the Church imposed new rules, for validity (priest plus two witnesses). These rules did not apply in apostolic times.

Even today,  a couple living in Tristan da Cunha might have to wait more than six months for the next priest to visit the island. They would not be bound by that new rule.

All these are examples of the Church’s power to “bind or loose”.

It seems to me that Pope Francis is simply allowing discussion on a difficult problem — without judgments, condemnations, and neurotic warnings.