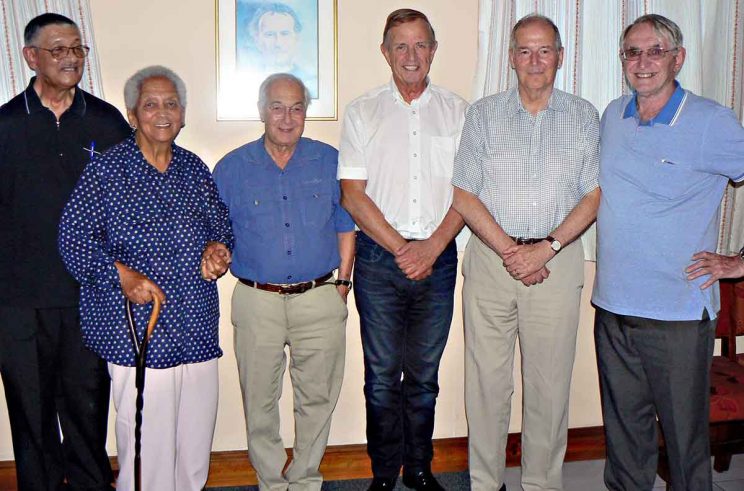 Bursar and former provincial Fr Pat Naughton SDB, at the request of Salesian rector major Fr Angel Artime, presented the medals in the name of the congregation.

Fr Naughton said he had known Ms Perez since 1972 as “the Queen of Our Lady of the Rosary parish in Hanover Park”, where she was honoured with the papal Pro Pontifice et Ecclesia cross for her great work in Justice & Peace.

He thanked her most warmly for three things: her tremendous support for her-then parish priest Fr Pat Lonergan SDB; for having lived the Salesian ethos for so many years; and for having brought Lynn Stevens to the Salesians.

Ms Stevens, he said, had served the Salesian mission with distinction, including a term as chair of the board.

Her expertise in advertising had helped the Salesians to produce annual reports that were the envy of many organisations.

Ms Stevens, who could not attend due to work commitments in Johannesburg, was also responsible for the Department of Education subsidising Learn to Live, a key Salesian project.

Fr Naughton expressed his appreciation for how much he had learnt from Mr Jordan during  meetings and in private contact.

“I appreciated your patience, your detailed knowledge, your experience and wise counsel, your guidance in finance, maintenance and water issues, and in improving the projects.”

Mr Vietri was at the helm of the board when Fr Naughton arrived at the Salesian Institute at Somerset Road. He had previously served with very efficient Salesians in Frs Robert Gore and Fr Eddie O’Neill.

“It took you a while to get used to someone without their gifts,” Fr Naughton said, “but I won you over and we have become great friends. You were a hard taskmaster, but you put us on the right track about how to run an efficient, effective, accountable organisation that could deliver good results. You taught us the value of accurate budgets for NGOs like ourselves.”

He noted that Mr Vietri was educated by the Salesians as a young person in Lansdowne. “He is a very spiritual person and his faith is an example to me.”

Fr Naughton recalled meeting Mr Duval, who had retired after serving on the board for 27 years, when he arrived at Somerset Road 17 years ago.

They got to know each other well through serving on a number of boards together.

“Sydney is a man of great experience and huge vision. It was his vision that formed Youth Unlimited in the archdiocese. He had a wonderful network of people in many countries,” the priest said.

“I had to chuckle when someone said we need to know how to deal with Germans. Sydney has been doing that for nearly 40 years — Missio, Caritas, and Misereor. Even his work in KwaZulu-Natal was based on German funders. He met them and got a lot of money from them for both the archdiocese, the Salesians and Youth Unlimited.”

Fr Naughton noted another lesson from Mr Duval, a veteran journalist: “Sydney introduced us to storytelling.”