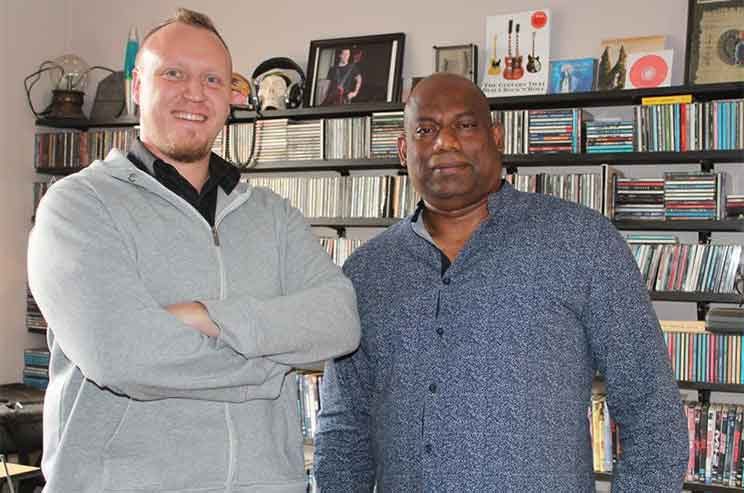 Songwriting pair Ryan Papenfus (left) and Santoro Arikum of Our Lady of Mt Carmel parish in Benoni, Johannesburg diocese, have hit the ground running, with media coverage and CDs of their new hymn ‘Our Lady’.

Ryan Papenfus and Santoro Arikum from the band Candela have created a unique new hymn dedicated to Mother Mary called “Our Lady”. A copy of the song, which has captured the hearts of parishioners both young and old, has been sent to Pope Francis in the hopes of getting it sanctioned in hymn books.

At Mr Arikum’s birthday celebration, Fr Tauro approached him to write a special hymn for the feast of Our Lady of Mount Carmel.

Mr Arikum, who is passionate about songwriting, began to write the very next day and was surprised at how effortlessly the words flowed.

“Within 15 minutes the lyrics were complete. Divine inspiration, if you will,” Mr Arikum said.

He then approached Mr Papenfus, his music teacher, and friend; a songwriter, lyricist, and multi-instrumentalist, to write the music.

Together they decided on a very simple chord progression that could be easily copied and re-interpreted.

“After I made a few lyrical adjustments, the music and vocals pulled together with ease,” Mr Papenfus said. “I quickly sent the acoustic version of the song back to Santoro for his approval. I think he was shocked at how well it had taken shape and at how differently I had interpreted his lyrics.”

This unusual and serendipitous collaboration resulted in the new hymn.

“The song ‘Our Lady’ epitomises the ‘woman of valour’ in the Book of Proverbs. Our goal is to evangelise with positive, uplifting, and illuminating music and lyrics which surpass race, language, age, or religious persuasion,” Mr Papenfus said.

“Our Lady” was officially launched and performed live for the first time at Our Lady of Mount Carmel’s feast day. Mr Arikum’s daughters Shannel and Dalveena, and Mr Papenfus’ young daughter Leah, provided musical backing along with the church choir. Around 100 CDs were sold for charity on the night.

The demand for copies of the song and its sudden popularity drew the attention of local newspapers and the songwriting pair were featured in both the Benoni City Times as well as the Boksburg Advertiser.

“This song has very special meanings for both of us,” Mr Papenfus said, “and is a personal dedication to all women — mothers, sisters, and daughters — who humble us with their patience, as well as a celebration of their power, tenderness, and love.”

After Lockdown, Come out Singing