The History of the Stations of the Cross 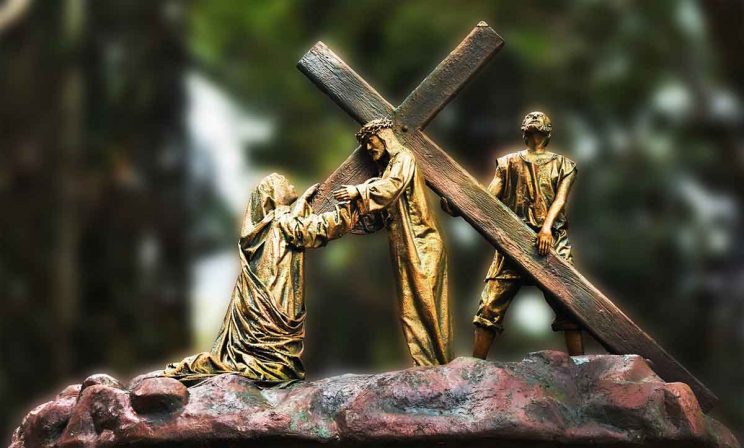 During Lent, the faithful practise the devotion of the Stations of the Cross. Prof MICHAEL OGUNU explains the history and purpose of that devotion.

Stations of the Cross is a devotion, especially during Lent, which prayerfully recalls the last stage of the journey that Jesus walked in his earthly life: from his death sentence by Pontius Pilate until he was taken to Golgotha, to be crucified and then buried in a garden nearby, in a new tomb hewn out of the rock.

This devotion — also known as the Way of the Cross; in Latin as Via Crucis; and in the Holy Land as the Via Dolorosa, or Way of Sorrows — has evolved over time.

Tradition holds that our Blessed Mother visited daily the scenes of our Lord’s passion. After the Roman Emperor Constantine legalised Christianity in the year 313, this pathway was marked with its important stations.

Stations of the Cross Over Time

St Jerome (342-420), who lived in Bethlehem during the later part of his life, attested to the crowds of pilgrims from various countries who visited those holy places, and followed what approximates to the Way of the Cross.

In the 5th century, an interest developed in the Church to “reproduce” the holy places in other areas so pilgrims who could not actually travel to the Holy Land could do so in a devotional, spiritual way in their hearts.

For instance, St Petronius, bishop of Bologna, constructed a group of chapels at the monastery of San Stefano, which depicted the more important shrines of the Holy Land, including several of the stations.

In 1342, the Franciscans were appointed as guardians of the shrines of the Holy Land. The faithful received indulgences for praying at the following stations: at Pilate’s house, where Christ met his mother, where he spoke to the women, where he met Simon of Cyrene, where the soldiers stripped him of his garments, where he was nailed to the cross, and at his tomb (the latter two inside the church of the Holy Sepulchre).

The 14 Stations of the Cross are represented in one artwork in the Catholic Blessed Sacrament chapel in Jerusalem’s church of the Holy Sepulchre, only metres away from the final station: the tomb from which Christ would rise again. (Photos: Günther Simmermacher)

The earliest use of the word “stations”, as applied to the accustomed stopping-places in the Via Sacra (Holy Way) in Jerusalem, occurs in the narrative of an English pilgrim, William Wey, who visited the Holy Land in the mid-15th century and described pilgrims following the footsteps of Christ to the cross.

In 1521 a book entitled Die Geystlich Strass (The Spiritual Road) was printed in Germany with illustrations of the stations in the Holy Land.

When the Turks made access to the Holy Land difficult, reproductions of the stations were erected at popular spiritual centres throughout Europe. Many of these stations were reproduced by renowned artists and are considered masterpieces today.

By 1587, the Italian pilgrim Giovanni Zuallardo reported that the Muslims forbade anyone “to make any halt, nor to pay veneration to the stations with uncovered head, nor to make any other demonstration” — basically suppressing this devotion in the Holy Land.

The devotion continued to grow in popularity in Europe. 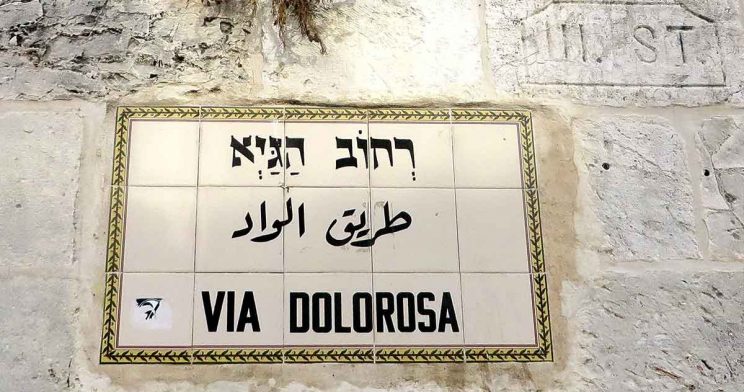 At that time, the number of the stations varied.

William Wey’s account has 14 stations, but only five correspond to the ones we have today. Some versions included the house of Dives (the rich man in the Lazarus story), the city gate through which Christ passed, and the houses of Herod and Simon the Pharisee.

In 1584 a book written by Adrichomius entitled Jerusalem sicut Christi Tempore floruit, gives 12 stations which match those in our present version. The book was translated into several languages and circulated widely.

In the 16th century, devotional books appeared, especially in the Low Countries, which had 14 stations, with prayers for each one.

At the end of the 17th century, the erection of stations in churches became more popular.

In 1686, Pope Innocent XI, realising that few people could travel to the Holy Land, granted the right to erect stations in all churches and that the same indulgences would be given to the Franciscans and those affiliated with them for practising the devotion as if on an actual pilgrimage.

Pope Benedict XIII extended these indulgences to all of the faithful in 1726.

Five years later, Pope Clement XII permitted stations to be created in all churches and fixed the number at 14.

In 1742, Pope Benedict XIV exhorted all priests to enrich their churches with the Stations of the Cross, which must include 14 crosses and usually be accompanied with pictures or images of each particular station.

The popularity of the devotion was also encouraged by preachers like St Leonard Casanova of Porto Maurizio (1676-1751), who reportedly erected over 600 sets of stations throughout Italy.

Some modern liturgists say the traditional Stations of the Cross are incomplete without a final scene: depicting the empty tomb and/or the resurrection of Jesus, because Jesus’ rising from the dead was an integral part of his salvific work on earth.

Advocates of the traditional form of the Stations, ending with the body of Jesus being placed in the tomb, say the Stations are intended as a meditation on the atoning death of Jesus, and not as a complete picture of his life, death and resurrection.

There are the Stations of the Resurrection (also known by the Latin name of Via Lucis) which are used in some churches at Eastertide to meditate on the Resurrection and Ascension of Jesus Christ.

The Southern Cross followed the Via Lucis in text and pictures last year (see www.scross.co.za/category/via-lucis). 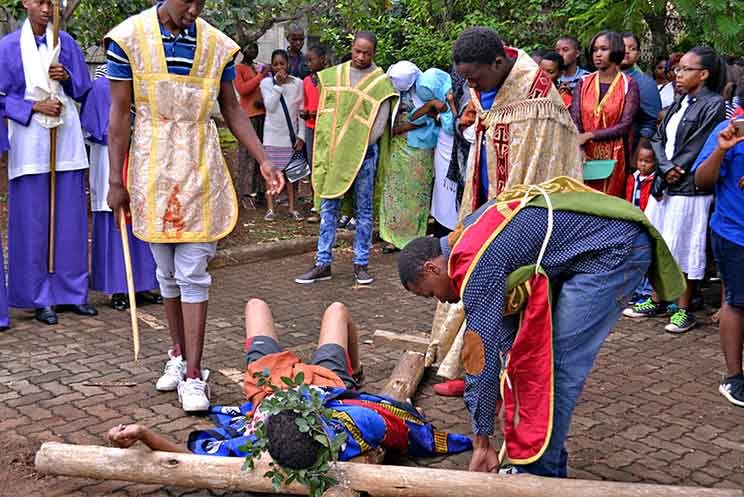 Catholics in Swaziland re-enact the Passion of Christ during Holy Week. The events of the Passion following Jesus’ condemnation by Pontius Pilate are encapsulated in the 14 Stations of the Cross. (Photo: Bishop José Luis Ponce de León IMC)

Why do the Stations?

The object of the Stations of the Cross is to help the faithful to make a spiritual pilgrimage of prayer, through meditating upon the chief scenes of Christ’s sufferings and death.

It has become one of the most popular devotions for Catholics, and is often performed in a spirit of reparation for the sufferings and insults that Jesus endured during his Passion.

In his encyclical letter Miserentissimus Redemptor, on reparations, Pope Pius XI called Acts of Reparation to Jesus Christ a duty for Catholics and referred to them as “some sort of compensation to be rendered for the injury” with respect to the sufferings of Jesus.

Pope John Paul II referred to Acts of Reparation as the “unceasing effort to stand beside the endless crosses on which the Son of God continues to be crucified”.

A plenary indulgence is granted to the faithful who make the pious exercise of the Way of the Cross (Stations of the Cross).

The gaining of the plenary indulgence is regulated by the following norms:

However, nothing more is required than a pious meditation on the Passion and Death of the Lord, which need not be a particular consideration of the individual mysteries of the stations.

Those who are “impeded” can gain the same indulgence if they spend at least one half an hour in pious reading and meditation on the Passion and Death of our Lord Jesus Christ.

Why the Earth Trembled and All Went Dark