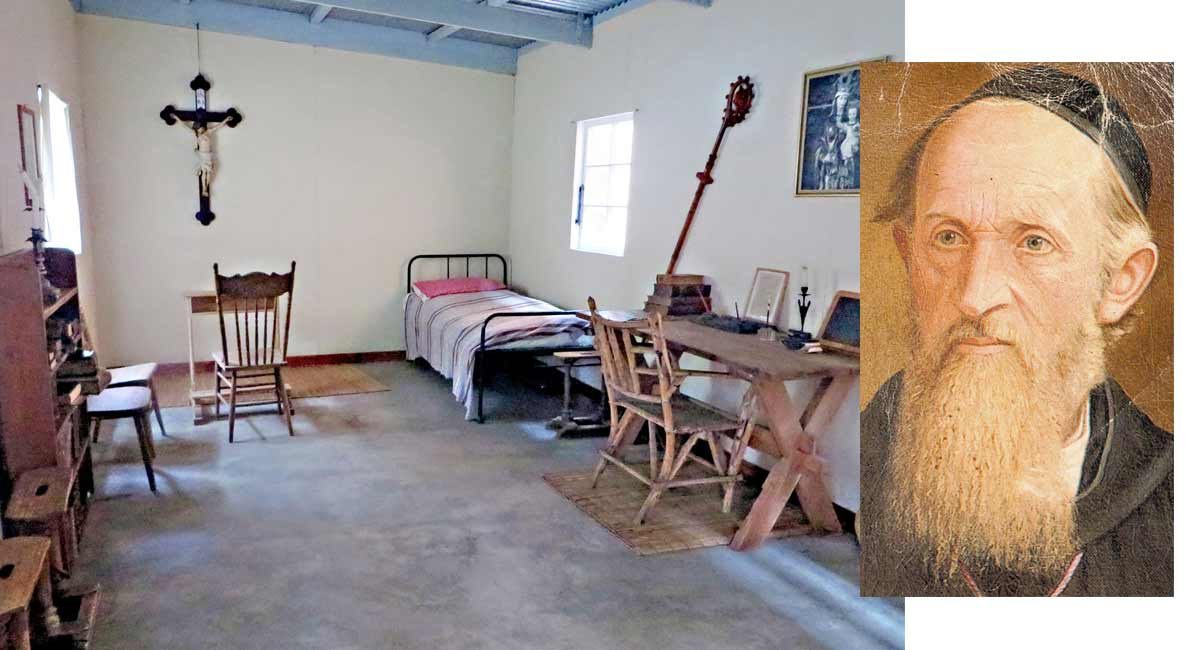 The room of Abbot Franz Pfanner, who is pictured right, is preserved at Mariannhill monastery, near Durban. (Photo: Günther Simmermacher)

One of the defining moments in the growth of the Catholic Church of South Africa was the arrival of Abbot Franz Pfanner and his Trappist monks. NICKI VON DER HEYDE tells the story of the man born as Wendolin Pfanner.

At the turn of the last century a remarkable phenomenon occurred among the rolling foot-hills of rural Natal: a series of magnificent, neo-Gothic churches materialised, as if by magic, in rural environments where neighbouring dwellings were mostly simple, thatched huts.

The towering spires of these European churches marked the astonishingly rapid spread of Trappist mission stations, founded by monks of the silent order.

How this came about, is a triumphant and at the same time tragic story that has at its centre the personality of one exceptional man: Abbot Francis Pfanner.

Born in 1825 as Wendolin Pfanner to a farming family in Austria, he was one of twins, endowed with red hair and a strong personality.

Being a sturdy lad, he was the acknowledged champion of a form of wrestling called Hosenlupf. He also enjoyed practical jokes and was leader of the village gang.

However, as far as farm work was concerned, he was impatient and hasty, knocking over milking pails and spilling trailer-loads of sand.

His twin brother, Johann, seemed better suited to farming than Wendolin, who was consequently sent off to grammar school to acquire an education. Being a clever and studious boy, he excelled in his studies and went on to university.

His academic record was so good that he went on to do a post-graduate course in philosophy at a university in Padua in northern Italy. However, while he was in Italy, he fell ill with pneumonia and meningitis. Forced to interrupt his studies, he recovered his health in a sanatorium.

It was while he was there that he felt a calling to mission work. However, his weak lungs would seem to preclude the mission fields for the time being.

He studied to become a priest and was ordained at the age of 25. He was given a difficult parish to administer. He poured all his prodigious energy into the task and was very successful, although his lungs were still weak from his illness.

His fiery personality and boundless drive fed in him a growing passion for Christian outreach; however, when he requested the bishop to send him to the mission fields, the bishop refused, believing Pfanner’s health not sufficiently robust.

Instead he sent him to oversee a convent of nuns in Croatia. The young priest soon gained their admiration and support but, while he was there, he again suffered a bout of illness, and had to spend time recuperating.

After this, he approached the bishop with a singular request. He wished to join the Trappist order.

He reasoned that his ill health would lead to an early death, and desired to prepare himself for the afterlife. The best preparation would surely come from spending time in the strictest religious order, that of the Trappists.

This was a strange request from a priest who was passionate for outreach and evangelisation. The Trappist monks were contemplative; speaking was discouraged, and the preparation of the soul for the afterlife was their primary focus.

This was surely not compatible with missionary outreach. But Wendolin Pfanner’s choice stemmed from his conviction that he did not have much longer to live.

The bishop kept Pfanner waiting a long time for his reply, no doubt believing the priest would change his mind. When Pfanner remained obdurate, he was sent to join the Trappist Mariawald monastery in western Germany.

Wendolin took the religious name of Franz, the German form of Francis.

He embraced the Trappist lifestyle with enthusiasm, throwing himself whole-heartedly into hard physical labour. His favourite pastime was chopping wood. It seems that the vegetarian diet and hours of exercise strengthened his previously weak constitution, and he became a strong and healthy man, full of energy and devoted to hard work.

It wasn’t long before he was chivvying the monks who didn’t work hard enough, and this made him unpopular. Complaints against him resulted in his being sent away from Mariawald and told that he should go and establish his own Trappist monastery elsewhere in Europe.

Franz Pfanner visited Rome and the Holy Land before he finally established a new mission station near Banja-Luka in Bosnia. He named it Mariastern (Star of Mary).

He supervised the building of a mill and a fruit-drying plant; bridges and roads were constructed; a school and orphanage followed.

Building operations were hampered by the fact that materials needed for construction had to pass through customs.

Apart from the delays this caused, customs refused to let bells come into the country at all, because bells were forbidden in Bosnia.  However, as the Trappists were not allowed to speak, the tolling of bells governed their timetable and were indispensable. Pfanner solved the problem by smuggling them in, concealed in wine casks.

Throughout his life he would refuse to allow man-made rules to obstruct his love of God and his calling.

Because monks were not permitted any contact with females, they could not teach or work in the co-educational school or orphanage at Mariastern. Pfanner managed the problem by bringing in convent Sisters to teach at the school and work in the orphanage. They proved a great success and Franz was later to adopt the same strategy at Mariannhill mission in South Africa.

His converts and congregation at Mariastern grew at such a rate that he had to buy up more land to grow crops, as it was imperative that the monastery produce enough food for all — an important Trappist principle was that of self-sufficiency.

Sadly, the extension of monastery land caused conflict, because Bosnians living on neighbouring properties complained about the frequent tolling of the bells, which were needed to announce set times of work or contemplation. Objections were sent to the bishop who instructed Franz to “curb his unruly spirit” and to limit further development.

However, it could not be denied that Mariastern monastery was a great success, and it transpired that Franz Pfanner was to be proclaimed an abbot.

This would have meant a life of comparative ease, but it was not what Franz wanted; his heart remained devoted to outreach and mission work.

It was at this juncture in his career that an event occurred that would change his life — and those of countless others.

At a chapter meeting of the order, Bishop James David Ricards, of the Eastern vicariate in South Africa made an unusual request: he sought a group of monks to open a mission station at Dunbrody, near the Sundays River in the Eastern Cape. Abbot Pfanner, to the amazement of all those present, offered to go, with the famous words: “If no one will go, I will go.”

Travel arrangements were concluded and shortly afterwards Abbot Pfanner, a group of monks and a printing press left by ship for Africa.

Franz was miserably seasick the whole way, arriving emaciated and hollow-eyed. His condition was not improved by the sight of the land on which he was to build his station. It was arid, drought-stricken and barren.

Nonetheless the monks started work with vigour, clearing the thorn bush and planting crops to achieve the Trappist goal of self-sufficiency.

When increasing amounts of money were needed for equipment and materials, Pfanner printed brochures with photographs of progress made, and sent them to Europe to raise funds.

He also went to Europe himself, on fund-raising tours. He would travel from town to town in an open cart, eating only bread and fruit, and give such humorous, witty and charismatic speeches that his audiences donated generously.

But sadly, the drought in the Cape persisted, locusts destroyed the little food the monks managed to cultivate, and it was clear that the project was doomed to fail.

The move to Natal

Determined to remain in Africa, Pfanner wrote to the bishop of Natal to ask if he might relocate his mission from the Eastern Cape to well-watered Natal. Bishop Jolivet agreed, planning to settle the Trappists on an abandoned mission station near Umzinto, on the south coast.

Fortunately for Pfanner, he heard from a prominent Natal businessman that faction-fighting among those living in that area would make it untenable for mission work. Pfanner looked around for a suitable farm to buy instead.

Fortuitously, there was a farmer close to Pinetown whose land was up for sale; he owned fertile fields on the banks of the Umhlatazana river. Pfanner’s offer for the farm was accepted, and he lost no time in moving his monks, printing press and other equipment to Pinetown by rail, and then to the new farm by ox-wagon. He arrived in December 1882.

The success of the Trappists at Mariannhill monastery soon became legendary. Their motto —”Work and Prayer”— reflected their Benedictine origins; and their way of living produced wonderful results.

The monastery, with a farm and workshops, was in the heart of a rural community, and the people around learned by example from the Brothers.

The monks did all the hard, physical labour themselves and in this way taught farming methods and technical skills.

Before long the school engendered well-educated young Blacks, many of them skilled in the trades of wagon-building, carpentry, ironwork, book-binding, tanning, leatherwork, barrel-making, printing, tailoring, candle-making and more.

Read part 2 in this series

Nicki von der Heyde’s book Triumph and Tragedy: Trappist Missions in South Africa, with more than 200 historic and modern photographs, will be published later this month. To order, contact the author at nicki@campaigntrails.co.za