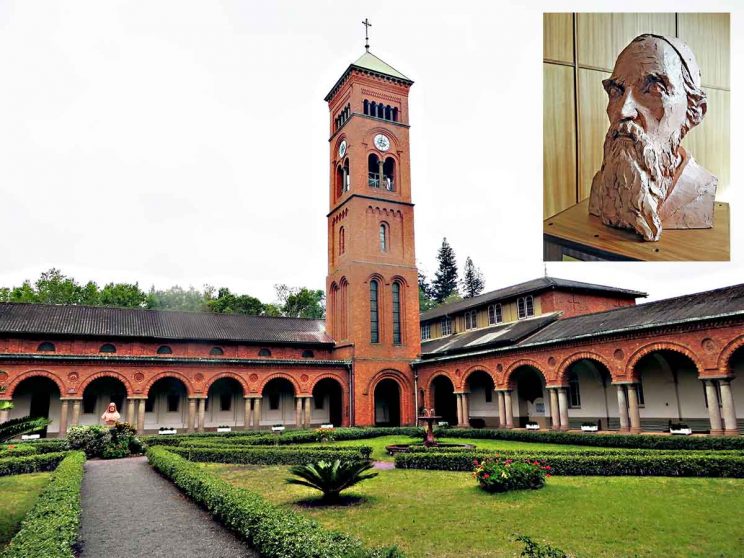 Mariannhill monastery, near Durban, today. It was founded by Abbot Franz Pfanner (inset: bust in the monastery’s provincial house)

In part one of this series. NICKI VON DER HEYDE told the story of how Abbot Franz Pfanner and his Trappists came to Mariannhill near Durban. This week we read how the monastery and its monks became a whole new religious congregation.

In only three years Francis Pfanner had become world-famous. In 1885 Mariannhill was given the status of an abbey, and Pfanner was consecrated its first mitred abbot. The abbot was passionate about spreading the benefits of education and Christianity further afield. Soon a network of mission churches sprang up through southern Natal, each on farmland that was sufficient to feed its congregants.

Pfanner’s education policies were controversial at the time, as he believed firmly that schooling should be completely non-racial.

“All boys in our institute receive free bed, board, and instruction, regardless of whether they are pagan, Muslim, Protestant, or Catholic, white, black, or coloured, English, Dutch, German, Italian, Indian, or local African,” he said.

And in his 1890 Principles for Mission he declared that Mariannhill’s aim was “to pursue and bring about an equal status for black and white people”.

In 1887 he sent the first young men to Rome to study for the priesthood and the very first Zulu Catholic priest came from Mariannhill.

All these achievements were publicised in regular newsletters, diaries and pamphlets, illustrated with high-quality photographs.

The European recipients of these bulletins responded with generous donations that were used to extend Mariannhill’s missionary activities.

However, within his very successes were seeds of tragedy, as the noble ideals of Christian outreach and education proved increasingly incompatible with the equally noble ideals of prayer and contemplation, intrinsic to the Trappist order.

Pfanner had always rejected the idea that monks should not take on mission work, saying that the first monks in Europe were all evangelists who built monasteries and created stable social structures, essential for a viable Church.

However, the Trappists found it increasingly difficult to reconcile missionary activity with the strict monastic rules of the Trappist order.

For one thing, the hours of contemplation and the meagre vegetarian diet reduced the ability of working Brothers to accomplish the necessary physical tasks.

For another, the monks were not allowed any contact with women and so religious Sisters had to be brought in to help in the schools.

Produce from Mariannhill was used to support them in contravention of the rules. Abbot Pfanner requested in vain for the rules to be changed, arguing that “there is greater joy in heaven over one converted and baptised Zulugirl [sic] than over 99 Trappists assembled in the monastery chapel, having no need of baptism”.

Breaking the Rules – for a Good Cause

Another disobedience to the rule was the growing number of novices teaching at the outlying missions. This was necessary as there were not enough Brothers who could speak Zulu. But the Trappist rule forbade novices to lodge away from the mother house.

Pfanner had also granted an ever-increasing number of dispensations to the Brothers, so that more work could be done. Amidst growing disapproval from contemplative monks, he resorted to saying that Mariannhill — by now one of the largest Christian monasteries in the world — was not a mission but merely a base for missionary activity.

Complaints against Abbot Pfanner were received by the order in Rome. In 1891, Pfanner was called to Rome to answer accusations of money-wasting, granting dispensations without permission, insufficient care for Trappist spiritual welfare, and for neglecting to insist on modest behaviour of the Sisters.

He responded by urging the capitulars to come and view his operations at Mariannhill and at the outlying stations, so that they could understand why such dispensations had been unavoidable.

An inspection was arranged, and Abbot Pfanner told to remove himself during the visit, either to Rome or to an outstation; he was strictly forbidden any involvement in any of the monasteries during his suspension. This banishment was intended as a penance, and he was supposed to repent during his absence.

The suspension lasted for a year, during which time Abbot Amandus Scholzig administered the abbey.

Pfanner had stated that he would either move to Lourdes monastery in south-eastern KwaZulu-Natal, or to Lebanon. The authorities forbade the latter choice, fearing many monks would go with him, and so Pfanner saw his year out at Lourdes, visiting the missions of Einsiedeln and Reichenau on his way there.  He wrote a letter of resignation, but it was not accepted by the order.

The visitator, Franciscus Strunk, the abbot of the Trappist monastery of Oelenberg in Alsace, meanwhile reversed all the dispensations that had been granted at Mariannhill, put a stop to outreach, and created bitter strife between the opposing factions at the Mariannhill.

After his year’s suspension was over, Pfanner heard nothing further from the authorities and, after consideration, assumed that his resignation had been accepted.

He requested part of Lourdes’ huge estate on which to live and grow his own food. His request was granted and, in 1893, he moved from Lourdes to this piece of land, where he carved out a productive farm. He was nearly 70.

Four years before his death he drafted a statute for a new missionary society that would be directly responsible to Rome and would adopt from the Trappist Order only the rules that were compatible with mission work.

The draft was initially put on hold, although the Mariannhill community was strongly in favour of it.

Eventually, in February 1909, the separation of the Mariannhill Missions from the Trappist Order was approved by Pope Pius X (who in 1906 had approved the constitutions of the Missionary Sisters of the Precious Blood, which Pfanner had founded in 1885), and this ensured that Pfanner’s missionary work could continue.

Abbot Pfanner died in peace, in May of that year at Emaus mission, at the age of 84.

Today, there are missions established by Mariannhill throughout the world, true to Franz Pfanner’s declaration that his work should be like Christ’s kingdom, and have no frontiers.

Nicki von der Heyde’s book Triumph and Tragedy: Trappist Monasteries in South Africa, with more than 200 historic and modern photographs, will be published later this month. To order, contact the author at nicki@campaigntrails.co.za