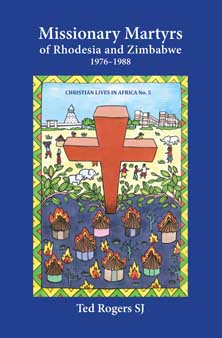 The late Fr Ted Rogers deserves credit for having taken a bold step to acknowledge the missionaries who were killed during the Rhodesian/Zimbabwean war of independence.

The Catholic Church paid a heavy price when its priests, Sisters, Brothers, doctors and laypeople were killed while serving the Church in the midst of a war.

Fr Rogers narrates the 1964-79 war that killed around 40000 people, mostly civilians. Most of the killings of missionaries took place from 1976 to December 1979 when the war was at its highest intensity.

Most of these were committed by the guerrilla forces whose primary target was the “white race”. The missionaries who had decided to stay in the rural missions were easily targeted.

Fr Rogers also raises the important point that some missionaries might have been killed by the Selous Scouts, the Rhodesian special force which used to enter the rural areas and pretend to be guerrillas to extract information from the locals. Fr Rogers makes it clear that the debate about who actually killed some of the missionaries is still open.

People in the Middle

The missionaries found themselves as “people in the middle”. They were blamed by the guerrillas for being “white” and their religion was seen as the “opium of the people”. On the other side, the white regime blamed them for supporting the guerrillas, and for being the “lovers of African people” and “betrayers of the white supremacy thinking and values”.

Fr Rogers’ book documents the contribution of the Catholic Church to the armed struggle. It acknowledges the spirit of the missionaries of yesteryear: “Those who chose to stay with their people and to be there in their suffering.” The book presents a Church in the site of the struggle, not as a commentator but as a participant.

In writing this book, the author has acknowledged the contributions of many religious, priests, lay missionaries, doctors and catechists to the growing of the faith of Zimbabwe. This book underscores the faithfulness of the Catholic Church to offer one’s life for others fully.

Debatable as it may be, this book breaks down the barriers of monopolising the liberation struggle which seem to suggest that the only heroes are those armed men and women who died in war. It puts the Church, especially the martyrs on the same rank as the honoured war veterans of the Zimbabwean liberation war.

Fr Rogers gives a fair analysis of the Church. He points out in his book that there were two kinds of the Catholic Church in the colonial days: The settlers’ Church and the mission Church

The martyrs belonged to the mission Church which was prophetic and at times challenged white privilege. We had religious, lay missionaries and priests who were found on both sides of the fence. The image of the divided Church of Zimbabwe needs to be further interrogated in the present situation.

Possible new insights and debates that can be drawn: What was the contribution of the Catholic Church in the struggle for liberation of Zimbabwe? How has the Church handled itself after independence? Has it been faithful to the spirit of the martyrs? What was the role of ordinary Catholics in the preservation of the churches and its missionaries during the war? Why is there a lack of honouring the Zimbabwean martyrs in today’s Church in the country?

The Zimbabwean story of liberation has many facets and many stories are still to be told. The martyrs of Rhodesia/Zimbabwe should be accorded a special place in the history of Zimbabwe and in Zimbabwe Church history.

Fr Rogers’ book opens up a conversation about how Zimbabwean history has been told and how the Catholic Church’s role has been negated to the periphery.