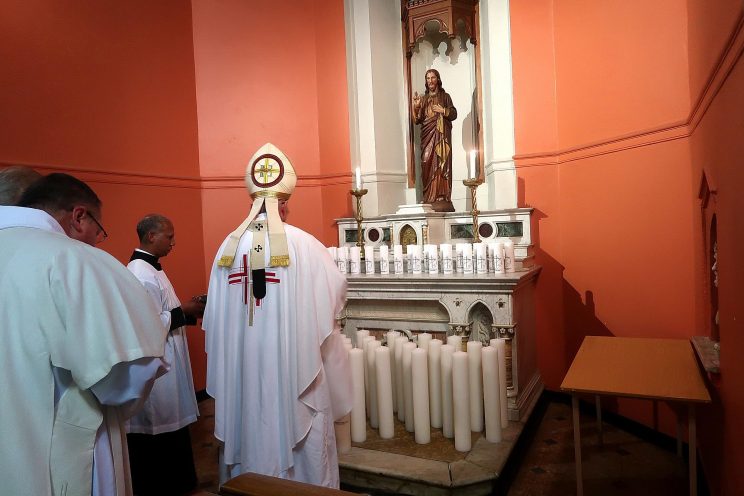 Archbishop Brislin blesses the bicentennial candles that will be given to each diocese to be lit next June to celebrate the 200th anniversary of the Catholic Church in SA.

As part of the bicentennial celebrations of the Catholic Church in South Africa, the archdiocese of Cape Town will host a Mass dedicated to missionaries in May.

“Countless missionaries, both men, and women, left their countries, families and friends, with immense dedication and sacrifice, to answer the mission-calling of the Church and came to Southern Africa, and it is, therefore, appropriate that we remember that our Catholic faith has been brought to us by them,” said Archbishop Stephen Brislin of Cape Town.

“The words of Jesus, ‘Go, therefore, and make disciples of all the nations’ (Mt 28:19), became their motivation to leave everything behind for the kingdom of God. Some of our earlier missionaries left their shores with the understanding that they might never return home, and even some of them died young because of the harsh climate awaiting them in Africa,” he said.
The archdiocese of Cape Town is blessed by the presence and ministry of a large number of missionaries, including Fidei Domum priests, from countries around the world. The early missionaries made many contributions in building churches, schools, and hospitals.

“Due to their selfless efforts, many of these institutions became the backbone of the Church in Southern Africa and society in general,” Archbishop Brislin said. “It is these men and women that we wish to honour, celebrate and show our appreciation to.”

For more information contact Fr Ivanhoe Allies on 021 558-1412/ 079 154-6919 or Vic Barra, chair of the parish pastoral council, on 083 308-4014.
The highlight of the bicentennial celebrations in the archdiocese of Cape Town will be the closing Mass on June 24 in Coetzenburg, Stellenbosch. Further details will follow closer to the time.