In the second of his three articles on ten places where we find Mary in the Holy Land, GÜNTHER SIMMERMACHER guides us to the Temple in Jerusalem, the wedding feast in Cana, and through Mary’s sorrow as her Son is crucified.

Last week we followed the first four stations in the recorded life of the Blessed Virgin Mary: her birthplace in Jerusalem, her residence in Nazareth and the Annunciation, the place in the Judean hill country where she visited her cousin St Elizabeth, and the spot in Bethlehem where she gave birth.

All these places, and those that follow, are marked with churches and shrines in the Holy Land. A pilgrimage to Israel and Palestine gives our image of Mary context as a woman of flesh and blood. A Holy Land pilgrimage is a journey to the real Mary (and more so, of course, to the real Jesus).

Here are the next three of the ten stations of the Blessed Virgin’s life in the Holy Land. 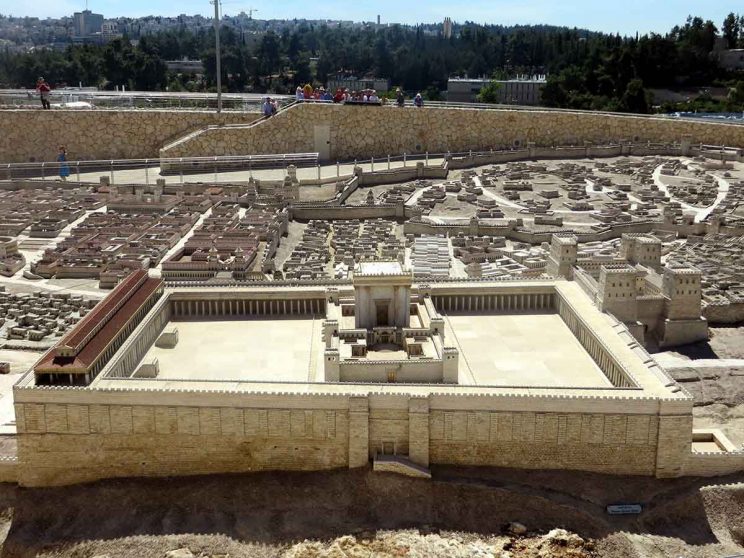 A model of the Temple in Jerusalem. (All photos: Günther Simmermacher)

The Temple of Jerusalem

In Jesus’ time, the Jewish year in Palestine was dominated by the pilgrimages Jews were obliged to make to the Temple in Jerusalem.

Typically, those making these pilgrimages from Galilee would travel over three days or so in large groups, to guard against attacks by robbers such as those Jesus tells us about in the Parable of the Good Samaritan.

Samaritans were the sworn enemies of the Jews, and to bypass their land, the Jews of Galilee had to make a detour, using exactly the road Jesus described in the parable (pilgrims can see the rocky desert terrain as it was even today).

On one such Temple pilgrimage, maybe around the year 7 AD, the caravan was already a day into the journey home when Mary and Joseph noticed that their son was not with them.

We mustn’t think of them as negligent parents. These large caravans were populated with neighbours and possibly also relatives. They likely thought that Jesus was hanging out with friends; maybe that’s what he always did.

But when they couldn’t find the boy, they flew into the choking panic any parent who has ever misplaced a child will recognise. We know how the story ends: they find Jesus chewing the theological fat on the steps of the Temple.

Reprimanded by his parents, the precocious 12-year-old even gives them some lip. Like any kid of that age, young Jesus hadn’t thought things through. His parents had to traverse the dangerous road back to Jerusalem without the safety of strength in numbers, and would have to make their way home facing the threat of robbers. Or maybe Jesus knew that his Father would not expose the Holy Family to any danger…

Most likely, Jesus was sitting on the steps on the southern side of the Temple, which still exist today. While these steps are not freely accessible to normal pilgrims, one can nonetheless see them. 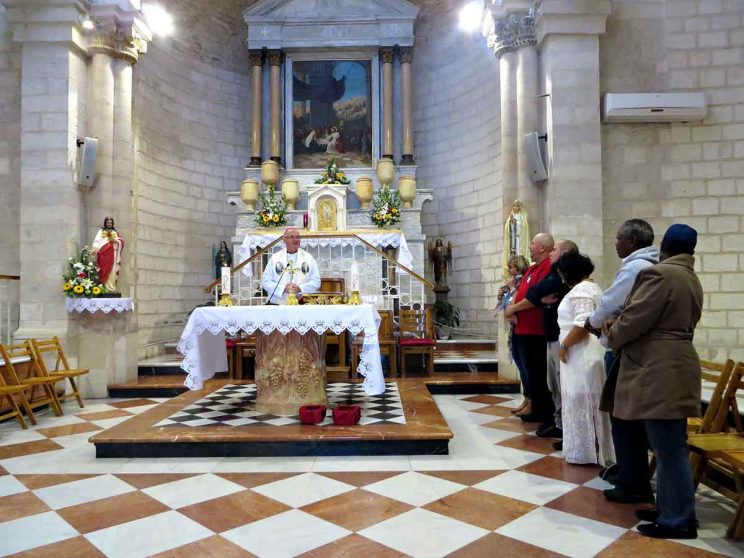 Renewal of wedding vows in Cana

By the time the most famous wedding in history takes place, Joseph has died.

The Gospel doesn’t reveal the identity of the happy couple, but Mary and Jesus must have known them well — Cana is just a couple of kilometres from Nazareth. Indeed, they were so familiar with the couple that Jesus felt at ease to bring along his new band of followers, and that Mary was close enough to the family to do something about it when the wine ran out.

The story is dramatic in its own right, of course. So it is often forgotten just what sacrifice Mary is making. When Jesus is telling her that his time has not yet come, he’s not referring to his busy diary. He knows and Mary knows that by revealing Jesus’ extraordinary powers, they are inaugurating the path that would lead to the heartbreak of the crucifixion at Golgotha.

Mary knows the prophecy of her Son’s fate. At the Presentation in the Temple, Simeon had told her that “a sword will pierce your own soul, too” (Lk 2:32). And still she instructs her Son. So Mary’s act of mercy for the hapless wedding hosts comes at a grave, ultimately tormenting sacrifice.

Still, the Franciscan Wedding church in Cana tends to be a place of joy, for here married couples can renew their wedding vows.

When the Franciscans built the present church there over a hundred years ago, they found evidence of an early Christian synagogue, with inscriptions, as well as the remains of a later basilica and domestic dwellings. These, as well as ancient pilgrim texts, show that the early Christians commemorated the wedding miracle at this spot. 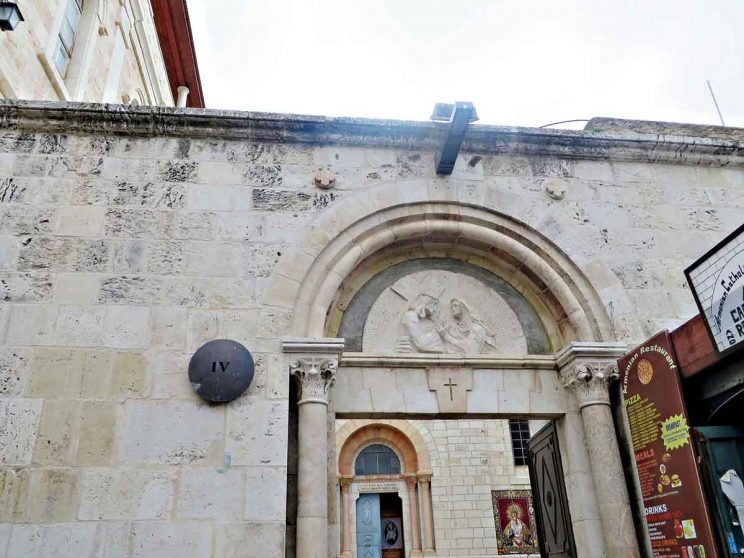 The Passion in Jerusalem

We know very little about Mary in the time of Jesus’ public ministry, neither from the gospels nor from credible tradition. The next time we encounter her, the terrible events which had as their prelude the miracle at Cana were unfolding.

By now, Jesus has been betrayed, arrested, tried, convicted and sentenced to be crucified. He has been flogged to within an inch of his life and tormented with the crown of thorns. Now he is carrying the crossbeam through the streets of Jerusalem to Golgotha.

That route is known as the Way of Sorrow, or the Via Dolorosa (what we call the Stations of the Cross). Much of the way through Jerusalem’s busy Old City market bears as its official street name “Via Dolorosa”. Station IV commemorates Jesus meeting his mother, marked by the Armenian Catholic church of Our Lady of the Spasm.

The Gospel recounts that Jesus entrusted his mother to the disciple John (Jn 19:26). It places that instruction as having been issued as Jesus hung on the cross, but some scholars suggest that it makes more sense that it took place as Jesus was on his way to Golgotha. 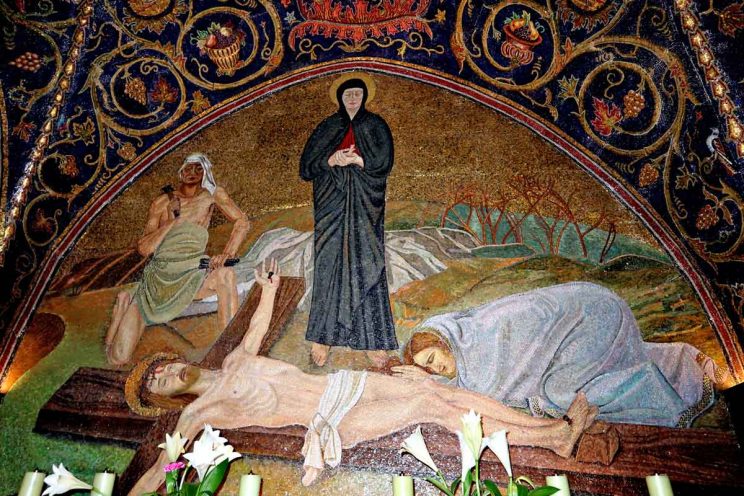 A mosaic above the altar of the Catholic chapel on Calvary in the church of the Holy Sepulchre.

We encounter Mary again at Golgotha (or Calvary), which is now covered by the church of the Holy Sepulchre, the most sacred site in our faith.

The historical and archaeological evidence that this church is the site of the crucifixion and burial of Christ (and therefore also of his Resurrection) is so compelling as to eliminate any reasonable doubt.

In that church, first consecrated in 335 and rebuilt by the Crusaders in the early 1100s, we encounter Mary at Calvary. We see her in a mosaic above the altar of the Catholic chapel, watching over her Son as he is nailed to the cross.

She is in the adjacent chapel of Calvary, on the Orthodox altar below which pilgrims bend to put their hands on the rock on which the Cross stood.

In between the two open-plan chapels, easy to miss, is the tiny Catholic altar of Our Lady of Sorrows. 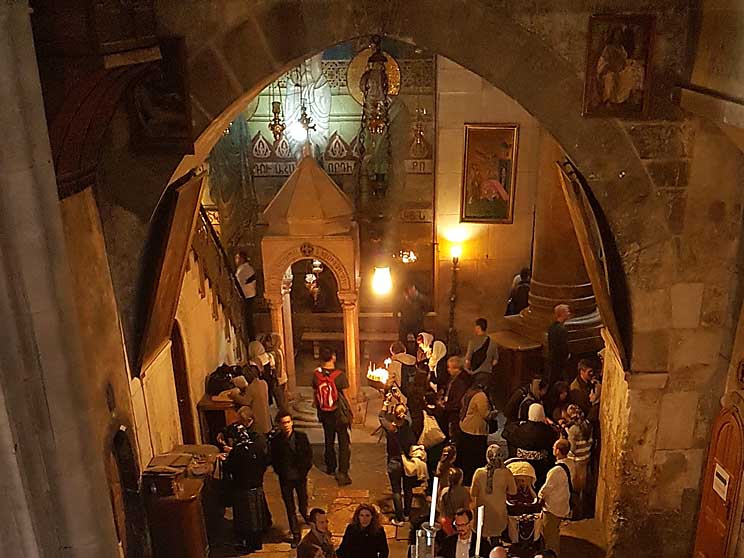 The Chapel of the Marys is seen from Calvary in the Church of the Holy Sepulchre in Jerusalem. It commemorates the spot where the grieving women stood as Jesus died on the cross. To the right is the entrance to the rotunda, with the tomb of Christ’s Resurrection.

But it is quite likely that mourners were not allowed to be as close to the act of crucifixion as these depictions and popular devotions suggest. Alone as a security measure, the Romans surely couldn’t allow that. The synoptic gospels reflect that, and have the group of mourning women, including Jesus’ Mother, standing at a distance.

A small chapel in the entrance hall of the church of the Holy Sepulchre acknowledges that. The Chapel of the Marys is an unassuming canopy which is usually overlooked, at the putative spot where the women stood, looking up at the outcrop of Calvary, with the tomb to their left on the ground level.

The gospels leave Mary grieving for her Son; they make no further mention of her. On the third day Mary Magdalene returned to the scene of that heartbreak, arriving at the tomb, just a few metres from the Chapel of the Marys. We know what she found.

Where was the Blessed Virgin that morning? Where is she in the story of the Risen Christ?

She probably already knew that her Son had risen. Surely the first thing the risen Christ would have done was to seek out his mother, to console her and to let her be the first recipient of the news of the Resurrection. St John Paul II once asked the reasonable question: “Couldn’t the absence of Mary from the group of women who approached the tomb at dawn constitute an indication that she had already met Jesus?”

The evangelists don’t feature Mary in the post-Resurrection narrative, but she returns in the Acts of the Apostles, in the Upper Room as the Holy Spirit descended upon them on Pentecost. We will visit that place and the shrines of Our Lady’s dormition and assumption next week.

Günther Simmermacher is the author of The Holy Land Trek: A Pilgrim’s Guide, now in its second edition.