In the final of his three articles on sites of the life of the Blessed Virgin Mary in the Holy Land, GÜNTHER SIMMERMACHER visits the places in Jerusalem where the Church was ‘born’, where Mary fell into eternal sleep, and from where she was assumed into heaven. 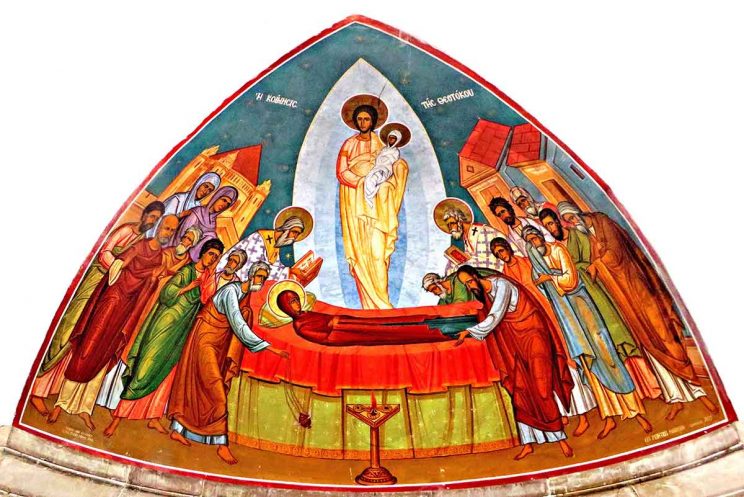 A mural in Dormition abbey on Mount Zion depicts Jesus receiving his mother, wrapped in swaddling cloths, in heaven, as the Apostles stand around the tomb with Mary’s lifeless body. (All photos: Günther Simmermacher)

In the first part of this series we visited the places in the Holy Land that mark the birth of the Blessed Virgin Mary in Jerusalem, her residence in Nazareth and the Annunciation, her visit to cousin St Elizabeth in Judea, and the place in Bethlehem where she gave birth to the Saviour. Last week we encountered her on the still-existing steps of the Temple, at the wedding in Cana, on the Via Dolorosa, and at the Cross.

We conclude our virtual pilgrimage at the location of the first Pentecost, the place where she shut her eyes for the final time, and the tomb from which she was assumed into heaven.

But before we depart, there is one place where we don’t specifically remember Mary but can almost certainly place her.

Next to the church of St Peter in Gallicantu, the site of the high priest’s palace on Mount Zion, is a run of steps which were there in Jesus’ time. There can be no doubt that Jesus walked on these steps on his way from and to the Mount of Olives, as did the Apostles. It’s more than likely that Mary walked on those steps as well. 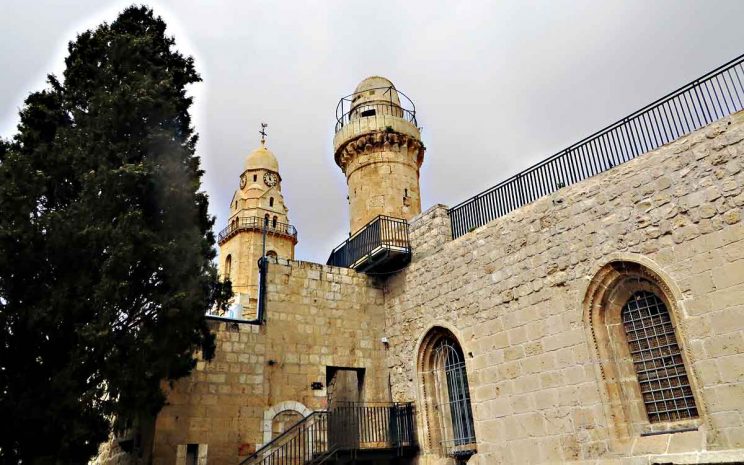 A minaret on the Cenacle, site of the Upper Room, on Mount Zion, with the tower of Dormition abbey in the background.

The agent in our hope of salvation is the Church. One can quibble about the precise moment when the Christian Church was “born”.

Leaving aside those views which rely on historical timelines of the institution of structures, offices and so on, there are two contenders: the moment the risen Christ issued his commission to the Apostles on the Sea of Galilee (marked by the church of St Peter’s Primacy at Tabgha) and the descent of the Holy Spirit at Pentecost.

The event at Pentecost took place in the Upper Room on Mount Zion. It was a regular meeting place for the disciples in Jerusalem.

Most famously, it was the venue for the Last Supper, at which Mary was not present. Two world-changing days later, it is where most of the Twelve (now down to 11) were in hiding that first Easter Sunday, when the Risen Lord appeared to them.

That place likely was the Apostles’ headquarters in Jerusalem during the 49 days that followed, and beyond. This would be why the Apostles and disciples, including Mary, were congregated there when the Holy Spirit descended upon them.

The late Benedictine Father Bargil Pixner, an eminent (though not uncontroversial) scholar of the Holy Land, suggested that the Upper Room was on the second floor of a guesthouse on Mount Zion, owned by members of the Essenes, the Jewish sect to which we owe the Dead Sea Scrolls. Fr Pixner proposed that the Holy Family were themselves Essenes, as was John the Baptist.

The building of that guesthouse is long gone. The Last Supper and Pentecost are commemorated in a Crusader chapel commonly called the Cenacle, the surviving remnant of a larger church dedicated to Our Lady, which was later converted to a mosque.

Few experts are willing to stick their neck out and proclaim it the authentic site of the Last Supper and first Pentecost. But archaeologists have found an ancient pavement beneath the complex that houses the Cenacle. Into one piece of plaster, an ancient pilgrim etched the prayer: “O Jesus, that I may live…”.

More than that, the archaeologists also found the remains of what appears to be a first-century house church. This could be “the little church of God” which Epiphanius of Salamis reported as having visited in 130 AD.

This would place the institution of the Eucharist and the birth of the Church right there, and it therefore would be Christendom’s second-most holy site. 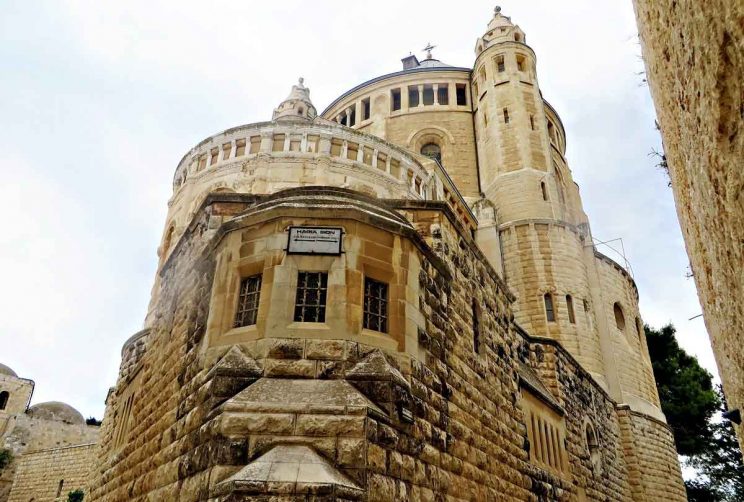 The pilgrim Arculf reported in 700 that he saw a “square church” on the site of the Last Supper and nearby “the spot where the Virgin Mary died”. That spot is where the Benedictine Dormition abbey now stands.

Scripture is silent on Mary’s Assumption into Heaven, never mind when and where it took place. The idea that Mary’s life ended in Ephesus, in modern-day Turkey, is fairly new and not very credible.

It is first mentioned in the fifth century by Nestorius of Constantinople (he of the Nestorian heresy), based purely on the tradition that John the Apostle went to Ephesus, and the attendant presumption that he must have been accompanied by Mary, whom Jesus had placed into the beloved disciple’s care. But the Ephesus idea did not get traction until the 19th century, through the visions of the German mystic Sr Catherine Emmerich (1774-1824).

More credibly, ancient tradition locates Mary’s dormition and subsequent Assumption in Jerusalem, where we last encounter her in Scripture. The “Acts of St John” by Prochurus from around 165 says that John went to Ephesus only after Mary’s death.

It is interesting to note that St Paul makes no mention of John or of Jesus’ mother in his first letter to the Corinthians, which he wrote while he was in Ephesus, nor does he refer to them in his missive addressed to the Ephesians, which he wrote from jail in Rome.

But by then Mary’s earthly life might already have ended. 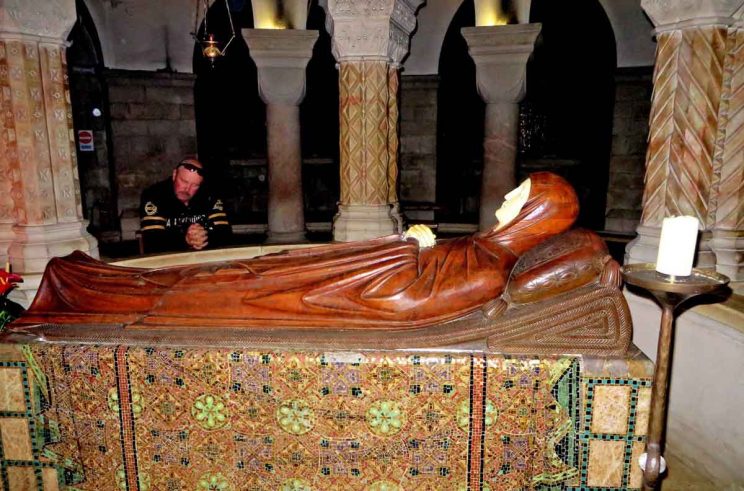 The Transitus Mariae, an apocryphal document based on earlier writings, suggests that Mary was no older than 50 when she closed her eyes.

Presuming that Mary was about 13 when she gave birth to Jesus, and that Jesus was born at the latest in 4 BC (the year King Herod died), then the Blessed Virgin was born around 17 BC. If she was indeed 50 years old when she passed on, then that would have been in the year 33, soon after the crucifixion.

The body of the Blessed Virgin in lifeless repose on a bier is shown in a life-sized effigy of ivory and cherry wood in Dormition abbey. The church also features various artworks portraying the Apostles in mourning over Mary’s body and of the Assumption.

One of these artworks is particularly striking: in it, Jesus is holding his mother, who is wrapped in swaddling cloths — a reversal of the Nativity in Bethlehem.

Dormition abbey, a  fortress with thick walls and four towers which incorporates the older Benedictine Hagia Maria Sion monastery, was built with funding from Germany’s Kaiser Wilhelm II. Completed in 1910, it stands on the site of one of Jerusalem’s earliest churches.

From her home — the site of today’s Dormition abbey — Mary’s body was taken to a tomb at the foot of the Mount of Olives, next to the Garden of Gethsemane. This would be the venue of her Assumption into Heaven.

The remains of the 5th-century church of the Assumption, with the crypt of Mary’s tomb, mark the spot. Unusually for sacred sites in the Holy Land, Catholics have no part in the ownership of it, even though much of what remains was built by the Latin-rite Crusaders.

The crypt is owned by the Greek Orthodox Church, which shares it with the Armenian Apostolic Church, as well as with Syriacs, Copts and Abyssinians — and, remarkably, Muslims.

Muslims have a great devotion to Mary, whom they call Maryam, and regard Jesus, or Isa, as a prophet. In fact, Mary is the only woman in the Qur’an to have a Sura, or chapter, dedicated to her.

In Bethlehem’s Catholic maternity and paediatric hospitals, Muslims often stop to pray before an image of Our Lady, asking for her intercession.

Many churches stood above the crypt of Mary’s tomb and were destroyed, but none of the various Muslim rulers destroyed the crypt itself, because it is the tomb of Maryam. 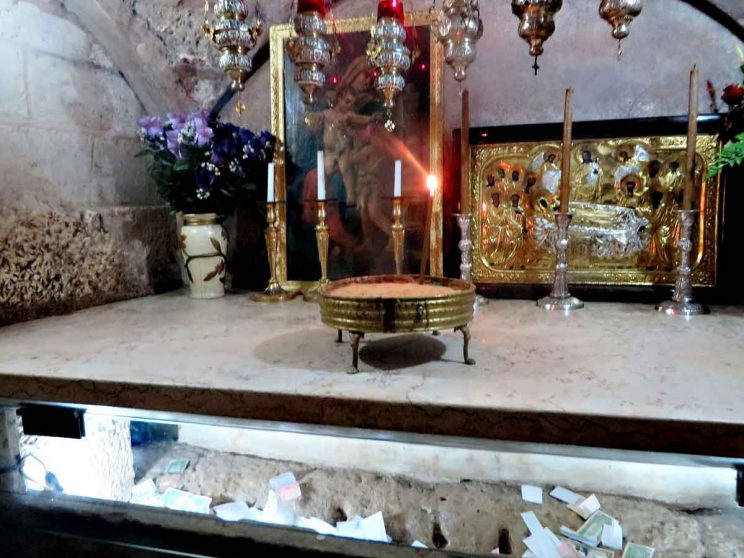 Mary’s tomb at the foot of the Mount of Olives; the rock beneath the altar is the tomb of the Blessed Virgin which the Apostles found to be empty.

To reach the crypt now, one descends 47 broad steps of the remains of the Crusader church. The gloomy crypt’s ceilings are black from centuries of candle smoke and incense, and many icons are so covered by soot that it’s difficult to make out what they represent. To the Western mind, this place is far removed in ambience from the usually light artistic depictions of the Assumption.

Mary’s tomb itself is housed in an edicule, or enclosed shrine. Through holes in a wall, the pilgrim can touch the stone bench on which Mary’s body rested.

St Juvenal, the bishop of Jerusalem, wrote in 451 that Mary’s tomb had been opened in the presence of all the Apostles in Jerusalem — and found it was empty. This is at the core of the belief in the Assumption.

So Mary most likely ended her earthly sojourn in Jerusalem, the city in which her life probably began, as we saw in the first part of this series.

Over three weeks we have visited on this virtual pilgrimage places in the Holy Land where we can locate the historical Mary, all marked with churches and shrines which testify to the great devotion which especially the Catholic and Orthodox Churches have for her.

For all the apparitions that have followed the life of Our Lady and the devotions they inspire, first of all and above everything, we must never forget that Mary was a real flesh-and-blood human being in the story of the Incarnation and our Redemption.

Günther Simmermacher is the author of The Holy Land Trek: A Pilgrim’s Guide.

The Immaculate Heart of Mary in Brief