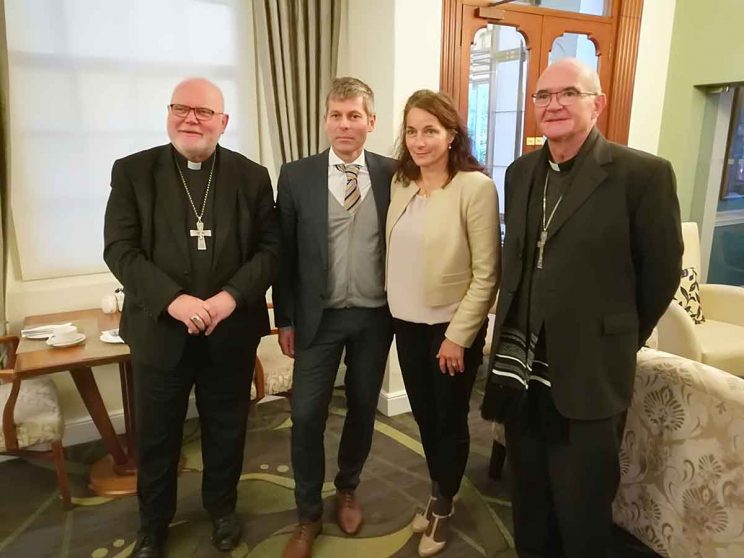 Pope Francis has commissioned four families from the Neocatechumenal Way to become missionaries in the Cape Town archdiocese. The four families — from Brazil, Germany, India and the United States — have concluded their visa processes and will settle soon as part of a new missio ad gentes (“mission to the nations”) to South Africa.

Altogether Pope Francis sent 200 families with 600 children to various parts of the world during an audience to celebrate the 50th anniversary of the Neocatechumenal Way.

The four families appointed to evangelise in Cape Town are the Casaroto family from Brazil, with three children (one of them just born); the Gomes family from India, with five children; the Meza family from the US, with a daughter, and the Hochhäusler family from Germany, with ten children.

Wolfgang and Ursula Hochhäusler from Munich were the first of these families to visit Cape Town — coincidentally just as their archbishop, Cardinal Reinhard Marx, was in the city.

“We are amazed by how the Lord is preceding us in the mission,” said Mr Hochhäusler.

“We made ourselves available for this mission because of the many wonders Christ has done in our lives. We are full of gratitude. He [conquered] all our fears about leaving our country and our comfort. He will show us the way to let many people know his love and mercy.”

Mr and Mrs Hochhäusler received a blessing from Cardinal Marx, who underlined the importance of a missionary presence stable over time.

The missio ad gentes concept was inaugurated in 2006 by Pope Benedict XVI, explained Dino Furgione, coordinator of the Neocatechumenal Way in South Africa.

“Each of these missions consists of a priest, accompanied by four or five families with their children, who, at the request of the local bishop, receive a mandate to evangelise in highly disfavoured areas, or in new areas where the Church struggles to arrive, with the mission to make a Christian community visible,” he said.

“The families and priest all live in the same district where they meet every week for a Word celebration and a Eucharistic celebration.

“The experience in countries where these missions are already operating shows that many people are touched by the songs they sing, the unity they radiate, and how they interact with each other,” Mr Furgione said.

He noted that already in 1985, Pope John Paul II said that in order to provide an answer to secularisation in the modern world, it was necessary to return to the “first apostolic model”.

“The first Christians came together in houses as we can read in the Acts of the Apostles,” Mr Furgione said. “The missio ad gentes imitates this model by coming together in houses in the middle of the non-baptised. They are answering the call Pope Francis has made, for the Church to ‘come out of herself and go to the suburbs, not just geographical but also existential suburbs.’”

Archbishop Brislin of Cape Town said these missions are responding to an urgent need.

“There are so many people in our diocese who are thirsty for God, who seek answers. I am grateful to the families who generously make themselves available to bring their testimony where it is most needed,” the archbishop said.

Celibacy Practised for Love of God

How the Church Determines a True Marian Apparition

God is no Warlord Claiming Victory with Enemies’ Blood