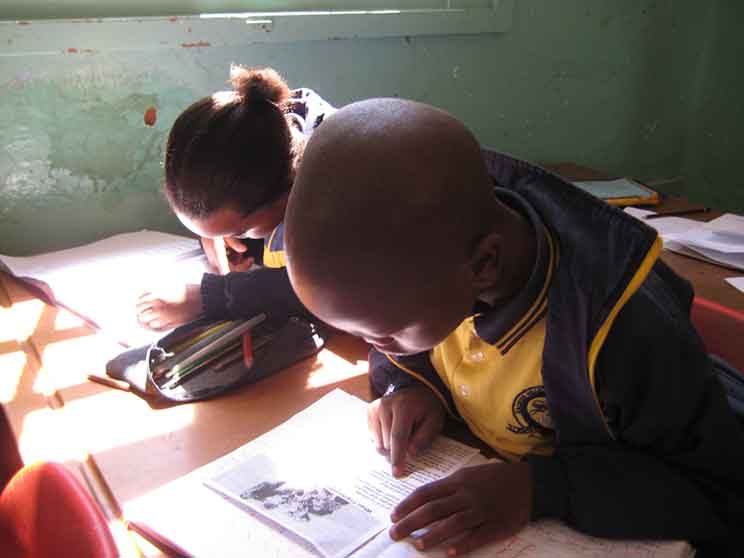 For many rural children the promise of a brighter future after the end of apartheid remains unfulfilled, even today. MDUDUZI QWABE explains the state of rural education in SA, and why that must concern us as Catholics.

Driving on secondary roads around South Africa, one sees many uniformed children walking to school or back home, as transport is entirely lacking or inconsistent.

For many learners in rural schools, there is indeed no transport available, and there are no school nutrition schemes either. Lack of water and sanitation is still a reality, and having one’s own desk at school is a luxury that cannot be taken for granted.

This is the reality despite the government claiming that access to education has improved dramatically since the dawn of democracy.

The Constitution guarantees the right to quality basic education, and subsequent court rulings have asserted that this right should be immediately realisable. However, that right is elusive in many rural communities in our country.

The 2014 Child Gauge released by the University of Cape Town’s Children’s Institute concedes that access to education is still a challenge for children living in remote areas, where access to public transport is lacking and households are unable to carry this cost.

The definition of “rural” for present purposes will be that of “remote places away from amenities such as shops, tarred roads, and street lights”. Yes, I acknowledge that the challenges experienced by rural learners are also still prevalent in many townships or informal settlements, but in this article I wish to focus on the typical farm school.

The democratic government of 1994 faced many organisational challenges when it took over the amalgamation of the different educational departments which operated under the apartheid state.

These included providing equal and non-discriminatory education to all the country’s citizens.

It was assumed that the inequalities in the system were uniform and to the same degree in all areas of society. However, in several studies undertaken in the first years of the 21st century, it became clear that rural communities were most severely affected by the injustices of the previous regime, compared to their urban counterparts.

The Ministerial Committee Report on Rural Education of May 2005 was one such study. It made 82 recommendations on how to deal with the challenges faced by these communities in order for them to access quality education.

It highlighted the fact, among others, that simply treating “unequals” as “equals” would perpetuate the inequality. This resulted in the establishment of a Rural Education Directorate in the Department of Education in 2006 to deal with issues raised in the report.

The life of this directorate was cut short in 2010 when it was assimilated into the department, with the rationale that the same issues faced by rural communities were experienced in peri-urban and informal settlement schools so it would be better to deal with them across the board.

A few of the report’s recommendations were implemented, for example, children from farms were moved to boarding schools in certain provinces, although this raised issues of whether the rights of children and parents were observed.

The state justified its actions by saying that it was protecting the rights of children to education while also mitigating the effects of poverty experienced in the children’s homes. A number of studies showed that there were violations of other rights in the process and this practice could not be justified.

There were also incentives in the form of monetary allowances given to teachers working in rural areas, but this was not implemented uniformly or consistently by provinces.

Through certain government programmes like the Accelerated School Infrastructure Delivery Initiative and even non-profit organisations like the Nelson Mandela Children’s Foundation, new schools were built and existing ones renovated.

Other programmes, such as learner transport and school nutrition, were also introduced, not only for farm schools, with the intention of improving overall access to education.

Poor planning and lack of capacity led to constant disruptions, budgetary constraints, and slow delivery of new/renovated schools in many provinces. This has left the department with huge backlogs in the delivery of quality education to rural communities.

The inequalities that were inherited from our painful past persist 21 years later. But we need to be careful not to assess rural communities only from a deficiency outlook as there are also many positive developments happening in some of these communities—but the challenges remain.

The 2013 National Education Evaluation and Development Unit report shows that some of the challenges that were cited in the 2005 report remain just that.

The 2013 report, which investigated teaching and learning in rural primary schools, cites the biggest challenge as the lack of qualified teachers in rural schools. Teachers often live far from the school and this has implications, given the lack of adequate transport and poor road infrastructure.

Many of these teachers are involved in multi-grade teaching, which the report finds is of very poor quality in certain instances.

According to the report, 38% of these schools’ toilets are unsanitary and the recent incidents of children drowning in pit latrines is a confirmation.

In 2012-13, the public interest law centre Section 27 undertook a review which attested to the fact that many children in Limpopo live far from school, are sitting in overcrowded classrooms, have to walk long distances daily, and have to contend with poor infrastructure—but they are expected to perform at the same level as children whose reality is different.

Many argue that the problem of resources is not a determining factor of performance, yet the question remains whether it is fair to expect children and teachers to function under such circumstances? Some schools in poverty-stricken areas do well with very little, but they are few and their success cannot justify the general inequitable distribution of resources.

Reports show that neither the Reconstruction and Development Programme nor the Growth, Employment and Redistribution economic strategies were successful in addressing the inequalities perpetuated under apartheid.

The adoption of the Minimum Norms and Standards for School Infrastructure regulations in 2013 by the Department of Basic Education is a step in the right direction, but it is alleged that the department intends cutting the infrastructure budget by at least R3,5 billion over the next three years.

In 2016 the department set up a task team to research and draw up a rural education policy to ensure that the situation be addressed. The Catholic Institute of Education was part of the reference team to which the task team reported regularly and discussed all aspects to be included in the policy.

What’s to be done?

Our collective Christian calling from scripture and Catholic Social Teaching is to always protect the most marginalised members of our society, which in this regard are the rural communities that suffered and continue to suffer well into our democracy.

It is our Christian duty as part of civil society to hold the government accountable and ensure that the persistent inequalities are eradicated. If we are committed to building a humane society, as our Constitution requires, then we do not have a choice.

Mduduzi Qwabe is manager for policy, advocacy and government relations at the Catholic Institute of Education.

The State of Education in South Africa

How Do We Combat Violence in Schools?