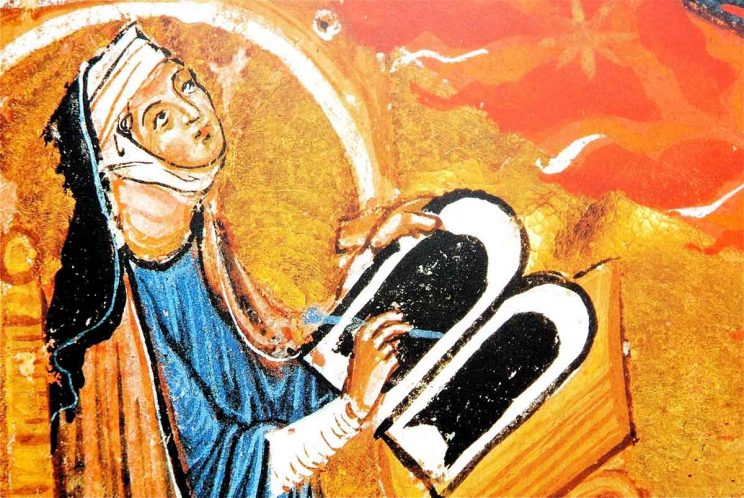 Sometimes we don’t know what we don’t know. I realised this recently at the “Amaz!ng” National Arts Festival in Grahamstown.

For me this is an opportunity to enjoy more of what I know and like; but I also make a point of seeking out dance and music and theatre that I don’t know or recognise.

I was thus drawn to a musical programme that was advertised as featuring works by only female composers. The one name I did recognise was St Hildegard of Bingen, though even then I realised how little I knew about her. But I checked on Wikipedia!

She lived 900 years ago in an age when a widely respected male theologian, Hugh of St Victor, could write something like this: “Woman is made so she is not only inferior by obedience but by nature.” Imagine if a priest tried to say that in a pulpit today!

Hildegard proved them wrong. She was an abbess, in charge of a major monastery, and author of a range and scale of works that would outshine most men of her age and ours.

That included three great volumes of visionary theology, a variety of musical compositions for use in liturgy, a musical morality play, one of the largest bodies of letters (nearly 400) to survive from the Middle Ages, records of many of the sermons she preached, two volumes of material on natural medicine and cures, an invented language and a Gospel commentary.

No wonder that her fellow-German polymath Pope Benedict XVI declared her a saint and a Doctor of the Church.

She was the starting point for this concert whose title came from the description that St Bernard of Clairvaux used when he first heard Hildegard’s music: “A feather on the breath of God”.

The programme was put together by Rhodes University honours student Emma Farquharson, who has been researching women composers. She not only compiled it but sang all the works with a beautiful voice that more than lived up to the title.

And it was performed in the Nun’s Chapel at Rhodes University, recalling not only the Anglican Sisters of the Community of the Resurrection who have served here, but all the women religious who have served humanity with such generosity for almost 2000 years.

For Ms Farquharson, Hildegard was key to unlocking this musical treasury and reflected the deep spirituality of all the works performed, liturgical and secular.

In the “Antiphon to the Holy Spirit”, for which Hildegard wrote the words and the music, we get a glimpse 900 years earlier of the modern-day idea of referring to the Holy Spirit as “she”: “The Holy Spirit is living and life-giving, creates, cleanses, frees us from guilt and heals us.” Certainly, attributes we more commonly associate with the female spirit than the male.

We were listening to long-silenced voices, but what was striking was how empowered the women were. I have often listened to and performed madrigals (songs of love) from the Renaissance. What was different about these ones was that the women were not sad objects of pity (nor goddesses to be worshipped) but real human beings with real emotions.

Perhaps the most striking piece was the opening chant — which rang out to the audience across 12 centuries. In it we heard the voice of the fallen woman calling to God for forgiveness: not because a male priest has reprimanded her but because her own soul has realised her error and wants to be reunited with God.

The concert prompted me to reflect on how rarely we hear the music — and thus the voices — of women composers. We have a few Church exceptions — from the 19th century CF Alexander, more recently Margaret Rizza or Bernadette Farrell — but generally in churches and in concert halls there is a big gap.

In her own research, Ms Farquharson has found over 150 women composers who had stature in their time but who have since been forgotten. She performed works by ten of them, from the year 800 AD to the present day, from modern-day Turkey across Europe to the USA. There were composers of Byzantine music, female troubadours (“trobairitz”), court musicians and concert hall artists.

But in almost every case their names — Kassiani, Strozzi, Caccini, Cheney Beach, Farrenc — have been lost while their male contemporaries (who may or may not have been more talented) are remembered. The only name that I recognised was that of Mendelssohn—but that’s because Felix is celebrated while his sister Fanny is overlooked.

Sadly, Fanny’s story is repeated in the lives of other women composers: she grew up as a highly-regarded composer and performer — often outshining her brother — but her father and then her husband prevented her from making it her profession.

Gifts from the Life-Giving Holy Spirit

Does this matter? I would argue that it does. There have been women throughout history who achieved great things but have then been written out by (male) historians; they need to be rediscovered and reclaimed. A few have come down to us but there are many whose names we do not know.

I was delighted to hear that my friend’s daughter chose the name Joan at her recent confirmation. When asked by the bishop why, she replied: “Because she is an early feminist.” But there were other strong women in Church history whose names are less well known.

Women from the past can inspire modern women (and men) and push us on to work harder to ensure that the gifts of half of the world’s population are recognised and given a chance to shine. We no longer are surprised, I hope, by women as presidents, CEOs, doctors, engineers and architects.

But women are still under-represented in all these areas and completely excluded from some areas of life and certain institutions.

And yet, when given the chance, women are clearly capable of at least as much as men — if not more.

A few years ago in Britain, for the first time there were more women than men who were graduating as doctors, lawyers and even (Anglican) priests.

The words of one of the composers, Maddalena Casulana from 500 years ago, sadly still have relevance today: “I want to show the world the vain error of men that they alone possess the gifts of intellect and artistry and that such gifts are never given to women.”

To suggest that parts of humanity are excluded from certain gifts because of their gender (or their colour or their birth) is to insult the very living and life-giving Holy Spirit whom Hildegard’s poignant notes were praising.

Emma Farquharson would be keen to hear from anyone who wants to know more about her research. Contact her at forestsong@gmail.com