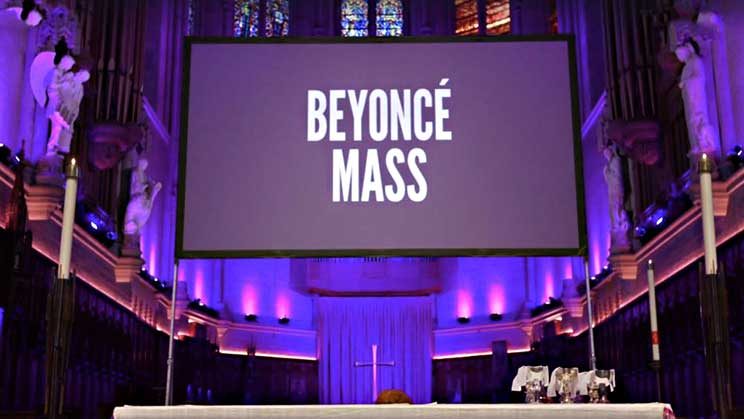 ‘I  neglect you when I’m working; when I need attention, I tend to nag…I don’t know why you love me, and that’s why I love you.”

These are the lyrics to the song “Flaws and All” by Beyoncé. People have wondered whether she is singing about her relationship with her fans or her husband Jay-Z, or whether maybe she is actually singing a song about God.

This came to my mind when I read recently that the Anglican cathedral in San Francisco was organising a “Beyoncé Mass”.

Having read several news articles and watched different clips of what happened at the “Beyoncé Mass”, I found it to be a different and strange-but-wonderful way of getting people to church. The Mass, which was based on Rev Yolanda Norton’s “Beyoncé and the Hebrew Bible” university course, drew about a thousand people.

A choir performed various Beyoncé hits at the service, including “Survivor” and “Freedom”. The Mass also included Scripture readings and a sermon by Rev Norton.

Beyonce Mass – Thinking Out of the Box

I commended the Anglican cathedral on my social media for thinking out of the box. Of course, some people saw the Mass as a way of “worshipping” the pop idol.

But I believe that this idea could be a way for us Catholics to loosen our collars and draw people, especially the youth, to the Church.

Rev Norton, who is an assistant professor of the Old Testament at the San Francisco Theological Seminary, said that when she preached her first sermon at the age of 24, people had a lot of opinions about who she was supposed to be. She recalls being told that she should listen only to gospel music and dress a certain way. Rev Norton said she felt like she was becoming something she was not. It was compromising her relationship with God and her life was at a tipping point. She even considered abandoning the ministry.

For me this is a lesson for the lot of us. I am close friends with a few priests and religious throughout South Africa and globally. Some of them tell me that they are no longer happy in their ministry.

One priest told me that he felt like his life was being controlled by his parishioners. He couldn’t do or say anything without it being rectified by the parish council. When he tried initiating something youth-friendly for one of his youth Masses, some of the older parishioners complained about it.

I Wear Ties to Church

Speaking as a Catholic who religiously wears a tie to church, I think it is time we loosen our collars a little and allow for dynamic reform to take place in the Church’s attitudes.

How appealing are we truly to the young people in our parishes? Do they really want to be at Mass on Sundays, and is their faith growing as they sit in the pews or serve in ministry — or are they sitting there dying a slow death internally?

I am not suggesting that God cannot bring people to himself without the glitz and glamour of what pop culture and the world has to offer. However, as we serve in ministry, it is good to also allow God’s call to be extended to those who have ignored traditional methods. And as our newly ordained priests and deacons heed the call to minister, may we support them in their radical but Spirit-led decisions.

As we watch with bated breath to see who will walk away as football world champions, my mind goes back to 2010, when the World Cup was hosted in South Africa.

I remember the Catholic Church, with the help of Fr Francois Dufour SDB, drawing up a helpful guide of the Mass and churches for football fans to visit for worship, under the title “Church on the Ball”.

I also remember fondly “Soccer Sunday”, when our church was decorated and our parish priest came running into the church with a bright yellow chasuble with some Bafana Bafana regalia on it.

For some of the parishioners this was too radical an approach; others told the priest that it was a sight for sore eyes.

Does the Church Cater for the Elderly Only?

We do well to take note of what a Catholic friend told me recently: “It is quite sad that the Church caters so much for the elderly in our parishes, forgetting that the youth are the future.”

Of course, our parishes must be a welcoming home for older Catholics. However, church should be a place where our young people desire to be as well.

And if that means creating something crazy like a “Beyoncé Mass” — provided it accords with the rubrics — then why not? After all, Jesus used wild and crazy parables to minister to the multitudes.

Let us allow the Holy Spirit to lead us — and for our priests to loosen their collars (for us to follow suit) — to guide reform and charismatic healing as people are drawn to God, and ultimately their eternal salvation in Christ.