Vatican Calls for Prayers and Support for Seafarers 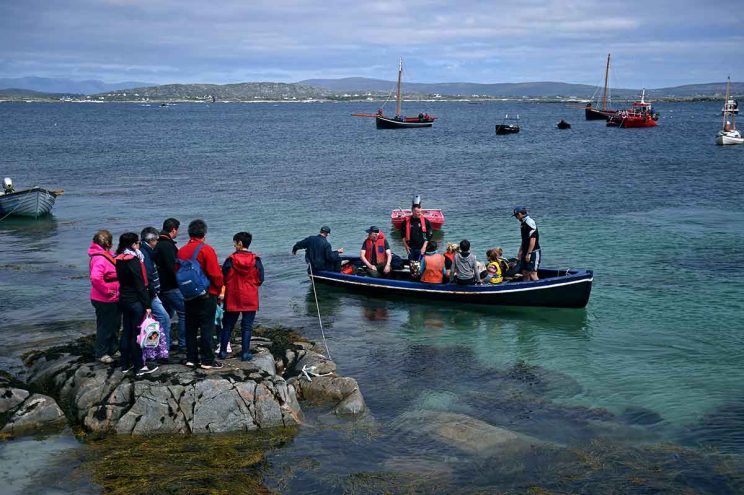 Seafarers and other worshippers from Carna, Ireland, are seen during the annual pilgrimage to MacDara’s Island to celebrate Mass in honour of St. MacDara, patron saint of fishermen. The pilgrimage is believed to keep seafarers safe throughout the year. (CNS photo/Clodagh Kilcoyne, Reuters)

The Vatican invited Catholics to pray for the 1,2 million seafarers around the world who work under difficult conditions and make huge sacrifices in their profession.

Seafarers “play a significant role in our global economy by transporting from one corner of the world to another 90 percent of all the goods we use in our daily life. For this reason, today while we pray for all of them wherever they are, we would like also to express our gratitude for their tough work full of sacrifices,” said a message for Sea Sunday.

In the message, Cardinal Peter Turkson, prefect of the Dicastery for Promoting Integral Human Development, invited Catholics around the world to remember seafarers and the sacrifices they make.

Those working at sea are “forced to live for several months in the confined space of a vessel, away from their families and loved ones, missing the most important and meaningful events in their families – birthdays, graduations, etc. – and failing to be present during times of trials and difficulties, such as sickness and death,” he said in the message.

Other challenges they face include:

— Inadequate time to rest and relax when the ship is in port.

— Difficulty in getting permission to go ashore because of company policy or because of “restrictive and discriminatory regulations imposed by governments.”

— Denied access to the ports and vessels for many chaplains and volunteers with the Apostleship of the Sea and Stella Maris Centers.

— Violence and piracy at sea.

— Vessels and their crews being abandoned in foreign ports, often with unpaid salaries, without food and fuel provisions for the vessel, or without proper documentation making their immigration status uncertain.

He called for the full implementation of amendments to the Maritime Labour Convention and respect for the convention’s spirit that would concretely improve the well-being of all seafarers.

The cardinal also supported efforts by the International Maritime Organisation “to prevent and significantly reduce marine plastic pollution from the shipping sector and in curbing greenhouse gas emissions from ships, as it implements other regulations that will mandate cleaner-burning fuels at sea.” By Carol Glatz Catholic News Service