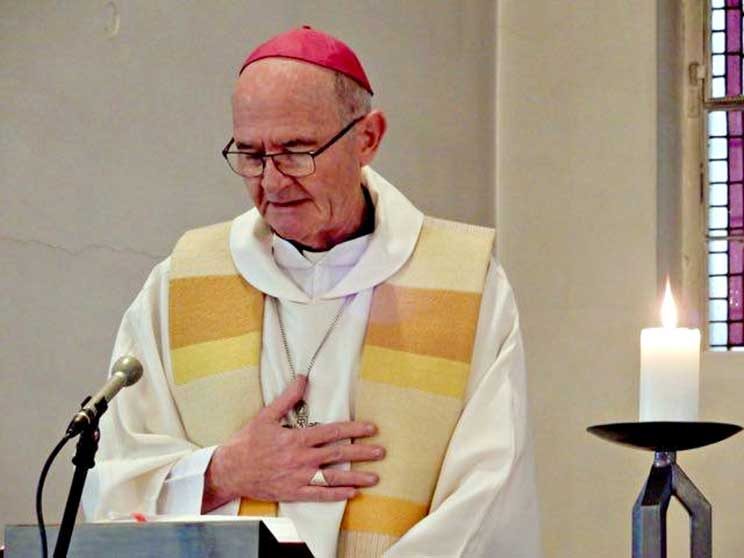 Archbishop Stephen Brislin of Cape Town, seen here addressing the bishops’ conference plenary in Mariannhill, has spoken out about the serious need for a new media approach by the local Church.

The president of the Southern African Bishops’ Conference has called for the development of a media strategy for the local Church, with the help of professional journalists.

Addressing the bishops at their August plenary in Mariannhill, Archbishop Stephen Brislin of Cape Town referred to the Southern Cross editorial of July 4, which raised problem areas in the SACBC’s social communications.

He commended the work of Archbishop William Slattery as SACBC spokesman and Fr Paul Tatu CSS as social communications officer, as well as statements issued by the Justice & Peace Commission, but also acknowledged structural weaknesses.

“As bishops we need to clarify our vision for communications: What do we want it to be and how should it operate? What do we actually want to communicate?” Archbishop Brislin said.

“Our communications action is not meant to be ‘image management’ — simply trying to put out a good image of the Catholic Church, as if it were some sort of advertisement, trying to make a name for ourselves, or trying to draw attention to ourselves,” he said.

“Secondly, our communications  action is not meant to be ‘spin’, a biased version of the Church’s actions and events. It is not a cover-up or disguising the truth, it is not fake news.”

The archbishop noted a need to issue statements on current affairs, but counselled that “the Church is not a political or social commentator, and we must resist the temptation to slip into that role”, adding that “the issues we comment on should be carefully selected and thought out, with a purpose in mind”.

Archbishop Brislin pointed out that the SACBC’s statements “tend to be reactive rather than proactive…yet the Church should be taking the lead on issues of ‘faith and morals’, broadly defined, and attempting to influence thinking and public opinion for the common good”.

“We do not have to comment on everything, and what we do respond to should be selective and well thought-out,” he told the bishops.

“Our communications action is meant to be positive, formative and proactive. It is meant to interpret the ‘signs of the times’ and — with a humility devoid of superiority — to direct human effort to the basic virtues and values. It should bring people to the realisation that there is a different way of looking at the world and that solutions to the world’s problems are possible, solutions that protect the dignity of life, that lead to equality and that normalise relationships,” Archbishop Brislin said.

“It is a message of hope, not through proposing particular systems or processes, but by calling forth the goodness that is abundant in the world and in the hearts of so many. Our teaching is rich and positive, yet is often reduced to superficiality not only by others but even by ourselves.”

Calling for a more creative use of the various media platforms, the archbishop said: “We may decry the fact that our communiqués do not receive attention from the secular media but we must create our own platform to get our message out, which is perfectly possible in this day and age.”

He noted that a new approach to media would require a team of “two or more bishops, an employed professional journalist, and experts to form the ‘think tank’”.

“Nothing will be achieved unless the conference is prepared to make available resources in terms of personnel and finance. The question is, do we see communications as important enough to do this, do we have the boldness to do it and do we have the capacity to do it?” Archbishop Brislin said.

Where is Church’s Public Profile?

Big Bang to be Named in Honour of Priest

Do the Bishops Read Our Comments?