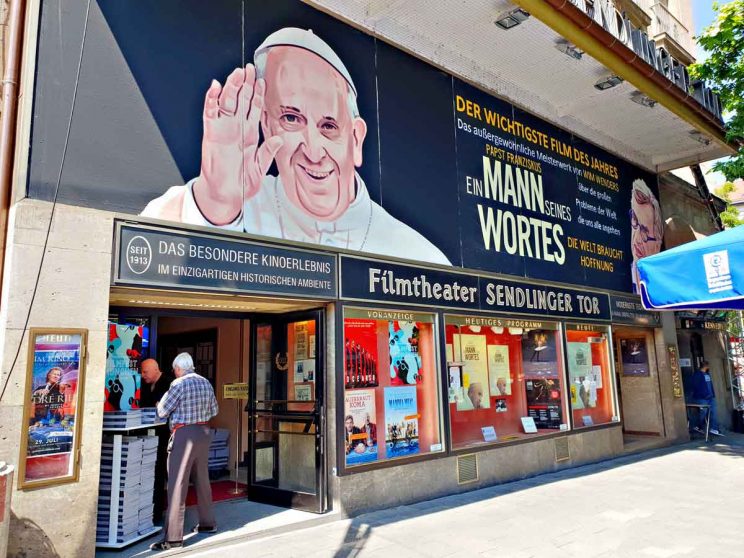 A cinema in Munich, Germany, advertises the screening of the widely acclaimed documentary film Pope Francis: A Man of His Word by the award-winning German director Wim Wenders. Neither of South Africa’s two cinema chains have plans to screen the film in this country. (Photo: Günther Simmermacher)

A  critically acclaimed documentary about Pope Francis by award-winning director Wim Wenders will not go on circuit in South African, or any African, cinemas anytime soon.

The feature-length documentary Pope Francis: A Man Of His Word, which was lauded by film critics worldwide, will not come to Africa because the international distributors have no plans at present of bringing it to the continent with the world’s fastest-rising Catholic population.

“We don’t do any distribution from our side,” a spokesman for the South African cinema chain NuMetro told The Southern Cross.

“If the film is not going to show in Africa, it is because the producers [of the film] didn’t request to have it distributed in Africa.”

Focus Features, the US-based international distributors of Pope Francis: A Man Of His Word, were unable to comment by the time of going to press.

Public Reaction to the Film

Vatican News  wrote of the film: “In an era of deep distrust of politicians and people in power, Pope Francis: A Man Of His Word shows us a person who lives what he preaches and who has gained the trust of people of all faith traditions and cultures across the world.’’

In 2013 Mr Wenders was approached by Mgr Dario Viganò, who was then the head of the Pontifical Council for Social Communications, to make a film about Pope Francis. Mr Wenders—a Catholic who has directed cinema classics such as Wings Of Desire, Buena Vista Social Club and Paris, Texas— was given full creative control by the Vatican, regarding the approach and final cut of the film.

He was also given uncommonly open access to Pope Francis as well as the Vatican’s own footage of Francis’ pontificate.

The film showcases Pope Francis in intimate interview settings, intercut with footage of the pope visiting a variety of world locations including a refugee camp on the Greek island of Lesbos, typhoon-devastated Philippines, a volunteer-run hospital in Central Africa, and prisoners in Rome.

Mr Wenders explained his intention behind the intimate nature of the interviews, often with the pope staring directly into the camera. “As an audience, you’re now really eye to eye with Pope Francis, literally,” he said.

He has described Pope Francis as “the most fearless man I ever met”.

“Fearless! And he is not influenced by polls or whatever. I don’t think he would ever consider any public opinion over something he means and he’s convinced of. He’s totally fearless. Because he has a lot of opposition,” he told US television programme 60 Minutes.

Reviews of the film have noted it is not a critique or a recounting of the life of Pope Francis. The movie reviews website A Historic Moment said it is “a significant non-fiction film, as it is not a biography about the Pope, rather a film with him”.

Catholic News Service film reviewer John Mulderig said of the film: “This is a work of high quality that can be recommended for a wide range of age groups.”

Decent Films, a Christian film review website, wrote: “St Francis of Assisi has long been among the most beloved of Catholic saints, even among those who don’t share his faith, and his most consequential 21st-century namesake remains popular among both Catholics and non-Catholics. Wenders sets out to connect the dots between the medieval Italian friar and the 21st-century Argentinian pope, making the case that behind their widespread appeal is a message the world needs to hear.”