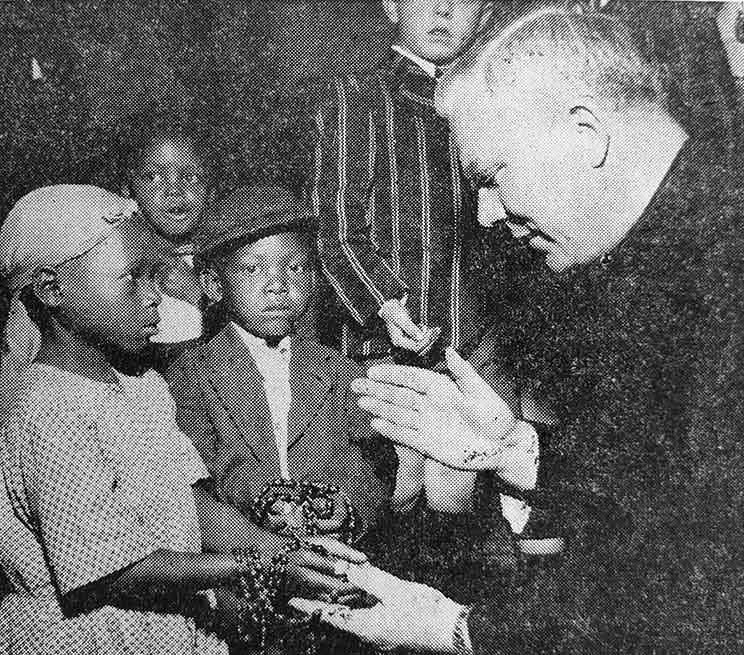 Fr Patrick Peyton blesses the rosaries of children at Holy Cross mission in Alexandra, Johannesburg, during his long tour of South Africa in 1955.

Fr Patrick Peyton (1909-1992) was a dynamic advocate for family prayer and a trailblazer in radio broadcast and televised evangelisation. Along with promoting prayer in his shows, Fr Peyton held “Rosary Rallies” around the world—from Peru to the Philippines to Papua New Guinea, and in 1955 in South Africa—earning him the title that he still bears to this day: “The Rosary Priest”. (CNA)

When Fr Patrick Peyton toured South Africa from March to June 1955, he drew around 187 000 people to his various events.

And on his 70-day, 20000km-long tour, the “Rosary Priest” didn’t just visit the usual urban centres, but also places off the beaten track such as De Aar, Upington, Glen Cowie, Aliwal, Lydenburg, Nelspruit, Ladysmith, Vryheid and Maria Ratschitz, as well as Roma in Lesotho.

But he also spoke to smaller groups, such as the 500 who turned out at Maria Ratschitz mission in KwaZulu-Natal, where a temporary Lourdes grotto was erected for the occasion.

The Effect of His Campaign

At the height of the apartheid regime’s fear of the Roomse gevaar, Fr Peyton was welcomed by officials such as mayors, assorted senators and other dignitaries of the state.

And, of course, all the bishops of South Africa were galvanised by Fr Peyton’s tour — especially at a time when the Catholic school system was under threat from the Bantu Education Act.

With that in mind, Archbishop Denis Hurley of Durban noted in his Lenten letter that “it seems a special arrangement of Divine Providence” that Fr Peyton’s Family Rosary Crusade should be preached in South Africa “at a time when we so grievously need the help of God and the prayers of his Blessed Mother”.

A huge fundraising campaign later that year exceeded all targets and safeguarded the Catholic schools.

An article by Andrew Murray, the urbane managing editor of The Southern Cross, examined the power “behind the magnetic appeal” of Fr Peyton.

“It is not the oratory,” Mr Murray found. “He speaks quietly into the microphone in his west of Ireland accent, his huge frame stooping forward slightly, and in cold print his words may seem trite — even sentimental.”

However, Mr Murray wrote, “when Fr Peyton says ‘O God, You are real. You exist’—platitudes in print—the tremendous implications of the truth which have become stale to most of us because of the laziness of our minds and poverty of our imagination are suddenly brought home to his listeners with an almost unbearable poignancy.”

If it was not the oratory that moved many in the crowds to tears, then “it could be sanctity—or something very close to it”, Mr Murray wrote.

“It seems as if God is speaking through a man who has seen him, who has been at once dazzled and illuminated interiorly.”

Father Peyton’s schedule was punishing, even for a man of just 46. Apart from his rallies, he visited countless Catholic institutions (schools, convents, children’s homes, and so on), interacted and prayed with clergy, and attended official functions thrown for him by bishops and mayors.

Some of these pastoral visits attracted huge crowds in their own right. At Oakford Priory in Verulam, near Durban, a thousand schoolchildren of all races came together to pray with Fr Peyton.

On a hospital visit in Cape Town somebody stole his rosary. The culprit, it turned out, was a blind, deaf and dumb girl named Tina. Fr Peyton’s own miraculous recovery from advanced tuberculosis—he told the story of that many times on his trip—gave him an extra empathy for patients. His “stolen” rosary was in good hands.

As he boarded his flight to Nairobi at Johannesburg’s airport, Fr Peyton thanked “everyone in South Africa for all that they have done to ensure the success of the Family Rosary Crusade”, and paid tribute to “our good Catholic people for the response that they gave to this appeal for the Daily Family Rosary in every home”.

Fr Peyton reserved a special word of gratitude for The Southern Cross, “which has done so much to give publicity to the Crusade”.