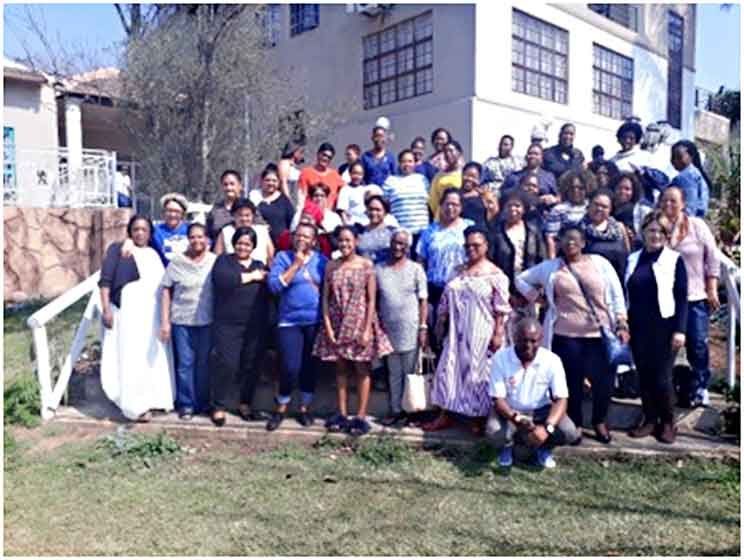 The archdiocese of Durban’s Justice & Peace Commission hosted a conference for young girls and women.

By Kalie Nathanael – The month of August nationally is dedicated to women, and Durban archdiocese’s Justice & Peace Commission has made hosting a conference on young girls and women an annual event.

This year, with 70 participants, the meeting was held at Albert Falls Conference Centre in Pietermaritzburg.

Motlalepula Radebe, deputy director-general of the Kwazulu-Natal treasury, was the guest speaker. She encouraged women to stand united, seek recognition, and become managers in state departments.

Among the key issues discussed was the Church’s response to domestic violence. Participants debated the role of parish pastoral councils and priests in helping victims of domestic violence by forming support groups, and building trust so that abused women could speak out, seek help, and have a plan of action.

The conference also looked at violence against women in larger society, and suggested ways the Church could help by forming support groups, creating more awareness, offering prayer walks, and hosting spiritual upliftment retreats, and even sporting events for women.

Regarding South Africa’s rape culture, participants said that in many households rape by a family member who is senior or a breadwinner is allowed and understood. However, rape leaves terrible scars, and many victims may not recover.

Women at the conference said that, especially in Kwazulu-Natal and Eastern Cape, ukuthwala — abducting young girls and forcing them into marriage — is widely accepted. But, they said, it is actually a form of abuse of young girls by family members and elderly men.

Though sleeping with a girl younger than 16 is legally regarded as rape, the police do nothing, and even the justice system fails these girls, who tomorrow could have been the doctors, nurses, teachers and police officials the country desperately needs. Participants agreed that action by the Church alone, without the police and justice system, would not be enough.

Discussion then turned to how to recognise abused women and how to help them. Women to watch out for are those who go into their shells, don’t communicate easily, are depressed, get aggressive, make excuses, act extra-happy, have jealous husbands or boyfriends. At parish level, women can help by being friendly, and being available when others need them. Workshops, gym/exercise, and relaxing were also ideas.

Teenage pregnancies were another key topic at the conference. Participants said parishes should start organising health desks, to talk about the dangers of HIV/Aids and sexually-transmitted infections. Teenagers also need to be spoken to about the effects of their actions on their families, and the Church practice of no sex before marriage should be discussed during confirmation classes.

Wrong on Women in the Church

Women to Join in Prayer Across Globe