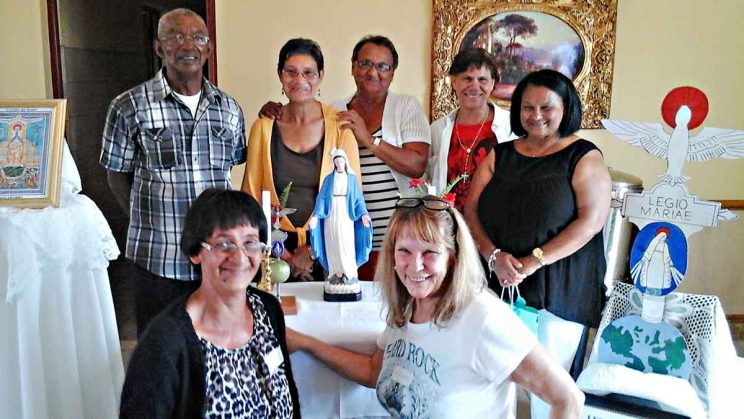 The Legion of Mary, founded in Dublin, Ireland, in 1921, and in South Africa in 1933, has celebrated its 85th anniversary in Port Elizabeth, the country’s oldest basic unit or praesidium.

The Legion was founded in South Africa by Dominican Sister Helena Raleigh, bringing to fruition the desire of Bishop Hugh MacSherry.

Irish-born Sr Raleigh was prioress of Holy Rosary convent in Port Elizabeth, and, in a 1932 letter to Legion founder Frank Duff, she acknowledged the role of the organisation in her vocation.

With the blessing of her parish priest Fr Brassil, she inaugurated the Legion’s first meeting on September 8, 1933, with the praesidium dedicated to Our Lady of Victories.

The Legion was required to meet every week by Fr Brassil. After fulfilling that condition, it could nominate its first president, Joan Wilson.

From Port Elizabeth the Legion spread quickly to other parts of South Africa. By 1934, a praesidium was founded in Johannesburg.

The Legion Serves in 170 Countries

The Legion of Mary is defined on its website as “a lay apostolic association of Catholics who, with the sanction of the Church and under the powerful leadership of Mary Immaculate, Mediatrix of All Graces, serves the Church and their neighbours on a voluntary basis in about 170 countries”.

The objective of the Legion is to prioritise “the spiritual and social welfare of each individual”, the website explains.

“The members participate in the life of the parish through visitation of families, the sick, both in their homes and in hospitals, and through collaboration in every apostolic and missionary undertaking sponsored by the parish.”

At the weekly meetings, members are assigned apostolic tasks.

Those interested in becoming members will, after a period of successful probation, be asked to make a “legendary promise”, which is directed to the Holy Spirit. Finally, they are able to officially form part of the praesidium, and participate in assigned apostolic duties.

Robert Febana, senatus of the Legion of Mary in the Southern Cape, said it does mostly charity work and “looks at the lapsed Catholics and those who are far away from God, and focuses on  bringing them through Mary to Jesus”.

“The Legion doesn’t work only with Catholics but also with non-Catholics and those who want to know God,” Mr Febana explained.

“It also does community-related work, including hospital visits, and visits to prisons and broken homes. The Legion visits the sick at home too, especially those who are disadvantaged. It also looks at immigrants who have come into South Africa, and what struggles they may face here.”